Pandemic surges again in many parts of the world, fuelled by variants

A year and a half since it began racing across the globe with exponential efficiency, the pandemic is on the rise again in vast stretches of the world, driven largely by the new variants, particularly the highly contagious Delta variant first identified in India

By Hannah Beech and Livia Albeck-Ripka 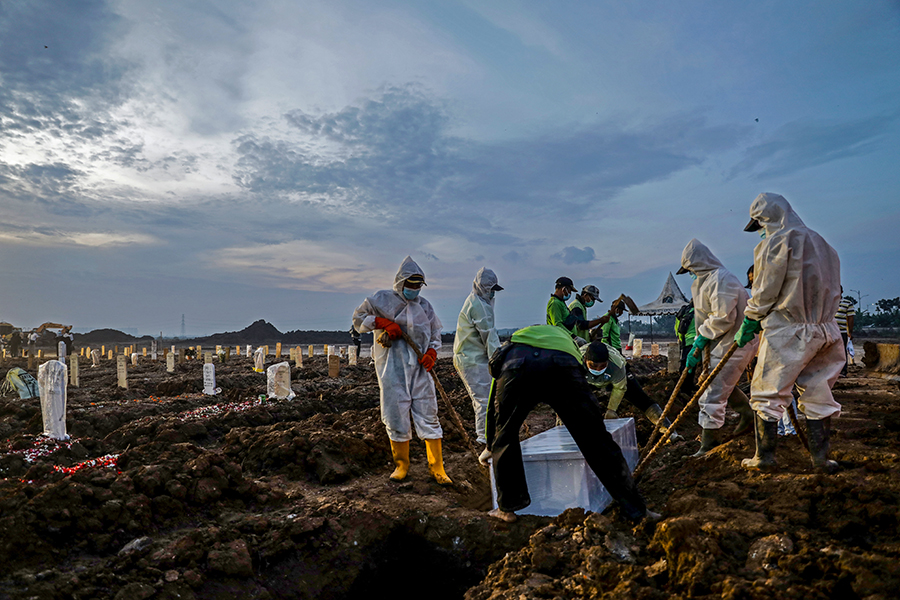 The nightmare is returning. In Indonesia, grave diggers are working into the night, as oxygen and vaccines are in short supply. In Europe, countries are slamming their doors shut once again, with quarantines and travel bans. In Bangladesh, urban garment workers fleeing an impending lockdown are almost assuredly seeding another coronavirus surge in their impoverished home villages. And in countries like South Korea and Israel that seemed to have largely vanquished the virus, new clusters of disease have proliferated. Chinese health officials announced Monday that they would build a giant quarantine center with up to 5,000 rooms to hold international travelers. Australia has ordered millions to stay at home.  A year and a half since it began racing across the globe with exponential efficiency, the pandemic is on the rise again in vast stretches of the world, driven largely by the new variants, particularly the highly contagious Delta variant first identified in India. From Africa to Asia, countries are suffering from record COVID-19 caseloads and deaths, even as wealthier nations with high vaccination rates have let their guard down, dispensing with mask mandates and reveling in life edging back toward normalcy.

Scientists believe the Delta variant may be twice as transmissible as the original coronavirus, and its potential to infect some partially vaccinated people has alarmed public health officials. Unvaccinated populations, whether in India or Indiana, may serve as incubators of new variants that could evolve in surprising and dangerous ways, with Delta giving rise to what Indian researchers are calling Delta Plus. There are also the Gamma and Lambda variants.  “We’re in a race against the spread of the virus variants,” said Professor Kim Woo-joo, an infectious disease specialist at Korea University Guro Hospital in Seoul.  The political debates underway from Malaysia to the Seychelles — whether to institute lockdowns and mask requirements — are starting to echo in countries with far more resources, including plentiful vaccines. On Monday, health officials in Los Angeles County, where Delta variant infections are climbing, urged residents, even immunized ones, to wear masks indoors. (Many scientists, however, say masks are not necessary in areas where the virus is not widespread.) But while the new images from Nepal or Kenya of overflowing intensive-care units and dying doctors dredge up terrible memories for the West, it is not clear whether they also provide a glimpse into the future.  Most existing vaccines appear to be effective against the Delta variant, and initial research indicates that those who are infected are likely to develop mild or asymptomatic cases. But even in the wealthiest countries — except for a handful of nations with small populations — fewer than half the people are fully vaccinated. Experts say that with new variants spreading, markedly higher vaccination rates and continued precautions are needed to tame the pandemic.  The smoke rising once more from crematories in less affluent nations has highlighted the gulf between the world’s haves and have-nots. Vast inequalities in economic development, health care systems and — despite the promises of world leaders — vaccine access have made the latest surge much bigger and much deadlier.  “The developed countries used up the resources available because they own the resources and they want to protect their people first,” said Dono Widiatmoko, a senior lecturer in health and social care at the University of Derby and a member of the Indonesian Public Health Association. “It’s natural, but if we look it from a human rights point of view, every life has the same value.”  And as the public health officials keep repeating, and the pandemic keeps proving, as long as one region is afflicted, no part of the world is safe. As the Delta variant wreaked havoc in India this spring, when the pandemic killed more than 200,000 people there — an official count that is widely seen as too low — and paralyzed the economy, it also leapt national borders, infecting climbers on Mount Everest, pro-democracy protesters in Myanmar and travelers to London’s Heathrow Airport. Today, it has been detected in at least 85 countries and is the dominant strain in parts of Europe, Asia and Africa.  The variant’s ferocious transmissibility was on full display in Indonesia, the world’s fourth-most-populous country. In May, infections there were at their lowest point since the country was gripped by the pandemic last year. By late June, Indonesia was suffering record caseloads as the Delta variant took hold after a religious holiday scattered travelers across the archipelago. On Tuesday, the International Federation of Red Cross and Red Crescent warned that the country was “on the edge of catastrophe.”  Fewer than 5% of Indonesians have been fully vaccinated, and frontline medical workers were immunized with Sinovac, the Chinese-made vaccine that may be less effective than other inoculations. At least 20 Indonesian doctors who received both doses of Sinovac have died. But with Western countries hoarding what appear to be more potent vaccines, countries like Indonesia and Mongolia have had no choice but plentiful Chinese-made alternatives.  Last week, the Hong Kong authorities suspended passenger flights from Indonesia, and they are doing the same with travel from Britain starting Thursday. In May, Portugal tried to resuscitate its tourism industry by welcoming back sun seekers from Britain, despite reports of the Delta variant’s spread there. Within a few weeks, the British government had instituted a quarantine for travelers from Portugal, including returning vacationers.  With Delta variant cases sharply increasing, Lisbon went into weekend lockdown, and Germany deemed Portugal a “virus variant zone.” Now Portugal has backed away from its tourist welcome and is requiring unvaccinated British travelers to quarantine. Some Portuguese hoteliers are despondent. Isabel Pereira, a guesthouse owner, said half of her bookings have been canceled, and she understands the tourists’ concerns. “I cannot unfortunately even tell them for sure what to expect tomorrow, let alone next week,” she said.  For others, the past is repeating itself with turbocharged velocity.  In Bangladesh, scientists found that nearly 70% of coronavirus samples from the capital, Dhaka, taken between May 25 and June 7 were the Delta variant. Coronavirus test positivity rates this week have hovered around 25%, compared to 2% in the United States. On Wednesday, Bangladesh recorded its highest-ever daily case count. The numbers look set to climb higher as migrant workers return to their villages ahead of a July 1 nationwide lockdown, potentially exposing those communities to the virus.  The nationwide shutdown means that all domestic public transportation networks will be suspended and all shops closed for at least a week. But with Bangladesh’s export-driven economy battered by the pandemic, the government has refrained from idling garment factories and mills. “They are hardworking people,” said Mohammed Nasir, the former vice president of the Bangladesh Garment Manufacturers and Exporters Association. “Their immune systems are stronger.”  If pandemic history is any precedent, such crowded quarters, just like prisons or mass religious gatherings, can turn into petri dishes of infection. Many garment workers, though, are desperate to keep their jobs, especially with annual bonuses due soon.  Despite promises from various countries and international organizations, vaccine deliveries to Bangladesh have been underwhelming. Fewer than 3% of Bangladeshis have been fully vaccinated.  “We are working to make a balance,” Nasir said, “between lives and livelihoods.”