In April, Didi was one of nearly three dozen Chinese internet companies that were hauled before regulators and ordered to ensure their compliance with anti-monopoly rules and to "put the nation's interests first"

By Kate Conger and Raymond Zhong 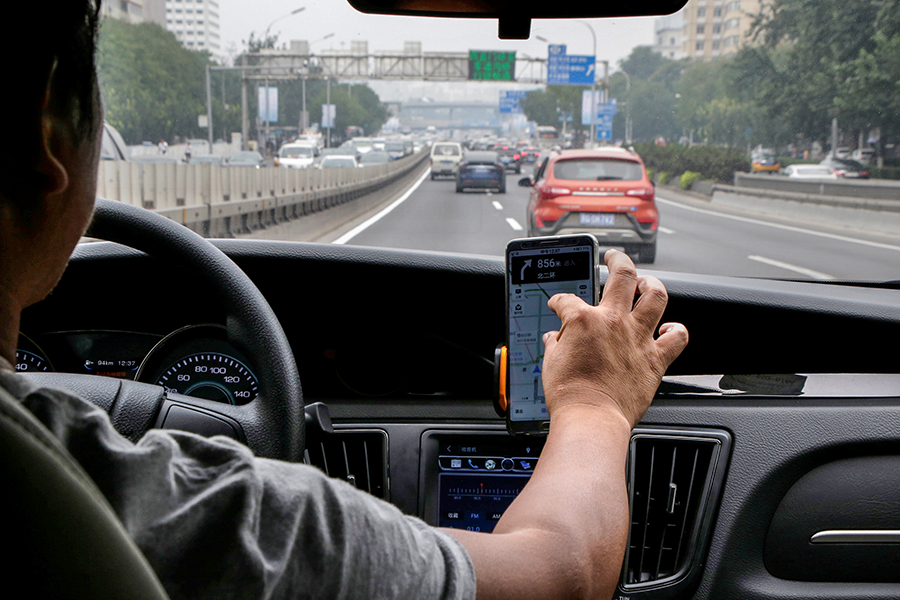 A Didi Chuxing driver rides his electric car on the way for service in Beijing, China. Image: Reuters/Jason Lee

Didi, the leading Chinese ride-hailing platform, made its Wall Street debut Wednesday, capping a year in which ride-booking and travel companies have struggled amid intermittent pandemic lockdowns. Didi began trading at $16.82 a share on the New York Stock Exchange, up 20% from a $14-a-share offering price. But investor interest cooled throughout the day, and Didi closed at $14.20, pegging the company’s value at more than $69 billion. The company made its debut, trading under the ticker DIDI, as Wall Street continues to embrace fast-growing tech companies regardless of their ability to turn a profit. Ride-hailing companies like Uber and Lyft, in particular, have proved to be profligate money losers, often burning through billions in cash each year.  Didi is no exception. It lost $1.6 billion last year, although it reported a profit of $30 million in the first quarter of this year. Revenues declined 8% to $21.63 billion last year because of the pandemic, the company said in a regulatory filing.

Despite its dominance in China and other countries, Didi could face unusual scrutiny from investors because of continued tensions between the United States and China. The U.S. government has placed some Chinese tech companies on lists that restrict their ability to do business with the United States or its trade partners.  “Didi, for good and bad, is in the center of the U.S.-China cold tech war,” said Daniel Ives, managing director of equity research at Wedbush Securities. “It’s a successful IPO coming out of the gates,” he said, but the company still has a lot to prove to investors worried about tension between the countries.  Investors could also be wary of regulators in Didi’s home country. China’s antitrust authorities have begun to aggressively scrutinize the country’s big internet companies. Last year, Chinese regulators began cracking down on what they called unfair and anti-competitive business practices in the internet industry.  “China’s regulators already have them in their cross hairs,” said David Trainer, CEO of New Constructs, an investment research firm.  A taxi industry group wrote the country’s antitrust watchdog in December, urging the agency to take a second look at Didi’s purchase of Uber’s business in China in 2016. It had already investigated the sale on antitrust grounds without any action taken. The letter accused Didi of using unfair subsidies to retain passengers and of giving ride orders to unlicensed drivers and vehicles.  In April, Didi was one of nearly three dozen Chinese internet companies that were hauled before regulators and ordered to ensure their compliance with anti-monopoly rules and to “put the nation’s interests first.”  Didi promptly issued a statement, which the antitrust regulator published on its website, vowing to “promote the development and prosperity of socialist culture and science” and to strictly obey the law. The regulatory pressure raised questions about whether Didi would be permitted to grow large enough to be consistently profitable, Trainer said.  Both Didi and Uber have made Latin America a focus for their global expansion. But the region continues to experience rising coronavirus caseloads, potentially throwing a wrench into growth plans.  “How are they going to do in places like Africa, the Middle East, or South America? Will you be hailing a Didi or an Uber?” said Drew Bernstein, co-chairman of Marcum BP, an audit and advisory firm focused on Asia. Didi Dache was founded in Beijing in 2012 and merged with a Chinese rival, Kuaidi Dache, in 2015 to form Didi Chuxing. In China, Didi’s ascent has mirrored that of other tech powerhouses including ByteDance, TikTok’s parent, and food-delivery giant Meituan.  Although Uber tried to compete in the Chinese market, it eventually sold its Chinese operations to Didi in exchange for a stake in the company. Now that Didi is public, Uber’s stake is worth about $8 billion.  Two separate incidents in 2018 in which Didi drivers raped and killed female passengers spurred the company to make changes to its service but did not severely mar its appeal to users. Still, even as scores of companies large and small have entered the ride-booking business in China, Didi has remained a leader.  Although Didi is dominant in China and operates in 14 other countries, including Australia, Brazil, Mexico and Russia, its valuation is notably smaller than Uber’s $94 billion. But unlike Uber in its trading debut two years ago, Didi was able to remain above its IPO price during its first day of trading. Didi dwarfs Lyft, the second largest ride-hailing company in the United States, which is valued at nearly $20 billion.  Didi said that it had the ability to grow further as it expands its business to new international markets. “We aspire to become a truly global technology company,” Didi’s founders, Cheng Wei and Jean Liu, wrote in a letter included with its regulatory filing.  Didi was valued at $56 billion in 2017, and its investors include SoftBank of Japan; Mubadala, an Abu Dhabi state fund; Alibaba and Tencent, China’s two main internet giants; and Apple, which invested $1 billion in 2016 to show its support for the Chinese market. A number of Chinese businesses have sold shares on U.S. exchanges in recent months, including ones in industries, such as electric vehicles, that have been snared in trade tensions between Washington and Beijing. Chinese electric carmaker Nio raised $2.6 billion in a December offering on the New York Stock Exchange.  Before leaving office this year, former President Donald Trump barred Americans from investing in companies identified as having links to China’s military. But his administration did not move forward with efforts to curb access to U.S. capital markets for a wider range of Chinese companies.

Tweets by @forbesindia
Pandemic surges again in many parts of the world, fuelled by variants
The irony of being Adam Wyden: When you're a top hedge fund manager but your father is a tax-the-rich champion