Pooja Kumari enrolled herself in the UberMedic programme to fill in for the few ambulance services available to cancer and dialysis patients during the lockdown, a job that involves driving about 200 km every day 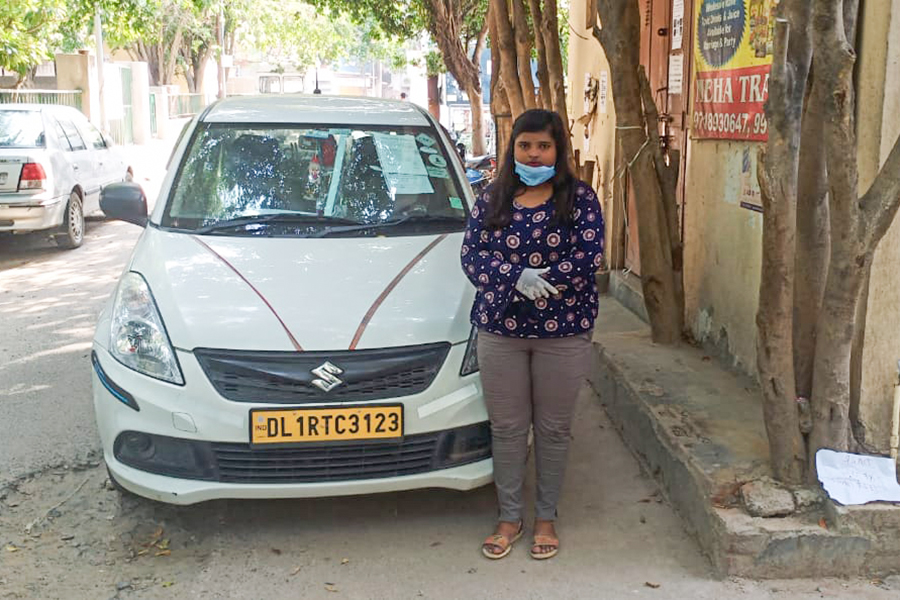 Pooja Kumari has been an Uber driver for two years, and eight months ago, bought herself a Maruti Suzuki Swift Dzire


Today is an easy day for Pooja Kumari. But just yesterday, the 24-year-old drove 170 kilometres ferrying ailing cancer and dialysis patients from their homes to their respective hospitals, across New Delhi and Ghaziabad. Kumari is a driver for ride hailing app Uber’s UberMedic programme, which is dedicated to transporting frontline healthcare workers and critical patients during the pandemic. UberMedic was launched across 10 Indian cities on April 15, including New Delhi, Mumbai, Noida, Pune and Bengaluru, among others. Kumari, who has been an Uber taxi driver for the past two years decided that she wants to be part of the initiative.

According to Uber, currently, more than 18 Indian hospitals are using the service. Based on an agreement with the National Health Authority (NHA), Uber is making its Medic cars available to many of these public sector hospitals free of cost. “In the early days of the lockdown, I was scared to drive passengers around for fear of the coronavirus,” Kumari says. “But Uber has provided me with a safety kit and step-by-step instructions, which helped me decide to go back to driving. I’ve been doing it for two months now.” Kumari takes Sundays off, and spends them with her older sister and her family, with whom she is currently staying. In the evenings, Kumari’s seniors allot her duty for the next day, which include details of carrying cancer patients for chemotherapy and radiation, or nephro patients for dialysis; some of these treatments take hours to finish. “I always disinfect the car before and after every patient ride. After I drop them to the hospital, I usually drive around while I wait for them to finish their treatment, until they call me to pick them back up. I never get out of my car,” says Kumari. Women taxi drivers are gradually increasing in number across the country; after working as a driver for a long time, Kumar bought herself her own Maruti Suzuki Swift Dzire, which she drives around the city. “I learned how to drive in Faridabad, along with a friend. Then I went on to work multiple jobs, including one at a Maruti factory. I decided to drive an Uber because of its flexible timings,” she recounts. A normal workday involves driving 150-200 kilometres. “While it can be hectic, it is important to serve these patients, because they are critical. It is not about earning money right now—currently, there are very few ambulance services functioning for them. We should not forget those who are suffering in pain because of deadly diseases like cancer,” Kumari explains. She maintains that social distancing norms are strictly followed while driving, as Uber allows only two passengers per ride. They have put in a contraption in the car that does not allow air to pass between the front and back seats. “My sister keeps a bucket of warm water out for me, and as soon as I return home, I wash my clothes and take a bath, before meeting the family for tea,” Kumari says. This is part of a daily series on how Covid-19 has upended the lives of essential workers across the country. Read more here
Pooja Kumari has been an Uber driver for two years, and eight months ago, bought herself a Maruti Suzuki Swift Dzire

Tweets by @forbes_india
It's time to end racism in the fashion industry. But how?
The man getting America back on track