Temasek, a global investment firm owned by the Singapore government, has deployed US$11 billion in India in 15 years, moving from the emerging markets theme to internet-enabled companies. Health care and warehousing are also on the cards 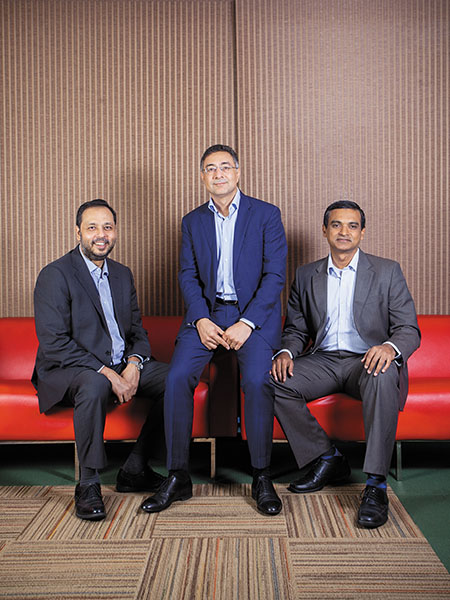 What do China’s Didi Chuxing, Indonesia’s Gojek, Singapore’s Grab and India’s Ola have in common, apart from being ride-hailing companies? Answer: A common investor from Singapore called Temasek.

The global investment company owned by the government of Singapore—it functions independently, though—has been deploying capital in India for 15 years now. The investor with a global portfolio worth S$313 billion (till March 31) has pumped nearly US$11 billion into India through direct and indirect investments since 2004 (one S$ equates to 0.73 US$ and roughly ₹51). It has been one of the most active global funds in the country and has tapped almost every sector. It has invested US$1 billion every year for the last five years in India and has a 5 percent exposure to the country; its largest exposures are to its home country and China (26 percent each) followed by North America (15 percent) and Europe (10 percent).

Although Temasek has been at the forefront of some blockbuster private equity deals—think Manipal Hospital Enterprises and Schneider Electric India—the focus has increasingly shifted to technology transactions. These include companies in different parts of the tech value  chain, including consumer internet, offline-online models, artificial intelligence, augmented reality, virtual augmented reality and computer vision. In the past four years, Temasek has infused roughly S$400 million in new-age Indian companies like Ola, Policy Bazaar, Zomato, Manthan, PineLabs, UST Holdings and CarTrade.

“This is an ongoing journey for us,” says Ravi Lambah, head of India at Temasek, who oversees the TMT (technology, media, telecom) investments for the firm. “In the last five years or so, we’ve started seeing some pretty interesting technology startups in India... the startup ecosystem is quite vibrant.”

The game plan is to create a portfolio of early-stage companies, making investments in the S$20 million to S$50 million range. The ones that start proving the thesis will get more funding in follow-up rounds. For instance, in 2016, Temasek led a ₹950 crore financing round in online auto classifieds company CarTrade alongside venture investment firm March Capital, with participation from existing investor Warburg Pincus in January 2016. Separately in a fresh round of funding, Temasek along with a US-based family office, led another ₹366 crore capital infusion in the Indian company. Even in the case of financial tech platform Policy Bazaar, where it first invested in 2015, it formed a joint venture with Info Edge to co-invest US$27.7 million in 2018 for an undisclosed stake.

“We can fund them for the next few rounds and then we get the effect of combined equity returns,” explains Lambah. “We’re looking at putting more capital in the private domain, globally and in India, and on the startup side, we will continue to focus quite heavily.”

What about the cash burn that these companies undertake to achieve scale and size, and the huge losses most are saddled with? Lambah reckons cash burn is almost a necessity and is similar to any traditional company that is spending capital for marketing. Profitability, though, has to be the end game. “For us, unit economics and the path to being profitable are important,” he says.

Promeet Ghosh, deputy head in India for Temasek, explains how Temasek’s role as an investor has been changing, as it garners domain knowledge in a clutch of sectors. “Building something ground-up as a greenfield project is different from deploying capital as a minority shareholder,” he points out. “And for that it is important to create deep domain knowledge before chasing any deal, sometimes for years maybe.” For instance, it was only in 2018 that Temasek invested US$400 million in National Investment and Infrastructure Fund.

Temasek is also keen to make health care a key part of its India game plan. This perhaps stems from the 100 percent-owned health care platform it created in Singapore two years back called Sheares. And in India it is something it is looking to build, along with China. “The idea is to create the next wave of digital health care and look at how we can change health care in emerging markets,” says Lambah. Investing in multi-specialty hospital chains may be one prong of this strategy, where it can be a majority shareholder. That will, adds Lambah, open up possibilities for acquisitions and buying smaller chains to integrate backward.

Temasek’s idea is to have an operating team on the ground, the way it has done in Singapore where it has hired senior health care resources with global expertise to overlook the platform.

What Lambah keeps asserting is that Temasek is not looking to just create a hospital with beds, but at getting technology into health care, providing access to remote medicine and bringing in efficiencies which will enable affordable health care in India.

“It is not about putting more capex but being more efficient in the way health care is done,” says Venkatesh R, managing director and head of health care for Temasek in India.

Clearly, Temasek has come a long way in India since 2004, when it was then betting on the emerging economy and urbanisation themes. At that time, it looked at banks and telecom as a proxy for economic growth, which manifested itself in investments in ICICI Bank, HDFC Ltd, Axis Bank and Tata Sky. Adani Ports, GMR Energy, and life sciences companies like Syngene International, Glenmark Pharmaceuticals also entered its portfolio.

Says Ghosh, “As exposure to India has grown, our investment thesis has also evolved in these sectors. Like we started with banks and telecoms, and we still have a number of types of banks that we have invested in.” In the past five years, Temasek has backed financial services firms like AU Small Finance Bank, Fullerton India Credit Company—the non-banking finance company it operates in India. It even acquired the first venture debt fund in India called SVB India Finance for ₹300 crore and rebranded it as InnoVenCapital.

Significantly, Temasek entered India along with the United Kingdom, and before it started investing in Beijing and other Asian economies. Since then, though, China has raced ahead of India, accounting for a little over a quarter of Temasek’s portfolio (as of March 2019). Lambah insists that Temasek does not allocate funds by sector or geography. “We never allocate capital by saying x billion in China or any other country. We are bottom up-driven and are looking for the best opportunity (anywhere) for our firm.”

But Lambah believes that the bigger theme in India has always been about domestic consumption and it remains the same; the firm spends most of its time deploying capital in consumption-based stories.

For instance, one of its earliest investments in the country was in Tata Sky in 2007, when it picked up a 10 percent stake. The cumulative investment in the company so far has been nearly ₹450 crore. After 12 years, Temasek hasn’t sold a single share in the direct-to-home operator.

Yet, a long-term focus does not always mean staying invested for a long period. For example, Temasek exited Max India in 2017 after holding its investment for six years and nearly doubling it. It had invested ₹120 crore in 2010 and sold its stake gradually since 2015. Yet, most of its investments are long-gestation in nature with investee companies going through various cycles. One example is Axis Bank where it first invested in 2012 and has held on to it through thick and thin for seven years. “Because we have permanent capital on the balance sheet, we have the ability to be flexible and that differentiates us globally and not only in India,” says Lambah.

Even though Temasek works independently, it is one of the first foreign government-owned investment company which started deploying capital. India now counts a lot of investments from sovereign wealth funds, including the likes of Canada, Norway, Dutch and other economies, but Temasek preceded them.
The fund has also built relationships with large family-owned businesses. Its management, for instance, knows the Godrej family for a long time, although it didn’t transact with them. It was only in 2012, when Godrej Consumer Products Ltd was looking for funds that Temasek stepped in to invest S$177 million (₹685 crore) to acquire a 5 percent stake in the company. Temasek subsequently invested in the group’s agri business, Godrej Agrovet, which went on to list on the stock market.

Temasek sees scope to explore synergies with investments made elsewhere, particularly in its home country. For instance, it has a S$300 million warehousing platform with Capitaland, one of Asia’s largest real estate groups, again owned by the government of Singapore. It formed the partnership last year and it is building 4.3 million sq ft of assets across the country. Says Ghosh: “It is going to build a national network of warehouses. This is an area that we thought would be interesting in the GST era.”