'They don't want to die here': Inside a migrant labour helpline during Covid-19

Part of a team of 15, Bahadur Singh Ahirwal's helpline would get 700-900 calls a day at the peak of lockdown, from people who had been hungry for days, separated from their families, looking for a way home. A 'matter of life and death', they decided no call would go unattended 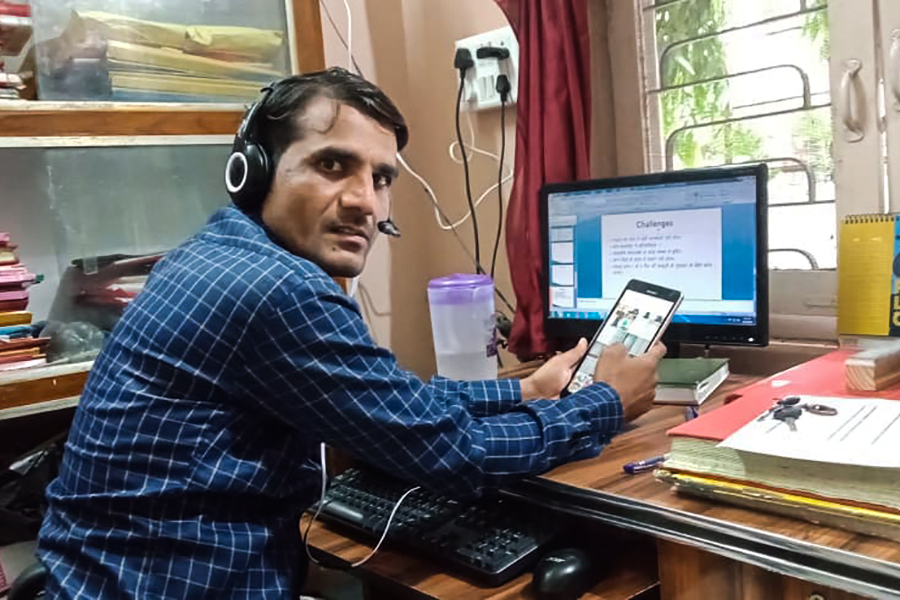 Image: Bahadur Singh Ahirwal says that with cases in such dire need, the job took an emotional toll on the team

Until March 22, Bahadur Singh Ahirwal had been dealing with calls from labourers seeking help with violence, bonded labour and non-payment of dues. One of a team of 15 labour helpline coordinators with Jan Sahas, an NGO that works to protect the rights of socially excluded communities, Ahirwal saw the tone of the calls changing as soon as the Covid-19 situation emerged. In the last week of March, the regular calls tapered off, replaced by pleas for ration and money for food. “We got nearly 500-600 calls in the last week of March, and we promptly got in touch with our director and team to figure out what the response was going to be, so we could answer the queries,” says Ahirwal, 34, who is based out of Dewas in Madhya Pradesh. On average, he gets 15-25 calls daily, but the number rose to 70-80 calls a day in April—with about 25-30 calls seeking ration help, while others pertained to asking for information on helplines and the schemes migrants could access. The calls were desperate and came non-stop. The team realised this was not a regular occurrence, it was an emergency that could not be put off to another day. With 700-900 calls a day on their toll-free number, the team got together on a call and decided they would ensure no call went unattended, whether it was day or night.

People called the helpline saying they and their kids had been hungry for days, or they were separated from their family and there was no one to look after them. It was, he says, a matter of life and death. “We knew this was not something that would occur again, we would not get this sort of opportunity to help again, and that we needed to do all that we could. We were emotional thinking what if we had been in their place… So we set up a roster for the night hours so that we didn’t miss any calls,” Ahirwal says. Initially, there was no way to get food to the workers, so they transferred money with the help of the finance team. The protocol was to take down details of each case, interact with the labourers and migrant workers who called them, answer their questions and verify their details, and pass them on to their team so that timely help was given to those in need. Once the workers had rations, the tenor of the calls changed to seeking help to go home. “They started calling and saying they didn’t want to die here,” recalls Ahirwal. The support too changed to giving information on how to get an e-pass and organising transport. Since the end of May, the calls have reduced to 100-200 a day. But until then, Ahirwal found it hard to get up from his desk, or to put down his diary and phone, which created tension within the family. “My wife said the children need clothes or new shoes, but I explained that there were people walking home barefoot and needed our help. I knew family tensions could be resolved later,” says Ahirwal who lives with his parents, wife and two children. It also took an emotional toll on the team. Every three months, Jan Sahas holds counselling sessions for the staff, not just training them in how to deal with the calls they get but also to cope with the accompanying trauma. In the middle of the traumatic two months, the team sought a counselling session to help deal with the situation. “There was a case, a woman who worked as a tailor and was seven months pregnant and in pain,” he recalls. Her husband worked in a hotel and had also been laid off and they had one child. They had no money for either food or a doctor and were at a dead-end and at loggerheads with each other when they called. The calls the team attends to are usually to the point, but this one went on for 27 minutes, after which Ahirwal disconnected and made a video call to the couple from his personal phone to counsel them. “I was very worried that they might do something,” he says. He got the team to prioritise the case, which immediately swung into action to organise food and treatment. Six to seven hours later, the couple made a video call to him to thank him. “But it was a traumatic case, and every single detail of that case is etched in my mind.”  This is part of a daily series on how Covid-19 has upended the lives of essential workers across the country. Read more here