A doctor's life in Covid-19, from the hinterlands of Kerala 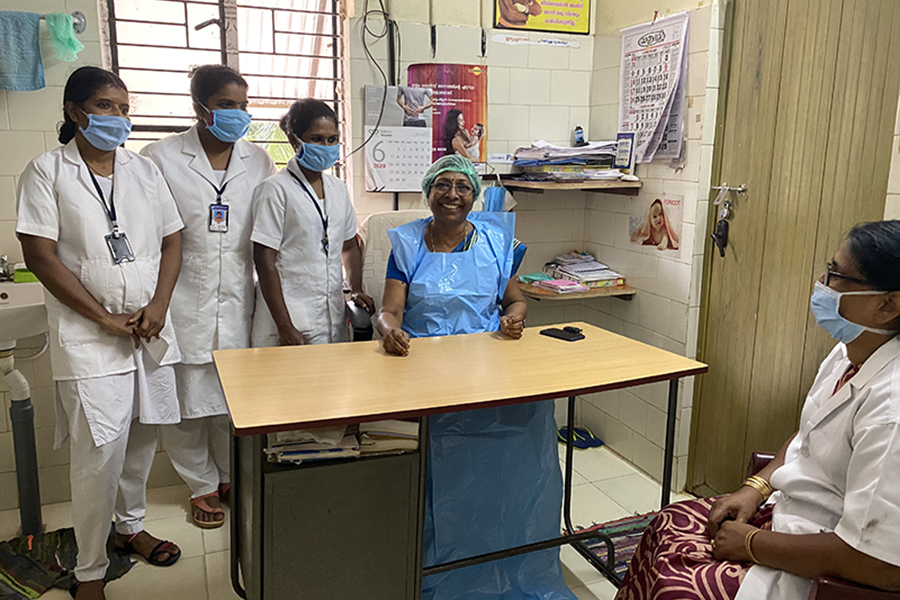 Dr Sreekumari Balachandran sees patients flocking in large numbers, often despite being asked not to during the lockdown.
It’s not easy being a doctor during a pandemic.

If anything, for gynaecologist Dr Sreekumari Balachandran, the past few months have only been busier and more demanding. From patients flocking in large numbers to hospitals despite being asked not to, having to rush to hospital well past midnight for emergencies, or even sitting the entire day with mask and protective gear, it hasn’t been easy. To add to that, at home, she has her husband along with her mother, and mother-in-law, both octogenarians, all in the vulnerable age group to be careful about when she returns home.
“After each patient comes and goes, we spray sanitisers and disinfectants around the room, and on all the furniture,” the 60-year-old says. “In some cases, patients have even jumped quarantine to come, even though we had advised them against it on the phone.”

Over the past few months, patients have lied about their quarantine status or withheld data of their whereabouts until a thorough investigation is initiated. “Recently, a patient had come from Gujarat, but when asked to produce a quarantine certificate, she was unable to. We even contacted the local panchayat, and they were unaware. That led to other patients raising concerns, and there was a hue and cry,” Dr Balachandran says.
While there is thermal scanning at the hospital before a patient enters, it's only recently that quarantine certificates have become mandatory if they have come from outside the state. “Before that, we had to ask numerous questions before we found out the reality,” the doctor says. “In some cases, if the patient has come from a hotspot, they don’t say it immediately. In Kerala, many women come to their maternal homes, and only give the address of their spouse to hide that. All this raises the risk of spread.”
Yet, there are no excuses for work. The doctor drives in most days by 9 am (sometimes earlier) to the RCPM Hospital in Kollam district, where she has worked for nearly 27 years. A typical day includes attending to nearly over 80 outpatient consultations, a number that fell initially during the early days of lockdown, to only increase within weeks.
“The biggest fear when you are a doctor is that if you contract the disease, you could end up being a super spreader, especially since you meet so many people,” Balachandran says.
She also does multiple baby deliveries each day, usually in the range of four to five. “By the end of the day, you start feeling very tired because you are sitting with a mask and you don’t get a chance to remove it and breathe,” she says.
On most days, the doctor is back home by 7 pm, but certain weeks stretch at the hospital through the night, when she barely gets three or four hours of sleep before work begins for the following day. “It’s been a testing time but many others in my profession have been sacrificing and doing the same,” the doctor says. “I just hope people are more careful and exercising adequate precautions. We are also humans, and we risk everything for the welfare of the patients. Yet when something goes wrong, the doctors are the first to be blamed. That needs to stop.”
This is part of a daily series on how Covid-19 has upended the lives of essential workers across the country. Read more here

Tweets by @forbesindia
Hypertension and its effect on Kidneys
How much Chinese money is in Indian startups?