The irony of being Adam Wyden: When you're a top hedge fund manager but your father is a tax-the-rich champion

In the last 10 years, hedge fund investor Adam Wyden made his investors 11 times richer, and made $100 million for himself, by uncovering hidden stock gems. His biggest worry? That his father, Oregon Senator Ron Wyden, will tax his gains to death 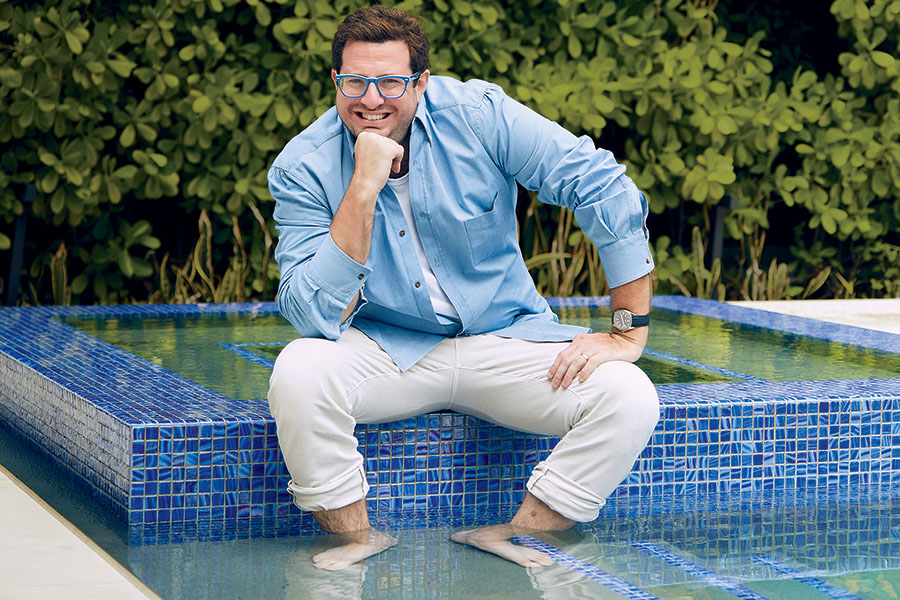 Adam Wyden’s hunt for hidden gems like Ferrari has given him a leg up on the S&P 500. In his Miami garage, however, he prefers Porsches. (He has no interest in the stock of Porsche’s parent, VW. It’s government-backed and made by a unionised workforce.)
Image: Mary Beth Koeth for Forbes

From the sun-drenched house he’s renting in the ritzy Miami enclave of Bay Harbor Island, Adam Wyden is livid at the news crossing his Bloomberg terminal. It’s April 22, and markets are sinking on a report that President Biden aims to raise capital-gains tax rates to 39.6 percent for high earners, effectively doubling the rate for rich investors.

For an answer, Wyden could ask his father, Senator Ron Wyden, a Democrat from Oregon and chairman of the powerful Senate Finance Committee. The elder Wyden is a tax-the-rich champion who dubbed former President Trump’s corporate tax cuts a “partisan tax scam”. His son, by contrast, isn’t registered with either political party but is instead a card-carrying member of the Benjamin Graham party, with a dogged devotion to finding undervalued stocks. And his record to date has been nothing short of staggering.

Over the past decade, the younger Wyden, 37, has grown his bar mitzvah money and personal savings into a $350 million hedge fund in which his share is now worth $100 million. Through his Miami-based ADW Capital Partners, Wyden has proven his mettle as a deep value investor buying companies full of underappreciated assets. He hunts far from the picked-over S&P 500, preferring micro- and small-cap stocks mostly ignored by analysts and large hedge funds. Since inception in January 2011, Wyden’s ADW has returned nearly 28 percent annualised after fees, roughly double the S&P 500, making investors about 11 times their money in a decade.

Wyden is no shrinking violet when it comes to making big bets. His fund is the single largest shareholder in Houston’s RCI Hospitality, operator of over 40 gentlemen’s clubs and parent company of Rick’s Cabaret. Wyden built his 10 percent position beginning in late April 2020, when the coronavirus led investors to believe that in a world of masks and social distancing, a company built on drunken bachelor parties and lap dances was toast. But Wyden reckoned that as the pandemic ebbed there would be pent-up demand for RCI’s clubs, many located in Florida and Texas, and that they would reopen fast. Another plus: It’s exceedingly difficult to obtain a strip club license, meaning the company has a deep moat around its business.

RCI shares have increased fivefold since Wyden invested. Other recent winners include PAR Technology, which sells cash-register software to restaurants, waste-management company GFL Environmental and construction conglomerate API Group, all of which helped his fund to a 119 percent net gain in 2020 and a further 36 percent gain so far in 2021.


Wyden bought a large position in Fiat Chrysler in 2014 after learning investors were getting ownership of its Ferrari subsidiary at virtually no cost. The supercar maker was spun off in 2016 and now trades at a $50 billion market value, many times Fiat’s entire market cap when Wyden first invested. He calls such investments “Russian doll” stocks because inside, they hold valuable hidden assets.

“This is the golden age of active investing,” Wyden says. “Companies worth $1 billion to $10 billion are under-researched and underappreciated.”

Raised in Washington, DC, Wyden caught the investing bug early from his grandmother Nancy, who ran an investment club with members of a local synagogue in Portland, Oregon, where he spent summers. As a teen, to make extra money for investments, Wyden started a car detailing business. He also bought the parts for Tamiya remote-control cars and sold them as finished goods on eBay at a fourfold markup. In 2002, Wyden was admitted to Penn’s Wharton School, and as a junior he interned at hedge fund DE Shaw. But rather than returning for a full-time job at the quant firm after graduation, he became an analyst at a small merchant bank, where he was introduced to value investing. He was especially impressed by the methods of Joel Greenblatt, a legendary value investor and best-selling author who studied spinoffs and hidden assets.

In 2008, as the stock market was crashing, Wyden enrolled at Warren Buffett’s alma mater, Columbia Business School, and began to invest his savings aggressively, looking for “blood in the street” bargain stocks. His focus was on cash-rich, undervalued microcap companies like bottom-tier brokerage firm Rodman and Renshaw, which was trading at between 10 and 30 cents but was profiting by arranging dubious Chinese reverse mergers for hefty fees. The stock went from 10 cents to over $6 in 90 days, and Wyden sold. He then found an even better opportunity in IDT Corporation, a seller of prepaid phone cards and comic books, which was trading at $2 per share but carried $10 a share of cash on its books and another $10 of tax loss carry-forwards. Wyden plowed more than half his growing savings into the company, which ripped higher to $30. 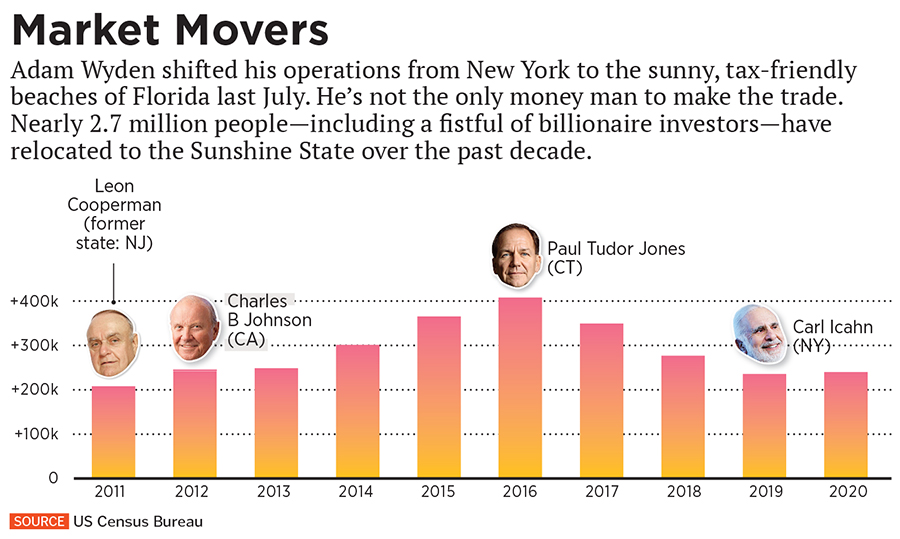 By graduation in May 2010, Wyden’s “stack” was a few million dollars, and in January 2011 he decided to launch ADW, raising over $1 million in its first month, mostly from friends and family. (Senator Wyden isn’t an investor.)

ADW generated a 91 percent net return in its first year and went on to score uninterrupted gains for seven years. Even after fees, the fund’s value soared sixfold. But big bets on small, illiquid companies carry big risks—and in 2018, Wyden faltered.

EVI Industries, a distributor of commercial laundry equipment, which had soared to $47 from $6 in 2016, when Wyden invested, shed nearly half its value. Wyden lashed out, accusing the company of misalignment. When other stocks in his portfolio began to underperform, he turned activist.

He pilloried the management of PAR Technology, which was family-run. “Clearly, the market must be assigning a ‘Sammon family discount’ given the family’s total disregard for minority shareholders,” he groused in a letter to the founders. “[O]ne must wonder if Mr Sammon has spent the last 30+ years writing his PhD dissertation on ‘how to destroy shareholder value.’ ” Wyden won: PAR management was replaced in 2018, and it has gone on to become one of Wyden’s better-performing stocks.

Wyden was even harsher to Atlanta’s Select Interior Concepts, which makes flooring and tiling. “In Yiddish, we call these people gonifs,” he says. “It’s easier to steal value than to create value.”

In 2018, ADW lost 33 percent, and a further 6 percent in 2019 as the market roared higher by 30 percent. Then came the pandemic, which initially slammed his portfolio but ended up the reboot he needed.

Holding 50 percent cash heading into the calamity, Wyden figured that the decade-long bull market would resume, particularly for value stocks and companies tied to the real economy that had missed out on the tech stock–fueled rally.

“The market needed a reset,” he says. “Now we had it, and everybody’s f’ing miserable in their house, and everybody wants to go to strip clubs, go to Vegas and travel and eat in restaurants. . . . I’m really bullish.”

“If I never raise another dollar again, I’m going to become a multibillionaire,” he predicts.

As for tax increases on the rich, Wyden is a realist. “I don’t think I have any sway over my father,” he says. As a hedge, he moved his entire New York–based operation to income tax–free Florida last July, spending $4.1 million for a teardown on Biscayne Bay’s exclusive La Gorce Island. He has flipped the property for a $1.4 million profit and is now in contract to buy a larger, brand-new waterfront mansion.

“We are happy Floridians,” he says, grinning.

Tweets by @forbesindia
Didi, the Chinese ride-hailing giant, makes its debut on Wall Street
After 20 years of bootstrapping, is Bhavin Turakhia switching from value to valuation game?