Most tech unicorns are the product of Silicon Valley's well-oiled VC machine. Not Cloudinary. The maker of marketing software was profitable from day one 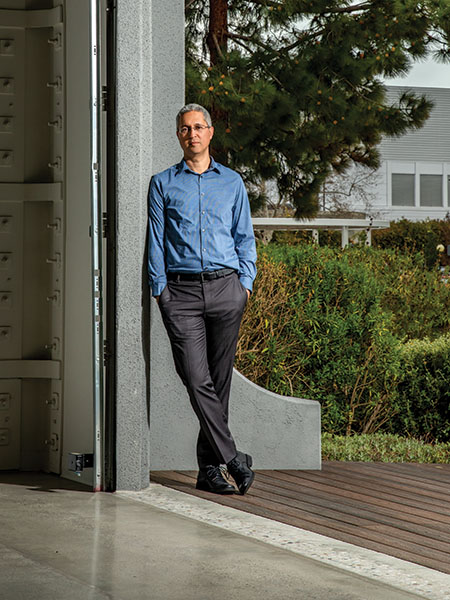 Itai Lahan is adamant that ambitious entrepreneurs should certainly fill their coffers with venture capitalists’ money if they get the chance. “The only consistent way to get to be a billion-dollar company is to go the VC route,” the Cloudinary CEO declares. “That, hands down, will always win.”

In a classic case of “do as I say, not as I do,” though, Lahan has repeatedly turned down venture funding since launching Cloudinary in 2012. Instead, he and his fellow Israeli co-founders, Nadav Soferman and Tal Lev-Ami, have bootstrapped their Santa Clara, California–based startup to near unicorn status. The company makes software that helps the CIOs of almost 7,500 customers, including household names like Nike, Peloton and Neiman Marcus, manage their online marketing content—think videos, logos and product photographs. Revenue grew by some 40 percent last year, to around $70 million, and the company is worth at least $900 million. Cloudinary has appeared on the Forbes Cloud 100 list each of the last three years.

Lahan says the company simply never needed venture money. The founders came up with the idea for the business while running a consulting firm in Israel that built technology for other startups. The clunky software they had to use to manage videos and photos convinced them to create something better. Their consulting clients were Cloudinary’s first customers, which enabled it to turn a profit as soon as it opened its doors. Since then, it has generated enough money—cash flow as measured by Ebitda last year was an estimated $6 million, or about 9 percent of sales—to finance its growth plans every year and to build a 300-person team.

“We were lucky enough early on to grow really fast,” Lahan says. “We were getting money from our customers, and it was more than enough to hit our next-year goals, which were incredibly high.”

Cloudinary’s software automates the drudgery of resizing and reformatting digital content for devices and web browsers, and it ensures that videos and photos load lightning-fast—a must in an era when consumers will click elsewhere upon encountering the slightest delay. Cloudinary also uses artificial intelligence to suggest the best way to present photos and videos to capture people’s attention. The more digital raw material that churns through its algorithms, which currently process between 500 and 2,000 pieces of content a second, the better they get at predicting what will attract eyeballs and clicks.

To get CIOs hooked, Cloudinary offers a free service with strict volume limits. It makes money by charging heavy users. Annual deals can reach high-single-digit millions of dollars. At the end of 2018, it managed 25 billion digital assets; by the end of last year, that figure had vaulted to 50 billion—and should keep growing even if the pandemic-fueled e-commerce boom subsides. In 2020, total US online sales hit $813 billion, a 42 percent year-over-year increase, according to Adobe, which forecasts they’ll pass $1 trillion for the first time in 2022.

Some other notable cloud companies, including project-management software maker Atlassian and Qualtrics, the Utah data analysis company that was ultimately acquired by SAP for $8 billion, bootstrapped themselves to a considerable size before going public. If cloud startups find a core group of fans early on, word-of-mouth marketing can keep costs low, says Jason Lemkin, CEO of SaaStr, a venture firm: “Once you get to a few million of revenue . . . you can be cash-flow positive because your [current] customers will create a stream of future customers for you.”

Few startups are that lucky, which is why Lahan thinks nearly all entrepreneurs should take venture capital. “It’s a numbers game,” he says. “It’s well thought-out. [Venture financing has] tons of pluses, an incredible amount of pluses.”

There are minuses, too. Startups often have to put up with investors on boards directing them along a tight track toward a hoped-for public offering. That’s not something Cloudinary’s founders have had to worry about. (The company doesn’t even have a board.) After the pandemic began, they pulled back on hiring but didn’t fire anyone. They also cut the company’s 2020 revenue target by almost $8 million to take some pressure off staff and help customers in financial distress by postponing payments and offering discounts. Lahan says he’s not sure a board would have supported those moves.

Another key advantage is that the three founders still own just over half of the business. Some of the remaining equity is held by staff; Cloudinary has organised a couple of secondary transactions to let employees sell shares. That has enabled two VC firms, Bessemer Venture Partners and Salesforce Ventures, to get their fingers in the pie, although their collective holding is small.

Still, Lahan might finally be willing to take his own advice. “I’m confident we will need [outside] funding,” he says. “The moment we need it, if an IPO is the right way forward, we’ll do an IPO.” But he hints at other options, including the possibility of tapping late-stage venture funds. If Cloudinary does pursue that route, it will be a case of Lahan taking a lot of money from where his mouth has been.