Being an old-school fundamentals guy in the era of Amazon, Tesla, GameStop and Bitcoin

Growth, momentum and investor psychology are the most important drivers of success on Wall Street today. But at 85, street legend Carl Icahn is one of the last remaining OG corporate raiders who still like asset- and cash-rich companies in need of a shake-up 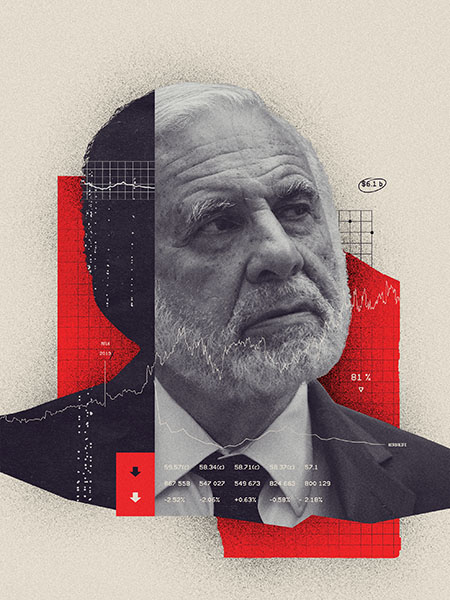 Carl Icahn’s fund has lost money in five of the last seven years. He hopes to turn things around with big bets on Occidental, Bausch Health, Cheniere Energy, Newell Brands and Xerox

In October 2013, when Carl Icahn started selling his large position in Netflix, many believed the vaunted billionaire investor had done it again. The company had successfully transitioned from a DVD-by-mail rental service to video streaming, and Icahn had made a 457 percent return in just 14 months.
“As a hardened veteran of seven bear markets,” Icahn announced, it was time for him “to take some of the chips off the table”. Icahn’s son, Brett, begged his father not to sell. By 2015 Icahn was out, making a tidy $2 billion profit on Netflix. But since his departure, the stock has appreciated another tenfold. Had Icahn held onto it, his profit would have been $19 billion.

Icahn’s Netflix miss isn’t just a fluke. Last year, while the US stock market returned 18 percent during a volatile pandemic bull market, Icahn’s hedge fund plunged by 14 percent. In 2019, it tumbled by 15 percent. In fact, the great trader has lost more than $5 billion trading over the last seven calendar years. His hedge fund has suffered so much that its average annual return since its inception in 2004 has fallen to 3 percent, versus 10 percent for the S&P 500.
Icahn’s struggles illustrate a major shift occurring on Wall Street. In the era of Amazon, Tesla, GameStop and Bitcoin, growth, momentum and investor psychology are the most important drivers of success. But at 85, Icahn is sticking to fundamentals. He is one of the last remaining OG corporate raiders on Wall Street, and he still likes asset- and cash-rich companies in need of a shake-up. “I am a value guy, and the activism model is still the best model if you can find a company with hidden value and the board is not taking advantage of it,” Icahn insists from his new office digs in Florida. “It is still the best on a risk-reward basis, but you need a lot of patience.”
Wall Street still believes. Shares in Icahn’s most important asset, Nasdaq-listed Icahn Enterprises, which invests in Icahn’s hedge fund and holds companies like oil refinery CVR Energy and auto-parts retailer Pep Boys, trade at around $60, up some 20 percent over the last 12 months. The underlying assets, as measured by net asset value, are worth only $14.70 a share. Icahn Enterprises’ net asset value has tumbled from $9.1 billion at the end of 2013 to $3.5 billion. Meanwhile, Icahn has mostly been taking dividends in shares, doubling the share count.
Icahn’s 92 percent stake in Icahn Enterprises amounts to most of his estimated $15.8 billion net worth. Had Forbes used IEP’s net asset value for his net worth instead of its market price, Icahn would be worth $6 billion today. The rest is the Icahn premium. And in the long run it makes total sense: Icahn Enterprises’ stock has returned six times more than the S&P 500 over the last 20 years.
Icahn’s recent trading problems stem from being overweight energy and short the market, including growth stocks. His short positions alone have produced $7 billion of losses in five years. “I got too concentrated in some of the energy stocks—they were dirt-cheap and management was not good, and I just kept piling in,” Icahn says in the unmistakable accent of someone born in Brooklyn and raised in a working-class Queens neighborhood. “The bottom fell out of the energy market. You grit your teeth and you come out of it.” Icahn also insists the net asset value of Icahn Enterprises understates the intrinsic value of his company’s assets. Take Icahn Automotive Group. Icahn is quick to point to the current takeover talk surrounding Mavis Tire Express Service, which is in a similar business and has a similar number of stores. Mavis is being priced at $6 billion, nearly four times the value Icahn Automotive is listed for on Icahn Enterprises’ balance sheet.
Even big energy bets like Occidental Petroleum are beginning to look more promising as the price of US crude has risen from effectively less than zero during the pandemic to $60 a barrel recently. In February, Icahn took a major stake (and two board seats) in Ohio’s First­Energy, a utility whose performance tumbled after one of its subsidiaries became embroiled in a federal racketeering case. Icahn wants it to settle quickly. Another new buy for Icahn is Canadian medical device and pharmaceutical company Bausch Health, which owns eye care and contact lens giant Bausch & Lomb. Bausch has been in the midst of a turnaround since 2013, when it went by the name Valeant Pharmaceuticals. Icahn wants to split the company in two. “In positions like Bausch Health and FirstEnergy, we are on the board and can help make a difference,” he says.
Icahn is spooked by America’s massive federal spending but thinks there are still opportunities in this market. “We are in uncharted waters and will pay a price for huge deficits and lose money in the future,” he says, “but that time is not here yet—and while I am somewhat hedged, I am fairly bullish.”