Dean Solon built a multibillion-dollar fortune in solar energy by manufacturing gear that can be made cheaply in China. His secret: Higher prices for higher quality 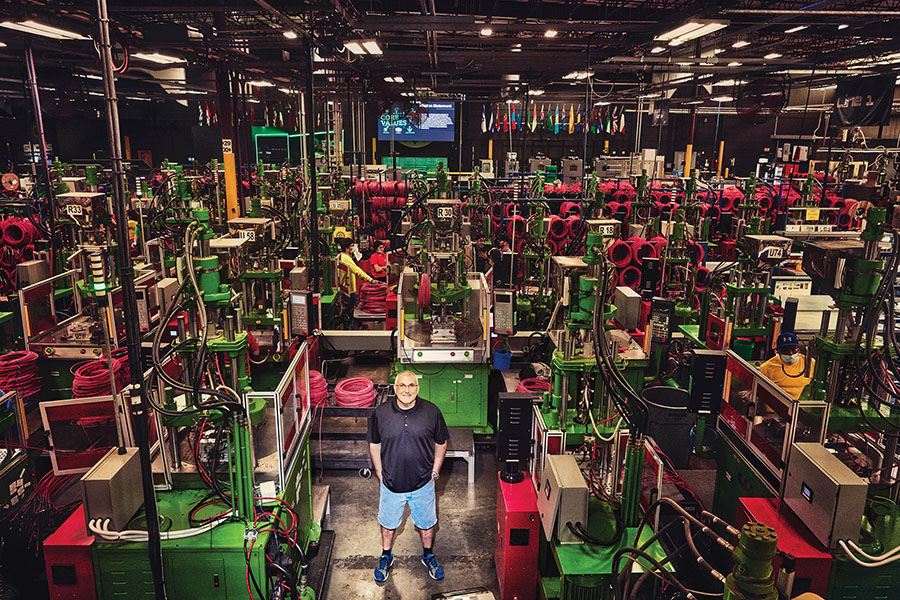 Dean Solon, founder of Shoals Technologies, designed this Portland, Tennessee, factory, where each day 500 of his employees make enough cable to rig “megawatts upon megawatts” of solar power

Image: Jamel Toppin for Forbes At Shoals Technologies’ 100,000-square foot factory in Portland, Tennessee, Dean Solon’s quest for simplicity starts with the colour-coded shirts, inspired by Sesame Street, that his workers wear. “The SunPower logo was yellow, so that’s Big Bird. First Solar was red, for Elmo,” he says. Those working on an order for Blattner Energy, a big solar contractor, sport Cookie Monster blue. “And then we have the Count, in purple. He’s always counting. Those are the quality control people.Shoals’ nonunionised workers at four factories in Tennessee and Alabama make the guts for big solar installations—basically, everything you need other than those shiny photovoltaic panels and the inverters necessary to feed power onto the grid. They craft cable assemblies, combiner boxes, external fuses. It’s exactly the sort of unsexy manufacturing that nearly everyone thinks fled to China years ago.
Indeed, most of Solon’s competitors are Chinese companies like GCL System Integration and Wuxi Sun King. The Chinese-made components are cheaper than Shoals’, but Solon has an edge: His stuff is seen as safer, more reliable and easier to install. That means companies are willing to pay 5 to 10 percent more for it, believing they’ll make up for it in lower labour and maintenance costs. Last year, that premium added up to earnings of $34 million on $176 million in sales. After a January IPO, the 57-year-old Solon is worth some $2.2 billion, thanks to his 40 percent stake in the company and after-tax proceeds from prior equity sales.
To keep that made-in-America premium as low as possible, Solon makes the manufacturing process as foolproof as he can. Screens mounted on the front of each machine show workers how to do each task—from stripping and crimping wires to installing fuses and finishing cable assemblies—with cycle times measured not in man-hours but man-seconds. It’s a “Pavlov’s dog” world, Solon says, in which workers are trained to self-correct when a light atop their station starts blinking, indicating they’ve slipped behind schedule and have about 15 minutes to sort it out before the blinking gets faster and “maintenance” is summoned. They’re told never to worry about messing up. “If this process makes something wrong, shame on us—we designed it wrong, we didn’t bulletproof enough for you not to make mistakes,” he says.
Plant managers sit above the factory floor on a mezzanine platform Solon calls Pride Rock, after the prominent slab in The Lion King. They rarely get involved; teams help one another sort out problems, because if one person slows down for too long, the next in line runs out of parts. “Don’t yell at anyone; let them have a self-win,” Solon says. “I don’t need to squeeze another 10 seconds out of them. If the green light is on, we’re making money.”
Solon has taken his family to Disney World twice a year for decades and has long been inspired by the park’s orchestrated perfection. “On the surface everything is calm and happy and serene, but underneath there’s hundreds of people making sure the magic is right.” On a recent trip to Orlando, however, he’s headed not to Disney but to a nearby solar field owned by Origis Energy. On sunny days, this 270-acre installation generates 60 MW—enough to provide around a quarter of the Magic Kingdom’s power needs. Michael Eyman, managing director of Origis Services, says Shoals products “are not always the cheapest, but always the best”. Origis tried installing competitors’ gear, “and without exception they all failed in their warranty period”.
Shoals’ “plug-and-play” hardware eliminates the need for a crew of expensive electricians out in the field stripping wires and crimping millions of connections by hand. “We don’t turn our customers’ fields into our proving grounds,” Solon says, showing off a wall of five testing chambers, fridge-size boxes where he can subject prototypes to 40 days and nights of heat, cold and 100 percent relative humidity.
Solon is the named inventor on 30 granted and pending patents. He owns at least that many pairs of jean shorts, his preferred uniform, along with a black Shoals collared T-shirt.
He prides himself on being so uninterested in bean counting and SEC filings that 15 months ago he handed the CEO reins to longtime chief technical officer Jason Whitaker.
Solon remains on the board of directors, focusing on new products. Shoals’ chairman, Brad Forth, is also a senior advisor to Oaktree Capital, which bought more than half the company from Solon in 2017 and cashed out $2 billion in the recent IPO. Now that it’s public, is there any impetus to squeeze out a few more margin points by loosening some of Solon’s obsessions? “We are never going to sacrifice quality or reliability for anything,” says Whitaker, 41, “because it’s built into the process itself.” 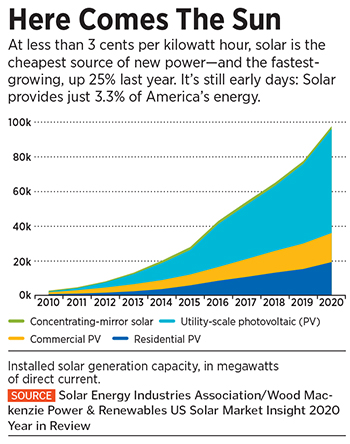 Solon got his start at age 8 carrying a toolbox for his dad, who did air conditioning and refrigeration repair and taught at the vocational school in Gary, Indiana. Young Dean took apart everything to see how it worked and put it back together, from lawnmowers to V8 engines, sometimes with a few pieces left over. By 16, he had his own clients and his own truck. He studied engineering at Purdue but dropped out. He quit an internship at Inland Steel when it refused to give him credit for innovations he had developed. By the late 1980s he was engineering and selling automotive parts for a joint venture between General Electric and Bosch. He made a point of cutting his commission in order to keep customers coming back for more—then quit when his bosses resented that he was still making more money than they were.
In 2003 he got a call from First Solar, which needed some wiring and junction boxes to connect solar panels. Soon Cypress Semiconductor wanted the same gear for its SunPower solar spin-off. “I’d been a gearhead my whole life—I thought I would retire making car parts.” Instead, he introduced manufacturing perfectionism to the “PhD thinkers and basement tinkerers” of solar, who had no idea how to efficiently scale up their output. “All I knew was scale.”
The solar revolution is still in its early days. In 2020, US solar power generation grew 25 percent to 130 GW hours, but renewables, excluding hydroelectric, still account for only 12.5 percent of total domestic energy supply. Beyond higher quality, there’s another window of opportunity through which native players can shine: In late 2019, China’s Huawei shuttered its US solar business after Congress made public its concerns that Huawei’s equipment could serve as vectors for cyberattack.
For someone so process-driven, it’s refreshing that Solon remains dedicated to the human element of his business. Animatronics might be fun at the theme park, but not in Shoals’ factories. “It’s cool that a robot can work 24/7, but the robot doesn’t go home to a family and have to feed it at the end of the evening,” Solon says. “I could install automation and do this completely robotically, this whole factory. But then I’m just a jerk.”