As virus cases rise in Europe, an economic toll returns

Europe's already fragile economic recovery is at risk of being undermined by a fourth wave of coronavirus infections as governments impose increasingly stringent health restrictions that could reduce foot traffic in shopping centres, discourage travel and thin crowds in restaurants, bars and ski resorts

By Patricia Cohen and Melissa Eddy 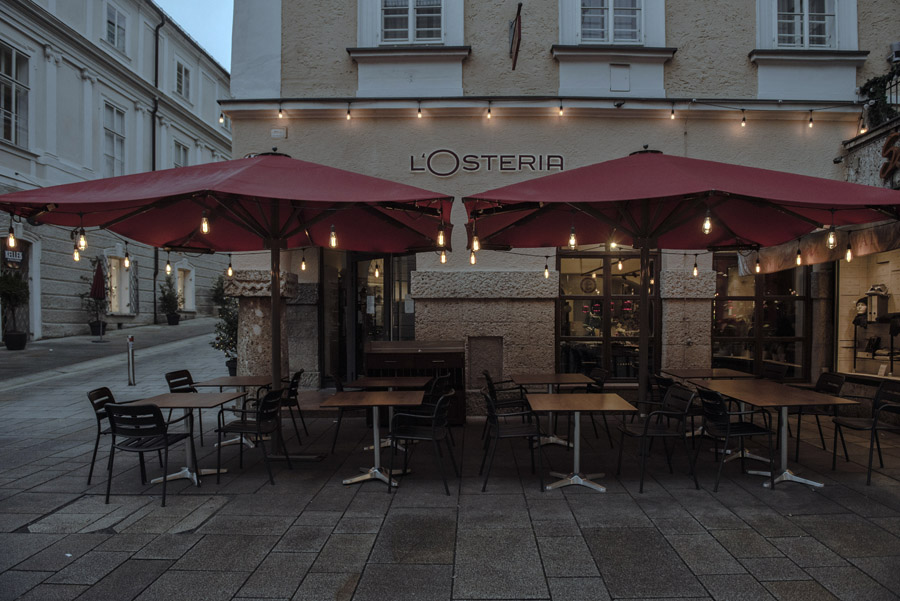 A restaurant in Salzburg, Austria, on Monday, Nov. 22, 2021. Due to strict health restrictions, restaurants in Austria will allow only carryout service. (Laetitia Vancon/The New York Times)

Europe’s already fragile economic recovery is at risk of being undermined by a fourth wave of coronavirus infections now dousing the continent, as governments impose increasingly stringent health restrictions that could reduce foot traffic in shopping centers, discourage travel and thin crowds in restaurants, bars and ski resorts.

Austria has imposed the strictest measures, mandating vaccinations and imposing a nationwide lockdown that began on Monday. But economic activity will also be dampened by other safety measures — from vaccine passports in France and Switzerland to a requirement to work from home four days a week in Belgium.

“We are expecting a bumpy winter season,” said Stefan Kooths, a research director of the Kiel Institute for the World Economy in Germany. “The pandemic now seems to be affecting the economy more negatively than we originally thought.”

The tough lockdowns that swept Europe during the early months of the pandemic last year ended up shrinking economic output by nearly 15%. Buoyed by a raft of government support to businesses and the unemployed, most of those countries managed to scramble back and recoup their losses after vaccines were introduced, infection rates tumbled and restrictions eased.

In September, economists optimistically declared that Europe had reached a turning point. In recent weeks, the main threats to the economy seemed to stem from a post-lockdown exuberance that was causing supply-chain bottlenecks, energy-price increases and inflation worries. And widespread vaccinations were expected to defang the pandemic’s bite so that people could continue to freely gather to shop, dine out and travel.

What was not expected was a series of tough government restrictions. A highly contagious strain — aided by some resistance to vaccines and flagging support for other anti-infection measures like masks — has enabled the coronavirus to make a comeback in some regions.

“The lower vaccination rates are, the gloomier the economic outlook is for this winter term,” Kooths said.

Roughly two-thirds of Europe’s population has been vaccinated, but rates vary widely from country to country. Only a quarter of the population in Bulgaria has received a shot, for example, compared with 81% in Portugal, according to the European Center for Disease Prevention and Control.

Before they were ordered shut, stores in Austria were already suffering a 25% loss in revenue for November compared with the same period in 2019, the country’s retail trade association said Monday. Although the last shopping Saturday before the lockdown — stores in Austria are closed Sunday — was stronger than that day two years ago, the group said, it would not be enough to make up for the losses expected in the coming weeks.

Hotels were not faring much better in the week before the start of the lockdown, with 1 of every 2 bookings canceled, Austria’s hotel association, ÖHV, said.

Still, the overall outlook is not nearly as dire as it was last year. Although several analysts have shaved their forecasts for October, November and December, growth is still expected to be positive, with the yearly increase hovering around the 5% mark. Jobless rates have dropped and, in some areas, businesses are complaining of labor shortages.

Austria’s response, to impose a three-week lockdown — which shuts all stores except those providing basic necessities, allows restaurants to serve only carryout and requires people to stay home except for essential activities — is not necessarily a bellwether of what other governments across Europe will do. Leaders in France and Britain signaled last week that they were not planning new shutdowns.

“We’re not at that point,” Sajid Javid, the British health secretary, said Sunday. While there cannot be complacency, he added that he hoped people could “look forward to Christmas together.”

Claus Vistesen, chief eurozone economist at Pantheon Economics, said that while it was clear that restrictions and lockdowns had a significant and immediate impact on the economy, limited and intermittent closings — like those that already exist in some countries — were less likely to put a huge dent in overall growth.

Rising infection rates will also push concerns over inflation — at least in the near future — “a little bit into the background,” he said.

Much more difficult to assess, though, are the consequences of widespread restrictions on the unvaccinated or vaccine mandates.

For individual businesses and regions, however, even the current limits could prove devastating.

The weeks leading up to Christmas Day are among the most important shopping days in Austria and Germany, where people gather at outdoor markets to eat, drink and buy gifts. The region’s traditional holiday markets, which normally open from late November until Dec. 24, are also an important tourist draw, and generate wider revenue through hotel bookings and other cultural events.

Last year, many markets were completely shut down, so sellers and buyers were looking forward to this year.

In Vienna, the market on Maria Theresien Platz opened Nov. 17, its wooden stalls decorated with evergreen boughs and fairy lights. But the vendors were forced to shut down after only four days.

Maria Kissova stood amid piles of tablecloths, pillow covers and lace ornaments she had brought in from neighboring Slovakia, where she employs several women to sew the crafts. This year was her first time coming to Vienna, a trip that required months of planning and paperwork. With the lockdown, she faced the prospect of only several days’ worth of shopping, if the market is allowed to reopen as planned in mid-December.

“It was a shock” when the lockdown was announced, she said, adding that it was too early to predict the scale of the losses she could incur. “We just have to accept it.”

The Czech Republic and Slovakia have also imposed new restrictions. In Germany, some states have introduced partial lockdowns, and starting Wednesday, the unvaccinated will be required to show a negative COVID test before going to work.

By the end of this winter, pretty much everyone in Germany “will be vaccinated, cured or dead,” Jens Spahn, the health minister, said Monday.

A nationwide closure in Germany, the continent’s largest economy, is unlikely at the moment, but Carl B. Weinberg, chief economist at High Frequency Economics, warned that one there would drag down all of Europe. “If Germany locks down, Europe is going to go back into recession,” he said.