Nearly a year after the first Covid-19 vaccination campaigns began, the vast majority of the shots have gone to people in wealthy nations, with no clear path toward resolving the disparity 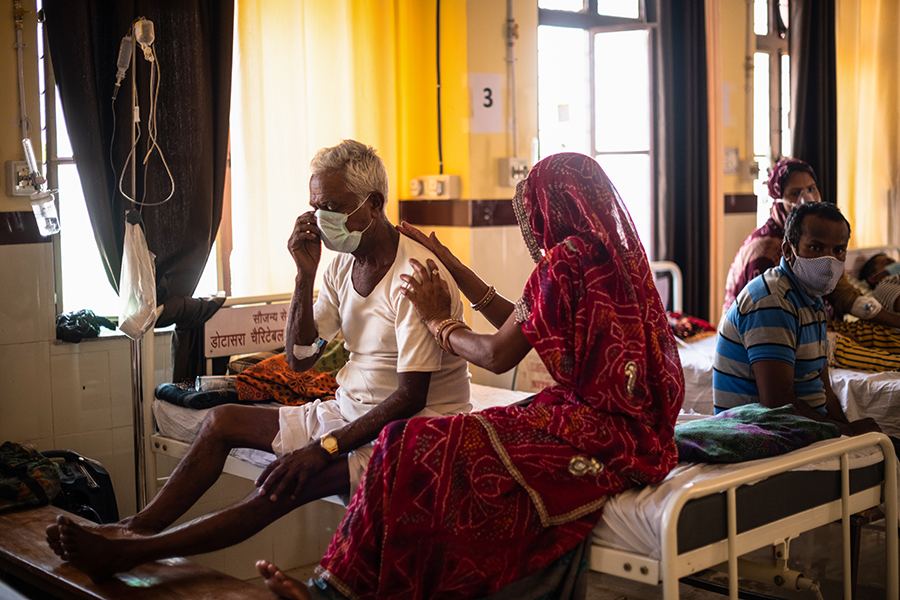 A Covid treatment center in Rajasthan, India, in May, 2021. Merck, the maker of a new antiviral pill, will allow generic manufacturers in India to produce the pills at a far lower price in more than 100 poorer countries. Photo by Rebecca Conway/Getty Images

Nearly a year after the first COVID-19 vaccination campaigns began, the vast majority of the shots have gone to people in wealthy nations, with no clear path toward resolving the disparity.

News this month that an antiviral medication had proved effective against the coronavirus in a large clinical trial has brought new hope of a turning point in the pandemic: a not-too-distant future when a simple pill could keep infected people from dying or falling severely ill.

The drug, molnupiravir, made by Merck, is easy to distribute and can be taken at home. The trial results showed it halved the risk of hospitalization and death among high-risk people early in their infections. The company has applied for emergency use authorization from the Food and Drug Administration; a decision could come in early December.

Unlike vaccine manufacturers Pfizer and Moderna, which have resisted calls for license agreements to let overseas manufacturers make their shots, Merck will allow generic manufacturers in India to sell the pills at a far lower price in more than 100 poorer countries. Most nations in sub-Saharan Africa, where vaccination rates are as low as 3%, are covered by the deal.

Drug access advocates say the Merck licensing deal is an encouraging start but only a small step toward equity. Merck has begun production of the drug, but it is unclear how much of the generic product will be available next year. The agreements leave out many undervaccinated nations, such as Ukraine, that have been hit hard by COVID-19. And an antiviral must be combined with reliable, affordable testing, which is also limited in many places.

Several other drugmakers, including Pfizer, are expected to announce efficacy data from trials of similar medications; the companies said it was too soon to comment on whether they would enter similar agreements.

All this means that treatments could remain largely with nations able to pay for early access, as they have done with vaccines.

“A drug like this that is kept at room temperature, you could get it to even the remotest parts of the world. It’s fair to say that this drug could prevent hundreds of thousands of hospitalizations and deaths,” said John Amuasi, an infectious disease expert and global health at the Kumasi Center for Collaborative Research in Tropical Medicine in Ghana. “But the barrier is going to be price. Look at how long it has taken for vaccines to reach Africa. My worry is that we are steadily on course to do the same with the drugs.”

More than 18 months into the pandemic, COVID-19 remains an illness largely to be endured rather than treated. The few medicines that have shown some benefit — such as monoclonal antibodies — are costly, complex to administer and, in poor nations, scarce or absent. Yet without widespread vaccination, those populations remain vulnerable to COVID-19 and need affordable medicines.

The U.S. government bought much of the supply of the antiviral remdesivir last year after early research showed it might speed recovery from COVID-19. Now it is pursuing a similar strategy for molnupiravir: It has a $1.2 billion agreement to purchase 1.7 million courses of the drug if it receives FDA authorization. That is 20% of what the company says it can produce this year. Other relatively well-off countries, including Australia, South Korea and New Zealand, have signed deals as well.

Merck was criticized two decades ago for selling its HIV drugs at prices unaffordable in Africa. This time, the company recognized the imperative of widening access early.

“We really did have a responsibility that, if this drug was found to be a safe and effective oral drug that someone could take at home, we need to make sure that, especially in low- and middle-income countries where they don’t have the strongest health care systems, that this would have very wide access,” said Jenelle Krishnamoorthy, Merck’s vice president for global policy.

The voluntary licenses that the company negotiated with the Indian drugmakers offer the possibility that governments in the poorest nations could buy molnupiravir for well under $20 per five-day course, compared with $712 in the U.S. deal.

The eight Indian companies are in clinical trials with their versions of the drug, and four confirmed to The New York Times that they expected to release results soon; one industry executive who was not authorized to speak on the record said he expected his firm to produce the drug for less than $10 per course.

“It’s not a coincidence that Merck has experience from HIV; internally, with their leadership and culture, they know that if they don’t address the access challenges, they will be slammed,” said Moon, co-director of the Global Health Centre at the Graduate Institute of International and Development Studies in Geneva.

Merck is also in negotiations with the Medicines Patent Pool, a U.N.-backed nonprofit that works to make medical treatment and technologies accessible. Charles Gore, director of the organization, said he hopes Merck will agree to a licensing agreement that could permit companies in an even wider range of places to make the drug while Merck sells its own product in rich nations. Such a deal, he said, would set an important precedent for other companies.

If Merck, Pfizer or other drugmakers do not ensure widespread availability of COVID-19 treatments, they could face widespread use of compulsory licensing, in which governments override intellectual property restrictions to allow manufacture of medications, often in emergency situations. While Merck will earn a royalty on the drugs sold by the generic makers and likely also on any deals reached through the patent pool, under compulsory licensing the company has no say in the price of the drug or the amount of the royalty.

Merck’s voluntary licenses for molnupiravir are all with companies in India, a concentration that could pose risks. COVAX, the U.N.-backed alliance of organizations working to deliver vaccines to poorer nations, was relying on the Serum Institute of India to produce the bulk of shots. But after the virus surged in March, the Indian government banned vaccine exports, and those are only resuming now.

There is also a supply chain question: Licenses with the U.N.’s Medicines Patent Pool could see companies all over the world making generic treatments. But most medications’ raw materials are made in India and China, and they have faced crunches throughout the pandemic.

Testing will be an additional challenge. The drugs work best if taken as soon as symptoms appear, and patients must be sure they have the coronavirus. But testing is scarce in many places: The WHO estimates that fewer than 15% of COVID-19 infections are detected in Africa, for example.

But if early antiviral treatment is made available globally, it could reduce spread. “Then you have fewer health systems incapacitated and a greater economic recovery for the benefit of everyone,” said Brook Baker, a law professor at Northeastern University in Boston who is part of a therapeutics access effort led by the WHO. “Even from a somewhat self-interested perspective, it’s shortsighted and counterproductive not to ensure access to these medicines.”

Tweets by @forbesindia
China's economy continues to slow, rattled by real estate and energy
OTT Revolution: A boon for filmmakers