Citing the Delta variant, Pfizer will pursue booster shots and a new vaccine

A booster given six months after the second dose of the vaccine increases the potency of antibodies against the original virus and the beta variant by five- to tenfold, Pfizer and BioNTech said 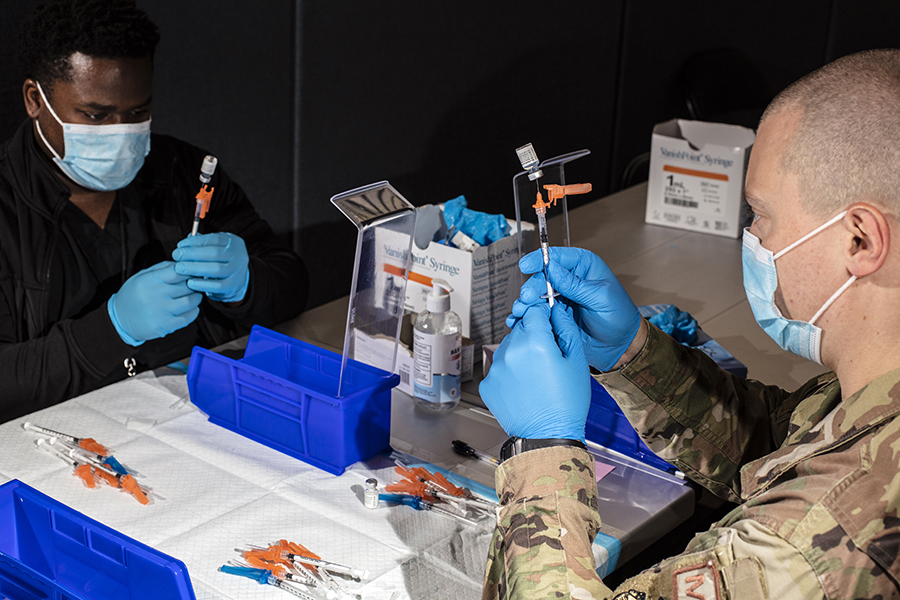 A member of the U.S. military and an employee of the New Jersey Institute of Technology prepared doses of the Pfizer-BioNTech COVID-19 vaccine at an immunization site in Newark, N.J., June 19, 2021. The Delta variant of the coronavirus can evade antibodies that target certain parts of the virus, according to a new study published on Thursday, July 8, 2021, in Nature.
Image: Bryan Anselm/The New York Times

Pfizer and BioNTech announced Thursday that they were developing a version of the coronavirus vaccine that targets delta, a highly contagious variant that has spread to nearly 100 countries. The companies expect to begin clinical trials of the vaccine in August.
Pfizer and BioNTech also reported promising results from studies of people who received a third dose of the original vaccine. A booster given six months after the second dose of the vaccine increases the potency of antibodies against the original virus and the beta variant by five- to tenfold, the companies said.
Vaccine efficacy may decline six months after immunization, the companies said in a news release, and booster doses may be needed to fend off virus variants.
The data have not been published, nor peer-reviewed. The vaccine makers said they expected to submit their findings to the Food and Drug Administration in the coming weeks, a step toward gaining authorization for booster shots.
But the companies’ assertions contradict other research, and several experts pushed back against the claim that boosters will be needed.
“There’s really no indication for a third booster or a third dose of an mRNA vaccine, given the variants that we have circulating at this time,” said Dr. Céline Gounder, an infectious disease specialist at Bellevue Hospital Center in New York. “In fact, many of us question whether you will ever need boosters.”
Federal agencies also sounded a dubious note Thursday night. Generally, Americans who have been fully vaccinated do not need a booster shot at this time, the FDA and the Centers for Disease Control and Prevention said in a joint statement.
“We are prepared for booster doses if and when the science demonstrates that they are needed,” the agencies said.
The delta variant, first identified in India, is believed to be about 60% more contagious than Alpha, the version of the virus that tore through Britain and much of Europe earlier this year, and perhaps twice as contagious as the original coronavirus.
The delta variant is now driving outbreaks among unvaccinated populations in countries like Malaysia, Portugal, Indonesia and Australia. Delta is also now the dominant variant in the United States, the CDC reported this week.
Until recently, infections in the United States had plateaued at their lowest levels since early in the pandemic. Hospitalizations and deaths related to the virus have continued to decline, but new infections may be rising.
It’s not yet clear to what extent the variant is responsible; a slowing vaccination drive and swift reopenings also are playing roles.
Citing data from Israel, Pfizer and BioNTech suggested their vaccine’s efficacy “in preventing both infection and symptomatic disease has declined six months post-vaccination.” Noting the rise of delta and other variants, the companies said that “a third dose may be needed within six to 12 months after full vaccination.”
Health officials in Israel have estimated that full vaccination with the Pfizer-BioNTech offers only 64% efficacy against the delta variant. (Efficacy against the original virus is greater than 90%.)
But Israel’s estimates have been contradicted by a number of other studies finding that the vaccine is highly effective at preventing infection — against all variants. One recent study showed, for example, that the mRNA vaccines like Pfizer’s trigger a persistent immune reaction in the body that may protect against the coronavirus for years.
“Pfizer looks opportunistic by hanging an announcement on the back of very early and undigested data from Israel,” said John Moore, a virus expert at Weill Cornell Medicine in New York. “When the time is right for using boosters here, the decision isn’t theirs to make.”
The companies described their plan to develop a new vaccine against delta as a sort of backup effort in case boosters of the original vaccine should fail. The new vaccine will target the entirety of the spike protein, as opposed to one part, and the first batch has already been produced.
The delta variant does pose challenges to the immune system. In the journal Nature, French researchers reported Thursday new evidence that the delta variant can partly sidestep the body’s immune response because of alterations to the spike protein on its surface that make it more difficult for antibodies to attack.
The team analyzed blood samples from 59 people after they had received the first and second doses of the vaccines. Blood samples from just 10% of people immunized with one dose of the AstraZeneca or the Pfizer-BioNTech vaccines were able to neutralize the delta and beta variants in laboratory experiments.
“A single dose of Pfizer or AstraZeneca was either poorly or not at all efficient against beta and delta variants,” the researchers concluded. Data from Israel and Britain broadly support this finding, although those studies also suggested that one dose of vaccine was still enough to prevent hospitalization or death from the virus.
But a second dose boosted efficacy to 95%. There was no major difference in the levels of antibodies elicited by the two vaccines.
“If you receive two doses of an mRNA vaccine, you are very well protected against severe disease, hospitalization and death with respect to any of the variants,” Gounder said.
The researchers also looked at blood samples from 103 people who had been infected with the coronavirus. Delta was much less sensitive than Alpha to samples from unvaccinated people in this group, the study found.
One dose of vaccine significantly boosted the sensitivity, suggesting that people who have recovered from COVID-19 still need to be vaccinated to fend off some variants.
Taken together, the results suggest that two doses of vaccine are powerfully protective against all variants, as is one dose for people who have recovered from COVID-19 and have some natural immunity.