The Centre's ambitious plan of 200 crore doses by the year-end will require ramp-up of production, approval and manufacturing of new vaccines, and removing hesitancy and inequities in access. How realistic are the targets? 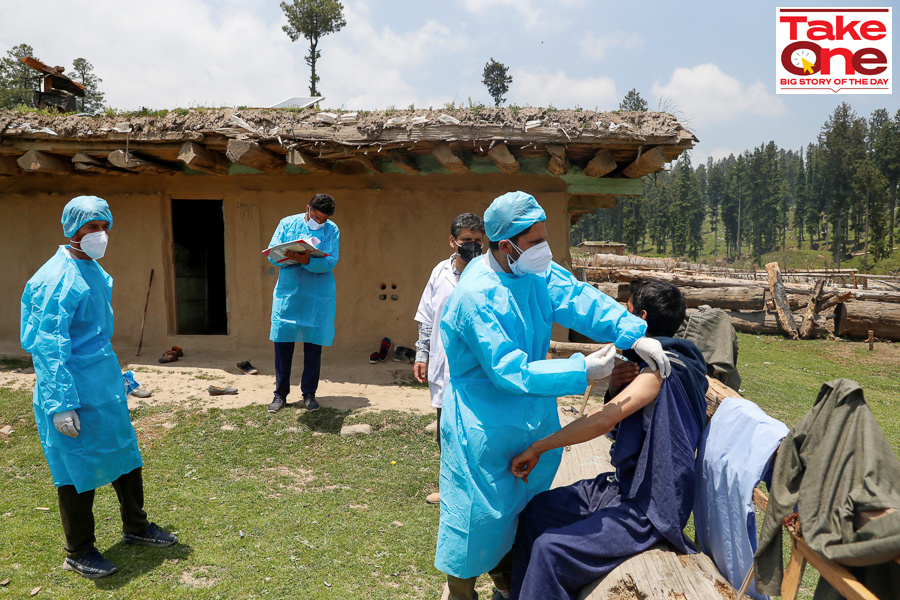 The world’s second worst Covid-19 affected country just can’t seem to figure out a viable vaccination programme. Despite that, it isn’t shying away from ambitious targets. It’s been five months since India rolled out what was touted as the world’s largest vaccination programme. Yet, numerous flip-flops, ranging from policies on procurements to approvals for vaccines, continue to plague the inoculation drive even though the country remains the world's largest vaccine maker. India has, so far, fully vaccinated about 4 percent of its population. Of its approximately 94 crore people above the age of 18, only 4 crore, or about 4.25 percent, have been fully vaccinated. As of June 9, a little over 20 percent have received at least one shot. In contrast, over 42 percent of the US population have been fully vaccinated so far, while at least 63 percent in Israel have received one jab. Across Europe, over 30 percent in various countries have been vaccinated. Meanwhile, India has now set an ambitious target of vaccinating all of its population above the age of 18 by December. By the looks of it, that’s going to be a Herculean task, especially considering the laggard pace so far. India has a population of over 134 crore. The country has been vaccinating at an average of 16 lakh doses a day since launching the vaccination drive about 145 days ago. If the government wants to finish vaccinating all the 94 crore adults above the age of 18 by December, that number needs to go up almost five times.

For now, the government has over 53 crore doses of vaccines available with it. If it has to provide over 200 crore doses by the end of this year, in addition to supply from domestic makers, it will also have to bank on supplies from the West, likely to kick in by August. “Vaccine supply will be increasing in the coming days. Seven companies in the country are producing different vaccines, three vaccine trials are at advanced stages,” PM Narendra Modi said in a televised address on Monday. Says KR Antony, a public health consultant, “We need 47 lakh population coverage per day as against coverage of 20 lakh per day because the vaccine production is only that much. There’s a huge deficit, so we have to be pragmatic.” According to him, the government’s changing vaccine strategies, including opening up vaccination to all adults when even the priority groups had not received their second dose, and then transferring responsibility to states when there were no vaccines available for purchase was like “declaring a war without armoury”. The government now claims to have secured 74 crore doses for use from August. That includes 25 crore doses of the AstraZeneca vaccine, commonly known as Covishield manufactured by the Pune-based Serum Institute of India, and 19 crore doses of Covaxin, developed and manufactured by Hyderabad-based Bharat Biotech. “All together, 74 crore doses have been secured for use from August onwards,” VK Paul, the chairman of the National Empowered Group on Vaccination, said at a press conference on Tuesday. In addition, the government has also secured 30 crore doses from Hyderabad-based Biological E for its vaccine that is currently being developed.

“It is a difficult task, and a Herculean one,” says Nandakumar Jairam, chairman and group medical director at Columbia Asia Hospitals. “But it is possible if we can increase the vaccines and the people who administer them.” The move to procure the vaccines, meanwhile, came after weeks of confusion surrounding the vaccine policy. Modi, in his first televised address on June 7 following the deadly second wave between April and May, reversed an earlier policy announced a month ago. “The Centre is taking back total control of vaccination now, and it will be implemented in the next two weeks. The Centre will give free vaccines to states for all above 18,” he said. “The announcement that, at least in principle, India as a national government takes the responsibility of providing free vaccines to all in a pandemic is a welcome, albeit a small step,” says Satyajit Rath, a scientist at the National Institute of Immunology and adjunct professor at the Indian Institute of Science Education and Research. The decision of rolling back the previous policy is partially welcome, although it is a case of ‘better late than never’, according to him. “Sadly, it seems that much of this decision-making is driven by image-related concerns, rather than by a practical focus on driving vaccination forward,” he says. Need to Streamline