Covid-19's entrepreneur explosion: Why America will never go back to business as usual

High unemployment, the magnifying power of the web and fresh fintech financing are fuelling an eruption of startups not seen in decades 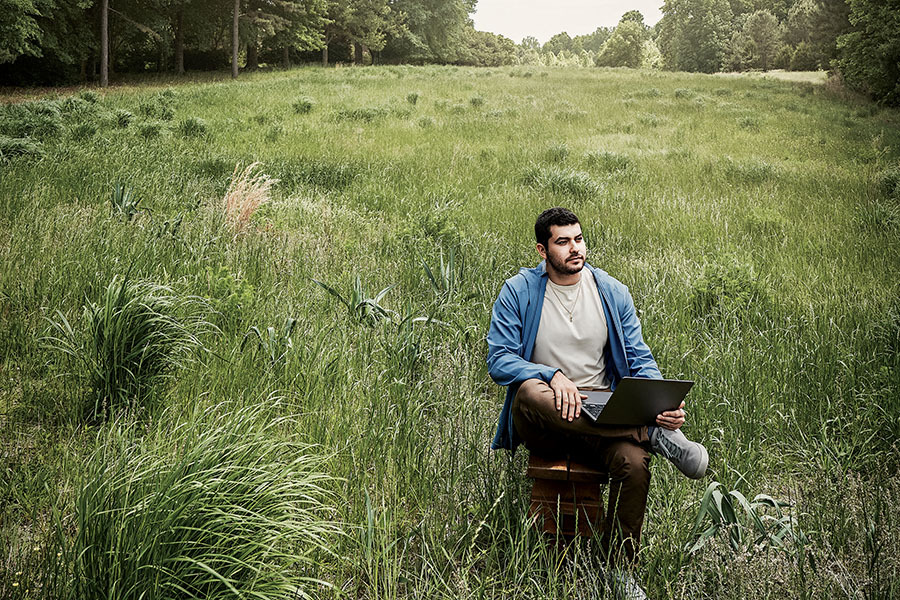 Matt Redler’s startup, Panther, helps companies hire low-cost but far-flung foreign workers. “Since the pandemic hit, we have all participated in an uncharted experiment around remote work.”
In the gritty, gray concrete lobby of Firebrand Collective—a women’s coworking space in Kansas City’s industrial West Bottoms district—Jackie Nguyen makes lattes laced with cardamom and lychee from her colorful mobile coffee shop. A colossal dragon head covers the shop, Cafe CàPhê, painted the bold yellow and red of the South Vietnamese flag, with dashes of bright blue in a nod to the French influence on the country’s food. “And of course, this is Kansas City,” says Nguyen, 32. “They’re the colours of the Chiefs and Royals, too.”

Cafe CàPhê serves “Hella Good Lattes” and “Saigon” iced coffee to some 200 customers a day. Monthly revenue is roughly $30,000. “It’s been a crazy, amazing ride,” says Nguyen, a first-time entrepreneur. “The only business I knew before this was show business.” 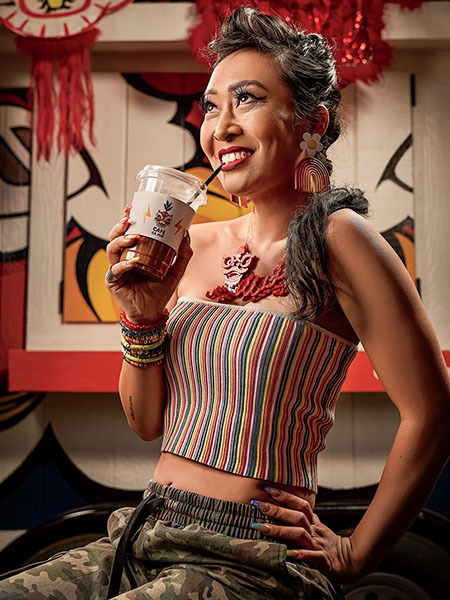 Former Miss Saigon star Jackie Nguyen left Broadway’s limelight to open Kansas City Vietnamese coffee shop Cafe Cà Phê. “I really wanted to own something on my own.”A little over a year ago, Nguyen was an actress who had spent nearly two decades in musical theatre. Before the pandemic, she made $90,000 a year on the touring production of Miss Saigon. On March 15, 2020, she performed in Fort Myers, Florida. The next day, the lights went out on Broadway. “I didn’t have a house, car or any significant savings,” Nguyen says. She moved to Kansas City from Long Island City, Queens, investing $10,000 from her scant savings and an additional $13,000 from Kickstarter (it helps to have 4,000 Instagram followers). She’s never going back to the Great White Way. “As an actress, my career was always at the mercy of someone else,” she says. “Now I get to make all my choices and get to be very intentional behind what I choose.”

Nguyen is one of the 4 million–plus people fuelling America’s unprecedented entrepreneurial explosion. Sparked by pandemic unemployment not seen since the depths of the Great Depression, a permanent shift in where we live and work, access to fresh sources of capital through fintech, ubiquitous cheap technology and dogged determination, Americans are betting on themselves and launching companies at a historic rate.
Every recession seeds a bumper crop of startups. As the maxim goes, necessity is the mother of invention. But this time it’s different. Just as the Covid recession, in its breadth, size and speed, was astounding, so will be its impact on America’s small-business landscape.

In 2020, more than 4.3 million people registered for new business applications, according to the US Census Bureau. That’s nearly 840,000 more than 2019—a 25 percent jump. It’s a stark difference compared to the 2008 credit crisis, which saw an 8 percent drop in new applications.
“This makes you sit up and pay attention,” says John Lettieri, co-founder and CEO of the Economic Innovation Group, a bipartisan think tank. “It’s not what many of us would have expected on the front end of this crisis.”
Up also are the number of new startups likely to hire employees. Labelled “high-propensity” businesses by the IRS, these potential job creators jumped 15 percent in 2020. “During 2008’s Great Recession, the new-employer businesses fell by nearly 230,000 from their previous year’s level,” Lettieri says. “During the Covid crisis, they climbed over 200,000—it’s a mirror image.”
And the most significant spikes in these job-creating businesses are happening far from expensive coastal hubs. Instead, the deep South is driving the boom, with triple-digit growth across Georgia, Mississippi, Alabama and Louisiana. To spotlight this upcoming, diverse, entrepreneurial generation, Forbes is launching the Next 1000, a reader-nominated list of small-business founders, scattered across America, with less than $10 million in funding and revenue. Businesses like these drive the economy, employing more than 30 million Americans.
The startup surge continues through 2021. In February, there were nearly 430,000 registrations for new businesses, an increase of 40 percent from February 2020—the last month before the pandemic froze the global economy. As the world gets back to business, many new founders like Nguyen aren’t looking back.
A month into the nationwide lockdown, 22 million jobs vanished. Unemployment neared 15 percent—the second-highest rate in 100 years, topped only by the Great Depression. The hardest hit were thriving experience-based industries like restaurants, retail, travel, Hollywood, sports and other live events. Nearly 40 percent of all jobs lost came from the travel and hospitality industries, based on a US Travel Association study. By mid-April 2020, the restaurant and retail sectors had each lost roughly 2.5 million jobs. Those lucky enough to keep their positions awoke to a seemingly endless new reality of remote work and virtual school.
After the pandemic terminated her gig as a wedding photographer, Jade Adams threw herself into her houseplant hobby, collecting more than 200 exotic plants like rare alocasias and philodendron pink princesses. When the vegetation overtook her apartment, she began selling the plants on Facebook and then, in July, she hawked $15,000 worth at a pop-up in Knoxville, Tennessee’s Central Collective event space. By last October, Adams, 23, bet her entire $20,000 savings on a brick-and-mortar shop called Oglewood Avenue. She earned the investment back within a matter of days. “The houseplant market has blown up during the pandemic,” she says. “More people are home and trying to bring the outdoors inside.”
Adams, who made about $48,000 a year as a wedding photographer, has grossed $265,000 in revenue since October. She uses Instagram to share photos of her plants and give gardening advice to 15,000 followers. In January, she hosted Houseplants 101 on Handmade, HGTV’s 630,000-subscriber YouTube channel. The former marital shutterbug isn’t going back behind the camera anytime soon. “I make too much money to do that,” Adams says. “This is it.”
If Covid’s economic carnage created the need for millions of Americans to start a business, technology provided the tools. Widespread video communication, social media, e-commerce, cloud computing and DIY websites make it cheap and easy for anybody to launch a global company from their basement.

“The internet economy has become so pervasive and so intertwined with every aspect of our economy,” says EIG’s Lettieri. “Today, you have the opportunity to do things remotely that would never have been possible even ten years ago.”
Shopify, the $150 billion (market cap) software company that lets small businesses sell online, saw a near-80 percent increase in new stores in 2020. Digital-payments giant PayPal had a 40 percent rise in business accounts over the same period. According to a Salesforce survey, a whopping 70 percent of new startups are either technology companies or digital-first from day one. Meanwhile, a host of online lenders are giving a wide range of founders more options to borrow cash. In 2020, business-loan marketplace Lendio fulfilled more than 100,000 non-PPP small-business loans—a 500 percent increase from the previous year.
“The influx of new technology has made the barrier to entry zero,” says Shopify’s global head of sales and marketing, Loren Padelford. “You can launch a company overnight and start selling globally.”
Tech lets people work from anywhere, too. In June 2020, Tampa resident Matt Redler co-founded the software company Panther to help businesses hire programmers and designers from around the world. Before the pandemic, Redler, 23, had used overseas coders to build a website for booking private chefs. Covid killed the appetite for that service, but Redler quickly shifted. He wagered that the rise of remote work would create a tidal wave of demand for cheap foreign labour. “Companies that tap into global talent pools will be far better positioned to excel over the next decade,” he says.
While less expensive than American employees, international workers come with a host of payroll and compliance headaches. Panther gives US companies access to tech workers in 160 countries. Its software handles background checks, onboarding and payroll, and helps firms follow local labour and tax rules. Redler has recently raised $4.2 million from Soma Capital, Adapt VC and angel investors including Jon Oringer, the billionaire founder of Shutterstock, who’s also a client. Says Redler: “Talent is everywhere, but opportunity is not.”
The Covid lockdowns proved that most employees can be as productive without a central office—and millions will never return to one. A March Harvard Business School study found that more than 25 percent of office workers hope to remain remote.
Maisha Burt launched Workchew, a Forbes Next 1000 honoree, in 2018 to turn hotels, bars and restaurants into coworking spaces during the daylight hours, when they’re often unused. Burt, 46, got the idea while working as a government consultant. “I was stuck working from home,” she says. “I needed something between a coffee shop, which was unpredictable, and a WeWork, which was too expensive.”
Before the pandemic, Burt targeted individuals, but she has since chased company-wide deals as employers look to reduce office space—and employees grow weary of working out of kitchens and repurposed closets. “We are reimagining what communal workspaces look like, cost and feel like,” Burt says. “For partners, we activate and monetise their underused spaces.”
In March, Burt raised $2.5 million from Harlem Capital Partners, Techstars Ventures, Etsy co-founder Chris Mag­uire and Kabbage co-founder Kathryn Petralia. Cash in hand, Burt is now expanding Workchew to 17 new cities including New York, Detroit, Seattle and San Francisco. “We’re charging full speed ahead,” she says.
She’s not alone. Millions are leaving their old careers to start new businesses. That’s a silver lining to the devastating and tragic Covid crisis. The 1930s, wracked by the Great Depression, also gave us television, commercial airlines and air conditioning. Just as FDR gave us Social Security and federally guaranteed bank deposits, President Biden is proposing a massive expansion of federal government programmes. Titans like Microsoft, Genentech, Vanguard and Home Depot emerged from the stagflation of the 1970s. And while the 2008 recession decimated the financial sector and housing markets, it also launched Instagram, Uber, Airbnb, WhatsApp and Slack.
The pandemic has already spawned more than 4 million new businesses. For their founders, there’s no going back. “We could see a revival of society and economy just as the Roaring ’20s unfolded after the first World War and the 1918 flu,” says Dan Wang, an associate professor of business at Columbia University. “It’s not a stretch to suggest that we will see an explosion of new ideas coming from these new ventures.”

Tweets by @forbesindia
Will Vodafone Idea manage to stay in the game?
Farm laws repeal: What lies ahead