Will Vodafone Idea manage to stay in the game?

Vodafone Idea's Q2FY22 earnings brought some relief for the debt-ridden company, but raising funds and Arpus are critical for its survival as focus shifts towards 5G technology 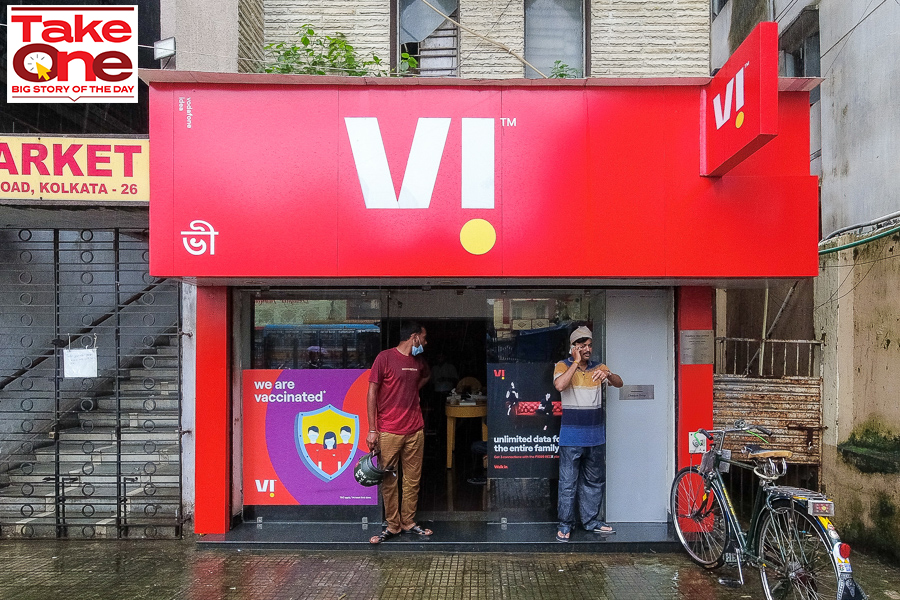 The longer Vodafone Idea (VI) struggles to raise fresh capital from existing or a new set of investors, the deeper it sinks into the abyss of uncertainty. The marginally improved operating performance which VI showed in its September-ended Q2FY22 quarter, for which results were announced last week, is acknowledged. But short- and long-term uncertainties—including repayment of non-convertible debentures, servicing of total debt, the urgent need to invest in 4G technology and buying 5G spectrum next year—are real investor concerns and continue to weigh down the stock.

VI and Bharti Airtel, to some extent, got lifelines from the government in September, through a four-year moratorium for companies to pay up statutory dues. VI has, like Bharti Airtel, accepted the moratorium for spectrum dues.  The VI board in October-end also agreed to opt for a four-year moratorium on payment of Adjusted Gross Revenues (AGR) dues. It means that additional funds will flow to the company and not towards paying back the government.

But the telecom landscape will become more competitive at the start of fiscal FY23, starting April 2022. India is likely to start the 5G spectrum auctions in April-May, media reports have quoted communications minister Ashwini Vaishnaw as saying, after the regulator Telecom Regulatory Authority of India (Trai) submits its final report in early 2022.

Reliance’s Jio Platforms and Bharti Airtel are planning on allocation of capital towards 5G but VI needs to intensify its need for fund raising before planning for the future.

Once the fastest-growing telecom company, VI has continued to lose subscribers and market share to leader Jio and rival Bharti Airtel over the past three years (see charts). And until clarity on fresh capital raising does not emerge, it is impossible to envisage how VI will not only gain market share from here on but also continue to retain it. The VI management declined to comment on its fund raising plans and growth strategy, when contacted.

Arpu gains but no muscle yet

India has the lowest average revenue per user (Arpu) in the world at $1.45 which came about in previous years as companies chose to offer low-cost voice plans to attract and retain subscribers. In the September-ended quarter, all the three telecom companies saw a rise in Arpus, particularly after Airtel, in July 2021, raised its entry-level (Rs 49) prepaid plan, hiking it by 61 percent to Rs 79. VI took a similar step with its own corresponding plan by discontinuing its Rs 49 plan in most of its circles and hiking rates. 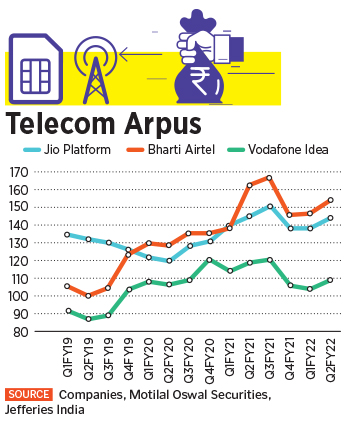 VI’s Arpu rose to Rs 109 for the three months to September from Rs 104 in the June-ended quarter. The one positive for VI is that its Arpus will continue to rise in coming quarters, though slowly, as its subscribers upgrade to 4G from 2G plans. The number of 4G subscribers grew by 3.2 million in the sequential quarter to 116.2 million.

But for any substantial gains in Arpus (not just for VI), the tariff hike needs to take place in the 4G prepaid segment, where Jio is possibly at its strongest. But Jio reported relatively weak Q2FY22 earnings, where it lost over 10 million subscribers—for the first time in ten quarters. This may reduce the chances of Jio turning aggressive to hike tariff rates across the board at this stage.

VI needs higher revenues to improve its weakened debt position. VI has a total debt of Rs 1.94 lakh crore, of which the majority is in the form of dues to the government. The company owes around Rs 22,800 crore to banks and financial institutions including State Bank of India (Rs 11,000 crore), Yes Bank (Rs 4,000 crore), IndusInd Bank (Rs 3,500 crore) and IDFC First Bank (Rs 3,240 crore). The smaller sized banks such as IDFC First and Yes Bank have a higher exposure to VI, as a percentage of their loan book and will obviously hope that it does not turn into a bad loan.

The VI management at the November 15 earnings meet with analysts reiterated its previous stand of increasing rates “when the time was right”. But in recent years VI has not been in a position to be the front-runner in hiking rates. It cannot risk losing more subscribers while pushing up rates across key prepaid offerings. VI lost 2.4 million subscribers (mainly 2G subscribers) in Q2FY22 from its June levels, to 253 million, though it curtailed the pace of the loss.

While the government relief package has clearly increased visibility and chances of survival for VI for at least a four-year horizon, it also came with an unwritten condition from the government: That the telcos will need to devise their own tariff hike plans.

The VI top management told analysts at their November earnings call that it is in active discussion with potential investors and “expects to conclude the fund raising plan during FY22”. This rhetoric needs to shift into action very soon. 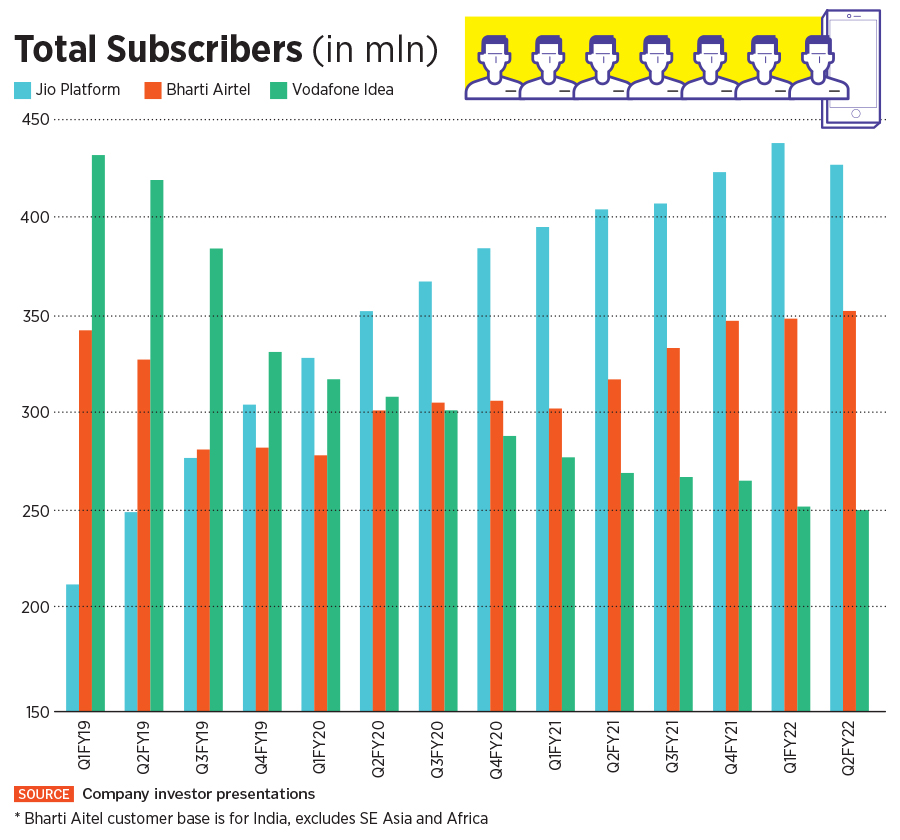 “Though VI’s survival prospects have improved, it is still far from being considered competitive enough to stem its RMS (revenue market share) decline,” says analyst Balaji Subramanian at IIFL Securities. VI’s RMS is estimated at 19 percent, while Jio’s is much higher at 44 percent and Bharti’s is at 35 percent. Balaji estimates that VI will need to raise $2.5 billion in equity and double its capex (of Rs 1,300 crore) if it has to preserve its current RMS. Though this fund raise figure is not a definitive number, VI will need to raise something close to this figure to stay competitive in the medium term.

The uncertainties surrounding VI’s fresh fund raising towards investments and the need for higher Arpus is weighing the stock down. Piyush Pandey of Yes Securities says the stock trades at an EV/Ebitda of 9.5x on FY24 estimated earnings and adds that the continuing migration of subscribers from 2G to 4G will drive growth in VI’s Ebitda. IIFL’s Subramanian said he is yet to build in any 5G spectrum purchases. If one assumes a lower capex run rate, VI is likely to see subscriber losses and, hence, the required Arpu for 10x net debt-to-Ebitda by end-FY24 [his current estimate is 34x} would remain close to Rs 200.

Balaji and Pandey have a ‘sell’ rating for VI while Aliasgar Shakir, an analyst at Motilal Oswal Financial Services, is maintaining a ‘neutral’ rating for VI. “A significant amount of cash required to service its debt leaves limited upside opportunity for equity holders,” he said in a note to clients post Q2FY22 earnings. The current low Ebitda would make it challenging to service debt without an external fund infusion. VI’s stock has fluctuated in a narrow range of Rs 4.8 to 13.7 since June 2019 at the stock exchanges, ever since reports of the government dues emerged.

The coming 2-3 months will be most critical for VI as it faces NCD redemptions and has to finalise the fund raising plans (which the management has promised) by March 2022.

Tweets by @forbesindia
Apple to start letting people fix their own iPhones
Covid-19's entrepreneur explosion: Why America will never go back to business as usual