For the first time, a sportsperson has unseated Bollywood biggies for pole position; Salman Khan drops to no 3 as Akshay Kumar climbs to second place 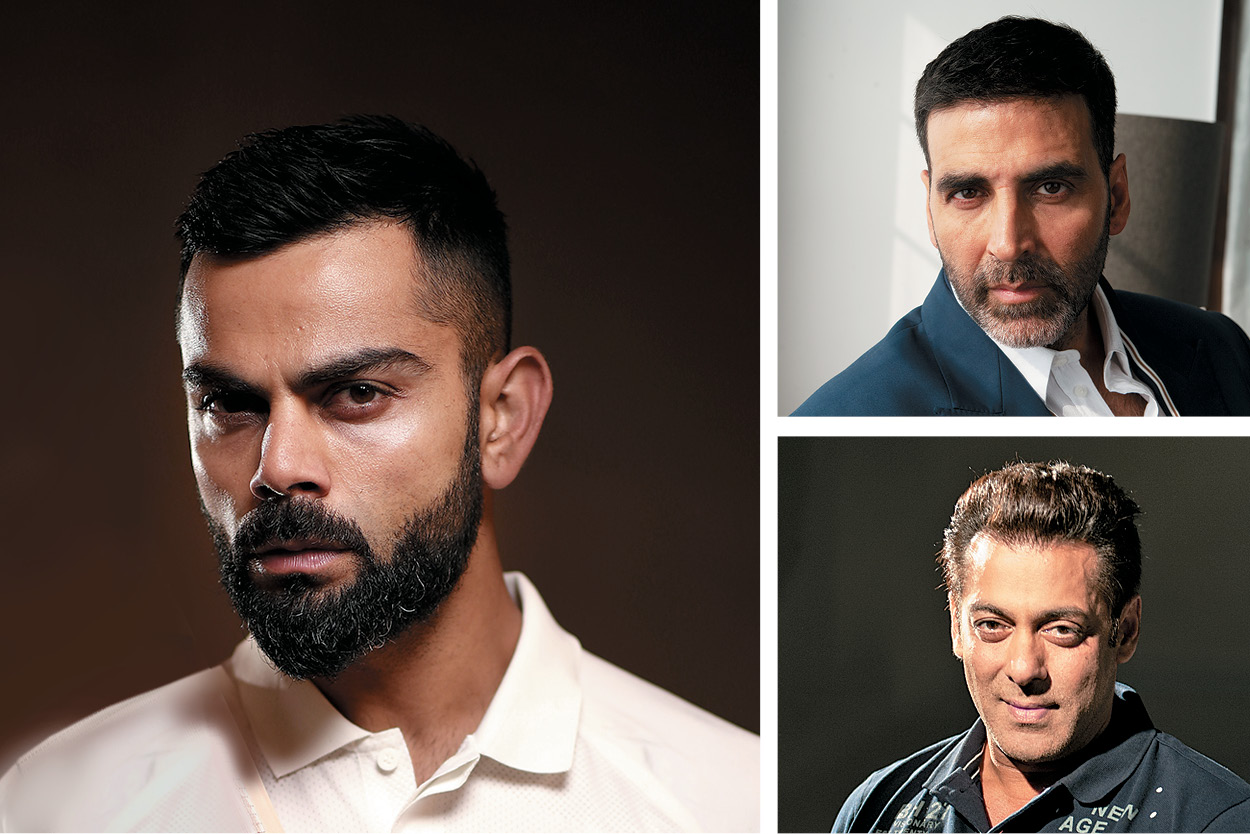 In 2018, the domination of the Khans of Bollywood was being challenged–at least in terms of annual earnings–by a sportsman: The hugely popular and ever consistent cricketer Virat Kohli. Kohli’s march continues this year as, for the first time in eight years since the launch of the Forbes India Celebrity 100 List, he has replaced actors at the pole position. The 31-year-old is now perched right at the top on the back of ₹252.72 crore he earned between October 1, 2018, and September 30, 2019 (our period under consideration). This was through match fees, the BCCI central contract, brand endorsements and an eight-figure fee for every sponsored Instagram post. Actor Akshay Kumar (₹293.25 crore) climbs up a spot to No 2 while Salman Khan, who ruled at the top since 2016, slips to No 3. CLICK HERE to view the 2019 Forbes India Celebrity 100 list It is also for the first time that two women, Deepika Padukone and Alia Bhatt, are part of the Top 10. Besides, nearly a third of the list are women, backed by earnings through lucrative brand endorsements and a high fame quotient—actors like Disha Patani, Kriti Sanon and Sara Ali Khan have debuted on the list, thanks to endorsements and fame despite not having a large volume of work through our time period. Overall too, this year’s 100 celebrities have earned 22 percent more than last year’s, with their revenues jumping to ₹3,842.94 from ₹3,140.25 crore in 2018. Shah Rukh Khan, who had just one release, an underwhelming Zero in 2018, climbed back into the top 10, despite earning 27 percent less than last year, with ₹124.38 crore. Cricket legend Sachin Tendulkar holds a unique distinction of featuring in the top 10 every year despite retiring from the game in 2013. This year, his earnings, excluding returns on investments, stood at nearly ₹77 crore. Brand Tendulkar is indeed intact and going strong. As seen for a few years now, box-office ticket sales alone are not impacting the earnings of entertainment celebrities. The sale of satellite TV rights, music rights, home video and digital streaming by producers, several of whom are top actors, means they will still take a sizeable amount home even if the movie struggles at the theatres. Podcast: Inside the high-stakes Celebrity 100 issue, and how Virat Kohli unseated Salman Khan The impact of alternative media and platforms such as Amazon Prime, Netflix, Star India’s Hotstar, Viacom 18’s Voot and Zee5 have facilitated the rise of over-the-top (OTT) actors. This has seen the fortunes of Kalki Koechlin (Made in Heaven, Sacred Games) and Saif Ali Khan (Sacred Games) gain substantially. We also introduce celebrity chefs, such as Ranveer Brar and Vikas Khanna, in our top 100 list, backed by their TV shows and brand endorsements. In the next few pages, read our in-depth profiles, trend stories and data analysis to get a glimpse into the making of the stars and the brands. The 2019 Celeb 100 List compiled by Divya J Shekhar, Naandika Tripathi, Naini Thaker, Pankti Mehta Kadakia, Pranit Sarda, Salil Panchal and Varsha Meghani METHODOLOGY The 2019 Forbes India Celebrity 100 List rankings are based on two parameters: Estimates of earnings through professions and endorsements of celebrities and estimates of their fame. Event appearances, private performances, returns on investments and stake sales are not considered. The period under consideration for both is October 1, 2018, to September 30, 2019. HOW WE CALCULATED EARNINGS For each celebrity, we got independent estimates from multiple sources—talent management agencies, film and TV production companies, music celebrity managers, sports consultants and marketing agencies or brand marketers. HOW WE CALCULATED FAME We tracked the media visibility of celebrities across print and tabulated their social media reach via Instagram. HOW WE CALCULATED RANK The rank is an aggregate of the estimated earnings and the fame quotient. Hence, some celebrities, who are scoring very high on fame, might emerge as ranking higher than those who have higher revenues but a poor fame score. LexisNexis® helped provide fame data relating to celebrities’ print exposure in newspapers and magazines while Raindrop Media, Exceed Entertainment and Cornerstone Sport and Entertainment helped collate names of brands endorsed. We were supported by GroupM ESP, Indiantelevision.com Group, Super Cinema, Artist Management, Able Sports & Entertainment, besides several others in the earnings data collection process. The entire process was verified and audited by Ernst & Young, our official tabulators for the project. Note: Forbes India has arrived at a fair estimate of the total earnings (front-of-camera appearances, match/retainer fees or music concerts in many cases) of each of the persons who figure in this list by using multiple sources in the entertainment and media industry. However, since these estimates are meant for a limited purpose, they may not be accurate or official and cannot be relied upon for any legal or compliance purposes. The ratings given are subjective and may not necessarily reflect the actual financial worth or fame of the persons featured. The rankings are based on these estimates of earnings and media visibility of each celebrity across print and Instagram from October 1, 2018, to September 30, 2019. The numbers are, therefore, merely indicative. We (at Forbes India magazine, Networkl18 Media & Investments Limited) have done our best to verify the information published, but do not take any responsibility for the absolute accuracy of the information. CLICK HERE to view the 2019 Forbes India Celebrity 100 list