What's next in the Jio-Vodafone-Bharti Airtel rivalry? 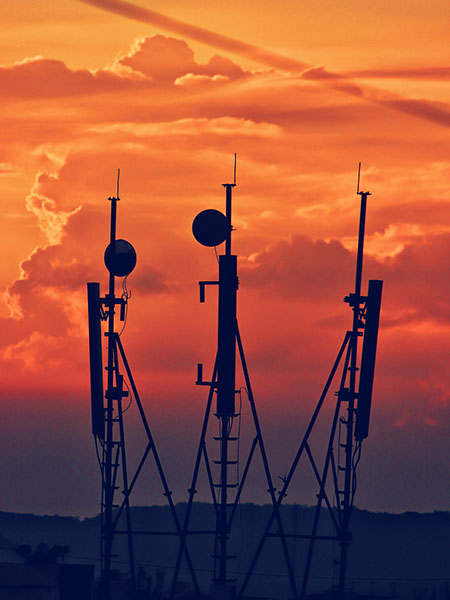 The fresh interest in India’s telecom space continues to be driven by the potential of internet usage and consumption per user
Image: Sumit Yelpale / EyeEm / Getty Images

India’s top telecom companies—Jio Platforms, Bharti Airtel, Vodafone Idea and the state-run BSNL—are in the midst of a phase they have not seen in years. A series of investments flowing into the leading player Reliance Industries Limited’s (RIL) Jio Platforms has led to private equity firms, investment bankers and analysts closely mapping the average revenue per user (ARPU), subscriber costs and churn of these firms. It is a far cry from recent years when they battled more stringent regulatory hurdles and price wars, while competing among nearly 10 players.

In about six weeks, Facebook and eight other global giants—Silver Lake Partners, Vista Equity, General Atlantic, KKR, Mubadala Abu Dhabi, TPG, L Catterton and Abu Dhabi Investment Authority (Adia)—announced 10 separate investments into RIL’s wholly owned subsidiary Jio Platforms, which has evolved from a voice-and-data connectivity player to one with integrated ecommerce and online payments platforms. (RIL is the owner of Network 18, publisher of Forbes India.) Over a fifth—22.38 percent—of Jio has been sold to these investors for a combined total of Rs 104,326.65 crore (around $13.7 billion). Facebook—seen as a strategic investor with a 9.99 percent stake in Jio—is keen on the verticals related to retail and digital payments, and in building synergies with RIL. It brings its strength of data analytics and the experience of building platforms such as Instagram. Global technology investor Silver Lake had backed China’s ecommerce giant Alibaba prior to its IPO in 2014, and RIL is hopeful the same would work for Jio. Most of the other investors are of a financial nature, though Adia, which has a special focus on insurance, could find synergies with RIL and Jio in the future. Jio’s rivals, Bharti Airtel and Vodafone Idea—for whom cash flows and profit could come under a cloud on account of past dues to the government—are unlikely to be overlooked. American technology giant Amazon is believed to be in talks to buy a 5 percent stake in Airtel for a value of $2 billion. Talk of a potential investment by Google into Vodafone Idea is also doing the rounds, though both Airtel and Vodafone Idea have denied such developments. 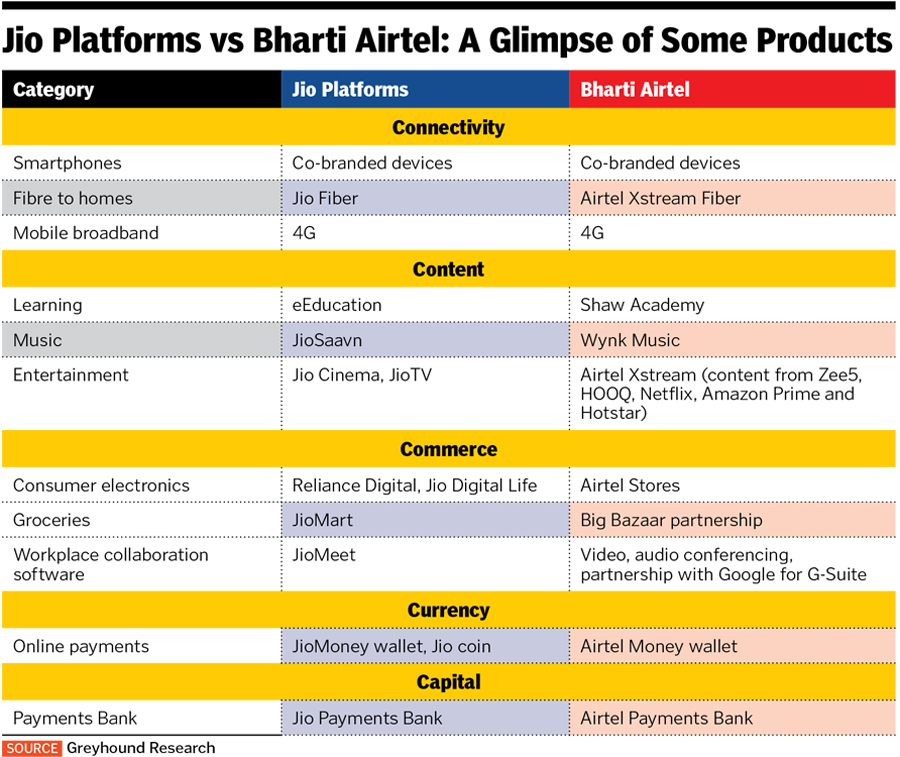 Connectivity is the backbone to growth engines such as community, content, commerce, currency and capital, in order to build a digital technology matrix, says Greyhound Research, a digital and technology research and advisory firm. These are the areas that Jio and Airtel, which have the financial muscle, have covered and compete in with a vast range of products (see table). “Reliance’s strategy has been vertical integration, by owning assets and portfolios, essentially the supply chain end-to-end,” says Sanchit Vir Gogia, founder and chief executive of Greyhound Research. Airtel, backed by SingTel, the largest shareholder in holding company Bharti Telecom, has grown in size through partnership-led strategies.  Backed by entertainment content from partners such as Zee5, HOOQ, Netflix, Amazon Prime and Eros Now, Airtel’s Xstream and Wynk—which competes with JioSaavn—will continue to drive growth in the coming quarters. JioSaavn, a market leader, announced a special offer for June to get brands to advertise on it, after LinkedIn’s former director for marketing solutions, Virginia Sharma, joined the streaming platform in May. 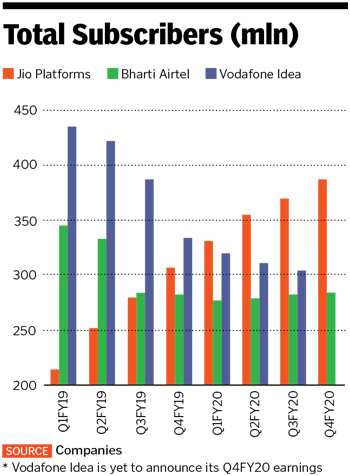 With the country under lockdown for 10 weeks, telecom had remained one of the backbones of activity, as people increased the usage of voice calls, home broadband and video conferencing applications to communicate and continue with business activity while working from home (WFH). Just a few months prior to the Covid-19 outbreak, telecom companies had announced a steeper-than-expected hike in tariffs for pre-paid plans in December 2019. In May, Airtel reported an 8.1 percent jump in revenues at Rs 23,723 crore, its highest in at least 30 quarters, led by strong ARPUs, which firmly indicate that it will be able to bridge the widened revenue gap with Jio. During the first four weeks of the lockdown, Vodafone Idea has upgraded 66,000 cells (a geographic area that is covered by a single transmitter) with more capacity across India, and it is on course to complete its network integration—as part of the Vodafone India and Idea Cellular merger—by end of June as scheduled. Make-or-break phase “This is the time to put a shot in the arm; it is the make-or-break period,” says Gogia. Earlier there was no lead player but now Jio has emerged as the new incumbent, leading in both revenues and market share. “The pace of change has now risen manifold due to its presence.” The fresh interest in India’s telecom space continues to be driven by the potential of internet usage and consumption per user, even as Indians—backed by cheap data plans, inexpensive mobile handsets and an insatiable need for content—are upgrading to 4G networks. Of the 1.1 billion subscribers of telecom services, only 55 percent use the internet. But data consumption per Indian is high, at 11 GB per month, according to data by Nokia this February. “This is why investors such as Facebook and others are betting big on India,” says Isha Chaudhary, director at Crisil Research. 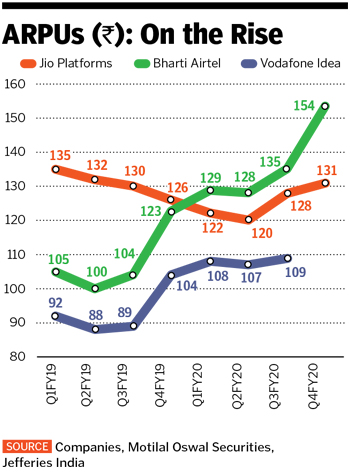 Since March, home broadband and improved Wi-Fi and bandwidth levels have become essential due to increased video conferencing, webinars and streaming of live events. Zoom, WhatsApp and Microsoft Teams have emerged as the most frequently used online communication tools in the Covid-19 world, according to Voice&Data. Jio has already started to promote WFH through Jio Connectivity and Microsoft Teams. The Jio-Microsoft alignment is “similar to how Microsoft started its engagement with Ola”, says Gogia. Critical among all elements will be how Facebook’s WhatsApp develops in India, its biggest market, with over 400 million monthly active users. WhatsApp has signed a commercial agreement with Jio—through its ecommerce venture JioMart—to boost Reliance Retail’s commerce business. From an ordering platform, the aim is to provide a payments solution on the same app. But WhatsApp will have some catching-up to do with Google and Amazon, which already have digital payment apps. Digital advertising: The new market With Jio gaining leadership position among subscribers and Airtel stabilising its position as a worthy rival, global technology giants understand the need to invest in these digital platforms. Despite huge databases, telcos have little or no capability to process and drive digital advertising. “In India, these technology giants find a large and captive customer base, which is the largest market left for them in the world, especially since all of them got cut out of China,” says Rohan Dhamija, head (Middle East and India), Analysys Mason, a global consultancy and research firm. “There are synergies that can be driven by these technology companies selling their products or increasing units to this captive base.” According to Dentsu Aegis Network, a global ad and marketing services group, the digital advertising industry is set to grow to Rs 58,550 crore by the end of 2025, clocking a CAGR of 27.42 percent. Though digital advertising rates for buyers have dropped in the past two months, they are likely to improve in June and July. While the focus is on Jio’s evolution, Airtel—with its deep pockets, and a steady subscriber base—cannot be displaced. Its wireless revenues and ARPUs grew faster (see box) than Jio’s in the March-ended quarter, and “it reinforces our view that Bharti may have closed the gap with Jio on revenue trends, and market share between the two players should not diverge here on”, says Manish Adukia of Goldman Sachs. Airtel’s stock has gained 25 percent year-to-date at the BSE. To repay government dues, Airtel had raised $3 billion through a qualified institutional placement and a foreign currency convertible bond in January. Airtel maintains it has paid off its outstanding adjusted gross revenue (AGR) dues, which it estimates at Rs 13,004 crore, but is only a third of the department of telecom’s (DoT) assessment.  Fight for market share With higher capital outlays in the form of government dues—estimated to be Rs 58,250 crore by the DoT—and additional investments required towards upgradation of 4G networks, Vodafone Idea is not comfortably placed, considering that both parent companies Vodafone Group and Idea Cellular are unlikely to pump in fresh money soon. The Supreme Court has asked telcos to file individual affidavits detailing the roadmap they propose to clear the dues. When the Vodafone India and Idea Cellular merger was announced in 2018—it will be completed by June end—it was the largest telecom firm in India, with 408 million active subscribers and 41 percent of the revenue market share. It has since lost 10 percent market share. “Vodafone Idea will continue to shrink to retain a 15 to 20 percent market share on a pan-India basis, and India will become a 2.5 player market over the next few quarters,” says Dhamija. Vodafone Idea declined to comment on its future strategy, being in a silent period. A company spokesman says: “Vodafone Idea is moving to a new operating model, which is leaner, agile and more cost-efficient.” It will see its pan-India presence of 22 circles being clubbed into 10 clusters. It will need to focus on these clusters—where in some areas it is the leader—and try to ebb the loss of subscribers by investing more in 4G network. Gaurav Dua, head of capital market strategy, Sharekhan by BNP Paribas, says: “There is scope for it to improve cost efficiencies by cost-optimisation and investing in re-farming of spectrum [re-deploying spectrum and re-allocating it to others].”  He pegs Vodafone Idea’s enterprise value to be at a 25 percent discount to Airtel, in terms of valuation, which factors in the uncertainties relating to outlays. In the near future, tariffs will continue to rise and ARPUs too will improve as customers spend more. So, will networks remain neutral? The debate will continue. The next 24 months will decide the new direction the industry will take.