Prime Minister Narendra Modi will officially unveil the plan on June 20; no discussion yet on how to draw migrants back to cities 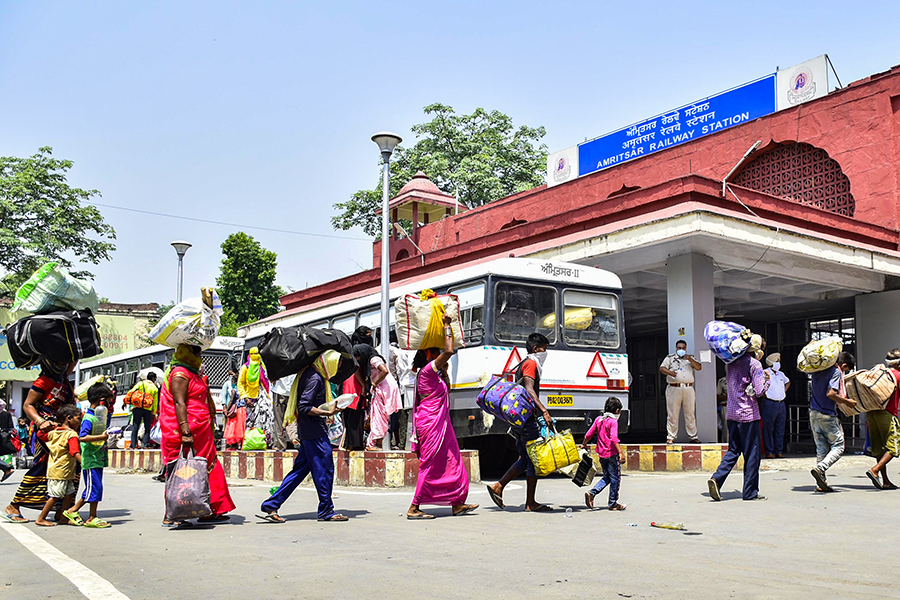 Finance Minister Nirmala Sitharaman on Thursday announced details of the government’s plans to provide livelihood to migrant workers who have gone from major cities, after the Covid-19 outbreak, to their hometowns. Jobs will be provided to migrant workers from 116 districts in six states, which include Bihar, Uttar Pradesh, Madhya Pradesh, Rajasthan, Odisha and Jharkhand, Sitharaman said. This data considers districts where the migrant population gone back is over 25,000. This entire rural upliftment and employment programme—called the Garib Kalyan Rojgar Abhiyaan—will be unveiled by Prime Minister Narendra Modi through a video-conference, starting from Telihar village in Khagaria district of Bihar, on June 20. This campaign will run for 125 days, thereby taking care of employment of migrants for four months. “We want to front load the funds allocated for these 25 schemes and ensure that the migrants get employment at least over the next four months, so that their man days will be used effectively,” Sitharaman told the media. “Through this, [employment] assets will be created in the form of roads, wells, poultry sheds, construction, rural housing, development of village infrastructure, horticulture, community sanitation works, water conservation and harvesting, she said. Data showed that employment would be provided to about 67 lakh migrants through 25 of the government’s existing schemes, resulting in a total outlay of Rs 50,000 crore. It is unclear how much of this amount has already been allocated for through the Budget announced in February. The government has faced flak from the opposition for being unable to address the concerns of employment for migrant workers and provide them safe routes back to their hometowns.

In the middle of May, Sitharaman had announced a series of measures to try and curb the damage caused to business activity, employment and growth by Covid-19. These were mainly through credit lines extended by banks towards small and medium businesses, migrant labourers and raising the budget allocation under MGNREGA (Gandhi National Rural Employment Guarantee Act). India suffered hard due to the nationwide lockdown, which lasted around 70 days, after which malls, corporate offices, markets and retail stores in large metros have been allowed to open in June. Even while corporate activity and services has started to limp back, economic activity and growth has taken a big hit. India grew by just 3.1 percent in the three months to March—its slowest pace of growth in 11 years (since Q4FY2009), data released in end-May showed. Construction, real estate and manufacturing growth all decelerated, dragging the figure well below the Q4FY19 figure of 5.8 percent. Sitharaman declined to discuss what incentives will need to be provided to get migrants back from their homes to work in the cities, when normalcy returns. “It is too early to talk about the impact on manufacturing. Industries are resetting their businesses. Many are operating at about 40 to 55 percent capacity. The plan to draw [these workers] back or think about some other alternative will be considered later,” she said.