Finance Minister Nirmala Sitharaman has addressed supply side issues with ₹20 lakh crore package, but there is little to boost demand. Experts say these are just support measures in the absence of direct cash infusions 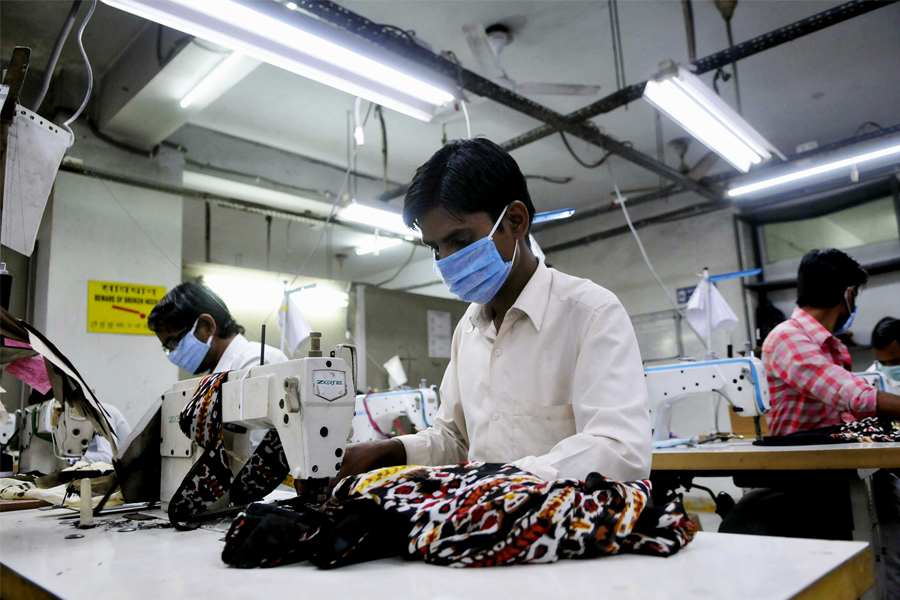 The ₹20.97 lakh crore package of fiscal-led support is aimed at assisting the lowest strata of the economy, including the urban poor, the rural migrant workers and MSMEs, whose businesses and livelihoods have come to a standstill due to the Covid-19 lockdown
Image: Sunil Ghosh / Hindustan Times via Getty Images

As the country battles the coronavirus and faces an uphill task of reviving growth, the government in mid-May announced an economic stimulus of ₹20.97 lakh crore. In a five-part series, Finance Minister Nirmala Sitharaman explained that the fiscal-led support, which forms 10 percent of the Gross Domestic Product (GDP), is aimed at assisting the lowest strata of the economy. These include the urban poor and rural migrant workers, low-income farmers, street vendors and credit-starved micro, small and medium enterprises (MSMEs) whose business has been badly hit because of the lockdown.

Among the proposed aid is an increase of ₹40,000 crore in the allocation towards MGNREGA (Mahatma Gandhi National Rural Employment Guarantee Act), apart from hiking the borrowing limit for state governments from 3 percent of GDP to 5 percent. For MSMEs, Sitharaman announced collateral-free automatic loans worth ₹3 lakh crore for units that have a ₹100 crore turnover or with an outstanding loan of ₹25 crore. Research reveals that around ₹150,400 crore will be the fiscal impact of all the measures announced by finance minister (see table). In what is billed as a reform for the long term, Sitharaman said all sectors will be open to private players, while public sector units will remain in certain strategically important sectors.

The announcement is likely to have varying degrees of impact on different sectors. However, what is disconcerting is that the minister did not mention how much money will be spent in 2020 on any of these measures. “It is not clear how many of these reforms are linked to the ongoing pandemic [they could have been announced any time]. In fact, we are not sure about the timeline of implementation of many of these reforms,” says Sunil Tirumalai, head of research at Emkay Global Financial Services. One such example is a fresh ordinance to freeze new cases for up to a year under the Insolvency and Bankruptcy Code.

It is also surprising that the government has not offered any direct assistance to sectors such as airlines, hospitality and tourism-related businesses that have been worst hit by Covid-19. Estimates from KPMG India and the International Air Transport Association suggest that a combined 71 lakh jobs are at risk because of the lockdown.

“These businesses [travel, tourism, hotels and restaurants] will have to continue incurring operating costs without generating much sales… they have not received any government support so far to alleviate some of these costs. So while the government’s measures will prevent them from defaulting in theory, in practice, these firms will struggle to operate, incur higher debt, and some of them could ultimately become insolvent if they are forced to operate at low capacity for long,” says Sonal Varma, chief India economist at Nomura, a financial services company. 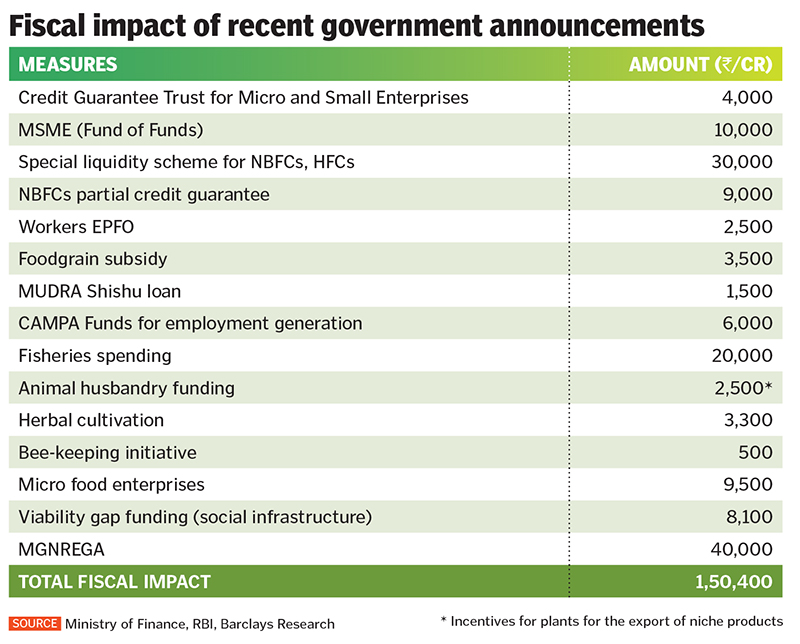 Disruptions Ahead
Despite best intentions, the on-ground reality for an economy of India’s size as it tries to restart businesses—by easing lockdown restrictions in some areas—is different. With thousands of migrant workers having left the big cities, which became coronavirus hotspots, one is already experiencing disruptions in processes at factories which have resumed operations in green or orange zones.

There are reports of shortage of truck drivers in transporting goods and services, and labourers. “Labour concerns and the need for social distancing will result in capacity utilisation being low even as working capital requirement will be high,” says Ambareesh Baliga, an independent stock market analyst.

Equally worrying is the fact that India is still unable to control the spread of the virus. As of May 19, the country reported 101,139 positive cases and 3,163 deaths because of the coronavirus. A total of 23,02,792 samples have been tested so far, which indicates a testing rate of 1,668 per million. In such a scenario, cases could peak further in June or July, resulting in extended lockdowns.

Sanjiv Chadha, managing director and chief executive of Bank of Baroda, one of India’s largest state-owned banks, says recovery from Covid-19 will take a long time. About 90 percent of the bank’s borrowers have opted for the loan moratorium, Chadha said at a webinar organised by Care Ratings. There was “high uncertainty in terms of the lockdown, demand resurrection and consumer behaviour” and hence to point out normalcy “would be debatable”, he said, adding that the bank is likely to come up with a solution to this problem.

All these factors have impacted investor sentiment. The benchmark 30-share Sensex fell by 4.27 percent in the week since the reform announcements were made on May 12, and about 28 percent year-to-date. Growth forecasts for the current financial year continue to be weak. Most rating agencies and equity research firms have pegged GDP growth to be anywhere between 0 percent and 1 percent for FY21.

Delay in Modalities
Reforms such as the targeted affordable housing scheme through a public-private partnership will need assistance from various industries, including real estate, housing, construction and infrastructure, which are dependent on the migrant labour force. To assist street vendors through a lending programme of ₹10,000 per vendor, different state governments and local municipal administrative bodies will need to create databases and work in a syndicated manner.

“How some of these modalities fall into place and ensuring that the needy get access to the capital they require (in the case of collateral-free automatic loans to MSMEs) are a concern,” says Saswata Guha, director (financial institutions) at Fitch Ratings. There have been mixed signals from the industry on whether the support schemes provided to MSMEs are reasonable or not. “These government measures should not be called stimulus measures. There are no cash infusions and neither have measures been taken which will spur demand or growth. These are merely support measures,” adds another analyst at a private ratings firm on condition of anonymity.

Barclays Chief India Economist Rahul Bajoria, however, argues that “support is what is required”. “These small businesses may not survive. MSMEs will have credit lines in place and they can decide on how to grow their business. The challenge for India is the operational framework and making access to capital easy,” he says.

Sitharaman dodged some critical and sensitive questions on how the government proposes to fund all these measures. While announcing the last tranche of measures, she only said: “We are just two months into the new financial year and just three months from the last budget. You must allow it for a bit later (to discuss the fiscal deficit).”
Bajoria has pegged the FY21 fiscal deficit at 6 percent. 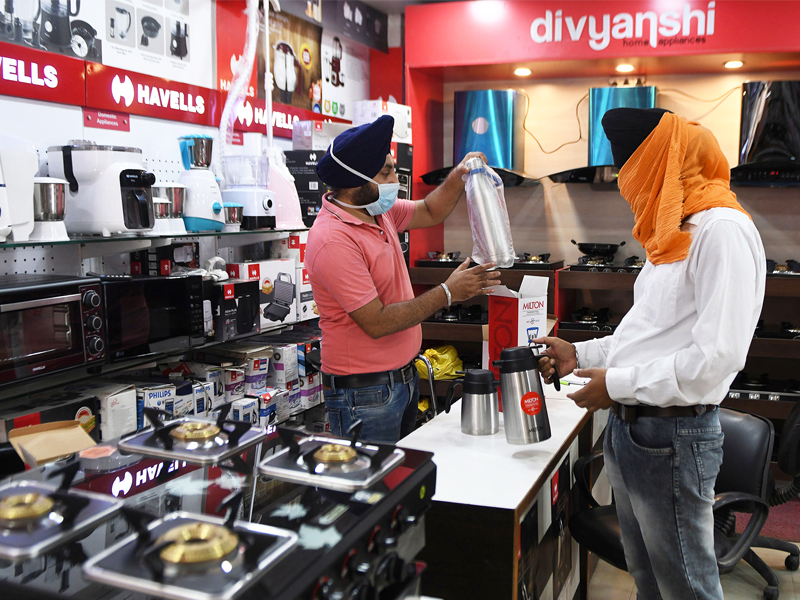 However, demand for bikes and small cars could pick up due to the shift from Ola-Uber due to Covid-19 concerns. The rabi season output was good, and April saw higher food prices due to supply side disruptions. “The rural economy is not under too much stress and can pick up quickly,” says Bajoria.

“The government’s intent is in the right direction… we have to see how the execution goes,” says Baliga. “I would not be surprised if we have deflationary growth for the year.” He expects India to see de-growth for the April to September period, after which growth might start to pick up. But this would largely be led through exports rather than domestic demand.

The government has done what it is good at: Show intent and provide support wherever it is necessary. But instead of doling out capital, it has opened up credit lines and created an atmosphere of empowering people, small businesses and corporates. These measures will work, but there is one rider—the hope that the Covid-19 storm blows over soon.

Tweets by @forbes_india
Episode 13: The increasing perils of being a minority in India
'Lockdown extension tested patience of migrant workers'