Exodus of the Far Away Brothers

Understanding the working life of a migrant worker, and why many are losing patience and heading home 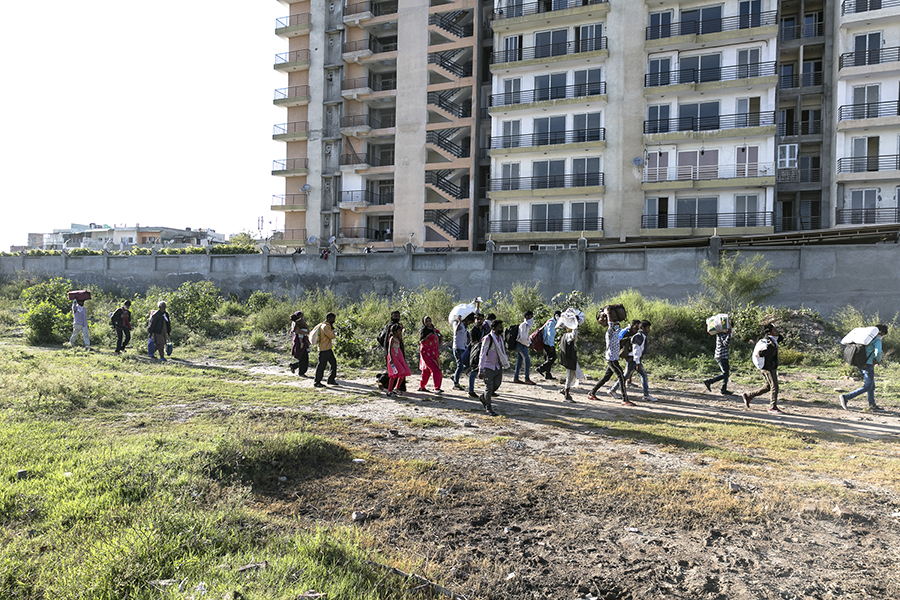 With their meagre belongings, migrants from Delhi on their long journey home to their villages in UP and Bihar walk, wait, run and dodge behind residential complexes adjoining the Delhi-UP highway near Ghaziabad to evade the police from turning them back. They’ve walked for hours across Delhi to get here and see no reason to turn back.​
Image: Madhu Kapparath

In a corner of a construction site in Mulund in the central suburbs of Mumbai, the Brihanmumbai Municipal Corporation (BMC) has restarted a project to expand the roads. A lean, diminutive man in brown pants and a red striped shirt, a fluorescent green safety jacket over it, is sitting under the shade of a tree while talking on his mobile phone—not a smart one, but the good old feature phone.

This is Bishu, a 24 year old, who is on a lunch break from his work of piling metal rods into the soil. Bishu hails from a small village in Maldah, 327 kilomteres north of Kolkata in West Bengal. He is a migrant labourer who works across the country, wherever his contractor sends him. These days, he is working in Mumbai, along with his younger brother who is at a construction site in Thane, nearby. While Bishu has been promised Rs 300 per day by his contractor, he hasn’t been paid for the past three months. “But I can’t complain as they have given me food and a place to stay, which many others don’t have. We just live nearby on that site,” shrugs Bishu, pointing to a shelter now hidden by the compound in front.   Bishu is the oldest son and the brothers are the only earning members of a family of five. They hope to go back once West Bengal opens borders for its residents. “There is no point for me to hang on a truck and be stuck in Odisha or Jharkhand waiting for when the border will open, so maybe when trains start and when they give me my payment, I will go home. But yes, I am going home the moment things open up.” Not everybody is as patient as Bishu. While reporting for this story, this reporter came across hundreds of daily-wage migrant workers walking for hours, trying to find trucks to go back to their mofussil land. There is work to be done in Mumbai—for private sector construction companies, too, but as Subodh C Dixit, executive director at Shapoorji Pallonji Engineering & Construction, told Forbes India: “Although organised players like Shapoorji Engineering were taking care of them, the lockdown extension tested their patience.”  The BMC has recommenced construction of some key projects, including road repairs, desilting and pre-monsoon work, with over 3,800 construction workers across the length and breadth of the city. Some of the marquee projects where construction has begun include the Mumbai Metro Project - Line 1, Line II and Line III, the Coastal Road project that connects South Mumbai to suburban Kandivili, and the Mumbai Trans Harbour Link, among others. Earlier this month, the state government had announced a 67 percent cut in its spending for development projects and expects to expend nearly Rs 1.15 lakh crore during this financial year; most of the key projects are backed by Japan International Cooperation Agency.  At a metro construction site in the central suburbs of the city, four men hold a heavy metal barricade to close the entry door of the site. A fifth is operating a crane, as the site engineer supervises the project and a watchman sits in a corner on a sunny Monday afternoon. “We start early and work for nearly six to eight hours. Some labourers have already left for their villages but we are working with as many people we have. While we do expect people to leave, we are hoping to finish pre-monsoon work before that,” explained the site engineer, on condition of anonymity. According to a spokesperson of the Shiv Sena, the party leading the alliance in the Maharashtra government, “A lot of labourers want to go back home  [but can’t]. At present, we are taking care of 5.5 lakh migrant workers, providing them with food, shelter and we are trying to facilitate trains for them to return home. We are also trying to bring back those stranded outside Maharashtra.” He added that the government is not expecting any labour shortage at this point in time and projects are being taken care of. Private players may not be in a position to make such claims. According to a report by Business Standard on March 16, 2019 construction majors Larsen & Toubro, Hindustan Construction Company, Reliance Infrastructure, Tata Projects Ltd, JKumar Infraprojects and Simplex Infrastructure together had an outstanding order book of Rs 3.95 lakh crore. Roughly a sixth of these orders are in Mumbai alone.  “We do not have any problems as most of our projects that were stopped,  including Metro work and coastal road project, have already started. Most of our work is in remote locations that have not been impacted,” said a person directly familiar with development at a listed construction firm mentioned above, who declined to be identified. He added that infrastructure projects may not bear the brunt as much as real estate developers as infrastructure projects are spread across the country; it is companies with lot of projects in cities which will be impacted. Dixit says his company is left with a strength of “30-60 percent at our projects”. While the country has lost nearly two months of labour, with the Kharif season in the offing, it is usually time for migrant workers to go back home to farm. After all, there are 146 million land holdings in India as per the 2015-16 Agricultural Census, of which 70 million (48 percent) are less than half a hectare. Even though farming only provides subsistence levels of existence, it is important at this time.

Activities like construction, which require masons, concrete workers and carpenters, are able to absorb tens of thousands of migrant labourers. These daily wage workers are hired by contractors who typically bring people from their own villages. “On any given day a contractor, is usually paid Rs 280 to Rs 400 per worker and around half of that goes to those working for him or her. However, the carpenter is the one who makes more money as measurements is a skilled job; the rest earn far lower rates,” says a senior construction executive. He explains that one of the reasons people move towards construction  is that they get to stay in free labour camps with food, and the contractor is someone they know well personally. Also, each site has multiple contracts as site managers do not like to depend on a sole supplier of labour, which can create labour migration. The pool is typically divided between migrant labourers from Jharkhand, Bihar, Uttar Pradesh and West Bengal.