Nowhere do the prospects seem brighter than in Russia's Far North, where rapidly rising temperatures have opened up a panoply of new possibilities, like mining and energy project 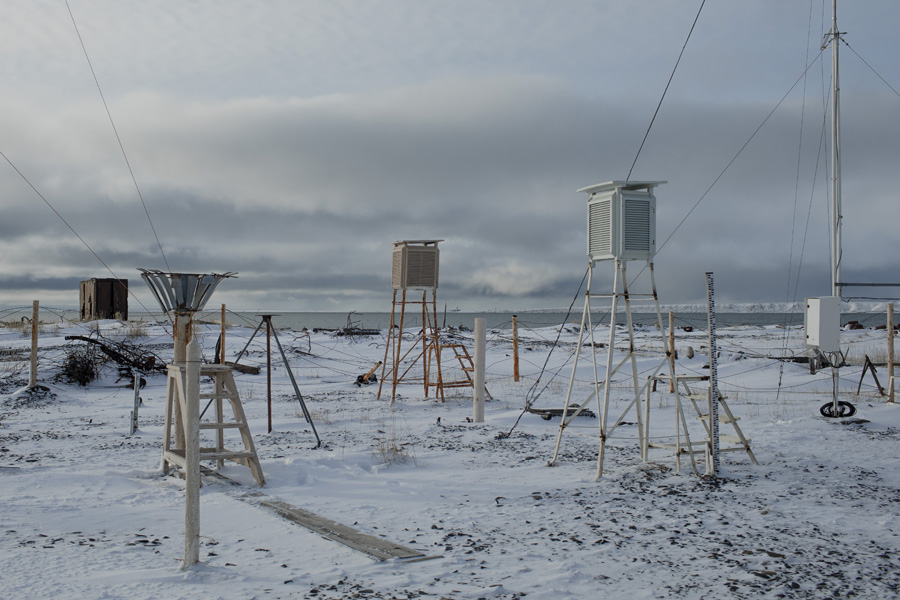 Instruments of the meteorological station in the port town of Pevek in Russia's Far North, Oct. 7, 2021. Global warming may pose grave dangers around the world, but as one tiny Russian town on the Arctic Ocean shows, it can also be a ticket to prosperity. (Emile Ducke/The New York Times)

PEVEK, Russia — A refurbished port. A spanking new plant to generate electricity. Repaved roads. And money left over to repair the library and put in a new esplanade along the shore of the Arctic Ocean.

Globally, the warming climate is a creeping disaster, threatening lives and livelihoods with floods, fires and droughts, and requiring tremendous effort and expenditure to combat.

But in Pevek, a small port town on the Arctic Ocean in Russia’s Far North capitalizing on a boom in Arctic shipping, the warming climate is seen as a barely mitigated bonanza.

“I would call it a rebirth,” said Valentina Khristoforova, a curator at a local history museum. “We are in a new era.”

While governments across the globe may be racing to head off the potentially catastrophic effects of climate change, the economics of global warming are playing out differently in Russia.

Arable land is expanding, with farmers planting corn in parts of Siberia where it never grew before. Winter heating bills are declining, and Russian fishermen have found a modest pollock catch in thawed areas of the Arctic Ocean near Alaska.

Nowhere do the prospects seem brighter than in Russia’s Far North, where rapidly rising temperatures have opened up a panoply of new possibilities, like mining and energy projects. Perhaps the most profound of these is the prospect, as early as next year, of year-round Arctic shipping with specially designed “ice class” container vessels, offering an alternative to the Suez Canal.

Across the Russian Arctic, a consortium of companies supported by the government is midway through a plan to invest 735 billion rubles (about $10 billion) over five years developing the Northeast Passage, a shipping lane between the Pacific and Atlantic that the Russians call the Northern Sea Route. They plan to attract shipping between Asia and Europe that now traverses the Suez Canal, and to enable mining, natural gas and tourism ventures.

The more the ice recedes, the more these business ideas make sense. The minimum summertime ice pack on the Arctic Ocean is about one-third less than the average in the 1980s, when monitoring began, researchers with the Colorado-based National Snow and Ice Data Center said last year. The ocean has lost nearly 1 million square miles of ice and is expected to be mostly ice-free in the summertime, even at the North Pole, by around mid-century.

Pevek is a key port on the eastern edge of this thawing sea. Before the big melt and its economic possibilities came into focus, it was an icy backwater, one of many dying outposts of the Soviet empire, well on their way to becoming ghost towns.

Past business plans for Pevek have failed pitiably. An effort to sell reindeer meat to Finland, for example, fell apart when Finnish inspectors rejected the product, said Raisa Tymoshenko, a reporter with the town newspaper, North Star.

Just a few years ago the town and its satellite communities were mostly abandoned. The population had fallen to about 3,000 from about 25,000 in Soviet times. “There were rumors the town would close,” Pavel Rozhkov, a resident, said.

But with global warming, the wheel of fortune turned, and the population has risen by about 1,500 people, vindicating, at least in one small pocket, the Kremlin’s strategy for adapting to change — spending where needed and profiting where possible.

The Kremlin is not blind to the drawbacks of global warming, acknowledging in a 2020 policy decree “the vulnerability of Russia’s population, economy and natural resources to the consequences of climate change.”

Global warming, the plan noted, will require costly adaptations. The government will have to cut firebreaks in forests newly vulnerable to wildfires, reinforce dams against river flooding, rebuild housing collapsing into melting permafrost, and brace for possible lower world demand for oil and natural gas.

Rosatom, the Russian state nuclear company that is coordinating investment in the shipping lane, said the initiative benefits from climate change but will also help fight it by reducing emissions from ships sailing between Europe and Asia by 23%, compared with the much longer Suez route.

The trip from Busan, in South Korea, to Amsterdam, for example, is 13 days shorter over the Northern Sea Route — a significant savings in time and fuel.

Money has been pouring in for Arctic projects. Rosatom in July signed a deal with DP World, the Dubai-based ports and logistics company, to develop ports and a fleet of ice-class container ships with specially reinforced hulls to navigate icy seas.

The thawing ocean has also made oil, natural gas and mining ventures more profitable, reducing the costs of shipping supplies in and products out. A multibillion-dollar joint venture of the Russian company Novatek, Total of France, CNPC of China and other investors now exports about 5% of all liquefied natural gas traded globally over the thawing Arctic Ocean.

Overall, analysts say, at least half a dozen large Russian companies in energy, shipping and mining will benefit from global warming.