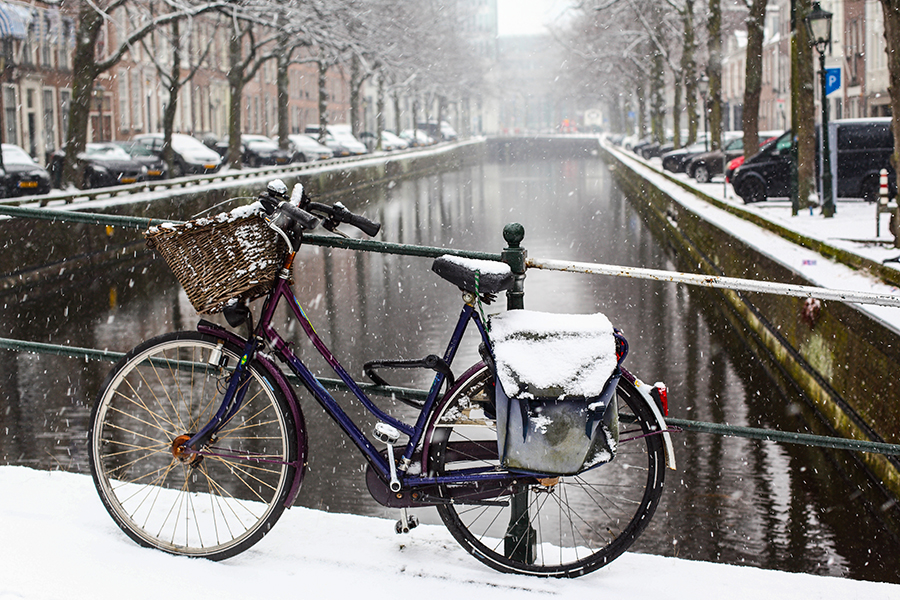 City cyclists may be put off by snow and rain but not necessarily everywhere.
Image: Patrick Messier / Shutterstock

Recent research gives some insight into the behavior of cyclists when faced with bad weather. Not surprisingly, they prefer to ride when it's neither too hot nor too cold. But even in the rain and cold, some cyclists aren't put off, although this can depend on the local climate and the infrastructure available to them. In the long run, rising temperatures and the effects of climate disruption could change the situation.

The most significant variable regarding bikeshare use is time of day, followed by precipitation level, according to a study published in the Journal of Transport Geography titled "How does weather affect bikeshare use?" by Richard Bean, Dorina Pojani and Jonathan Corcoran of the University of Queenland who detailed their research in an article in The Conversation entitled "We analysed 100 million bike trips to reveal where in the world cyclists are most likely to brave rain and cold."

It was found that, in most cases, bikeshare use increases on weekdays and weekends up to a point when the temperature reaches 27 or 28 degrees, before declining. In addition to temperature, precipitation levels also have a direct effect on bikeshare use.

Bad weather affects people's willingness to cycle in different ways in different climate zones. For example, people in Melbourne, Chicago and Vancouver are more likely to stop cycling when faced with heavy rain, unlike people in Dublin. Even during the rainiest hours of the year, Ireland's capital has a usage rate of 81% of the usual rate for the rest of the year. This is much higher than anywhere else, where this figure tends to drop as you head south. In Melbourne, for example, it is only 46%, which means that more than half of the city's bikeshare users refuse to ride when it rains heavily.

In addition to the local climate, other factors can influence whether or not cyclists are willing to ride in the rain, starting with the quality of the infrastructure. In order to encourage cycling, even in bad weather, it is therefore necessary to develop weather-resistant paths that are effectively separated from motor vehicles.

Note that the study also reveals that women are more easily discouraged by bad weather like rain or, worse still, snow. This was notably observed in New York and Chicago, but since not all operators record the gender of their subscribers, it isn't necessarily indicative of a broader trend.

In fact, weather conditions have a direct impact on traffic congestion, but also, by extension, on CO2 emissions and air pollution. The predicted effects of climate change, with a likely increase in temperatures and heavy rainfall, will not be without repercussions. The use of bikeshare services is expected to increase slightly in colder climates and decrease slightly in warmer areas.

The study examined the effect of weather on bikeshare use. It took into account data from 40 public bike-sharing programs located in as many cities, spread across 16 countries, in five different climate zones. In total, nearly 100 million bicycle trips over the past eight years were analyzed for the research.