For the 24-year-old Ugandan activist, climate change is an issue of inequality and injustice 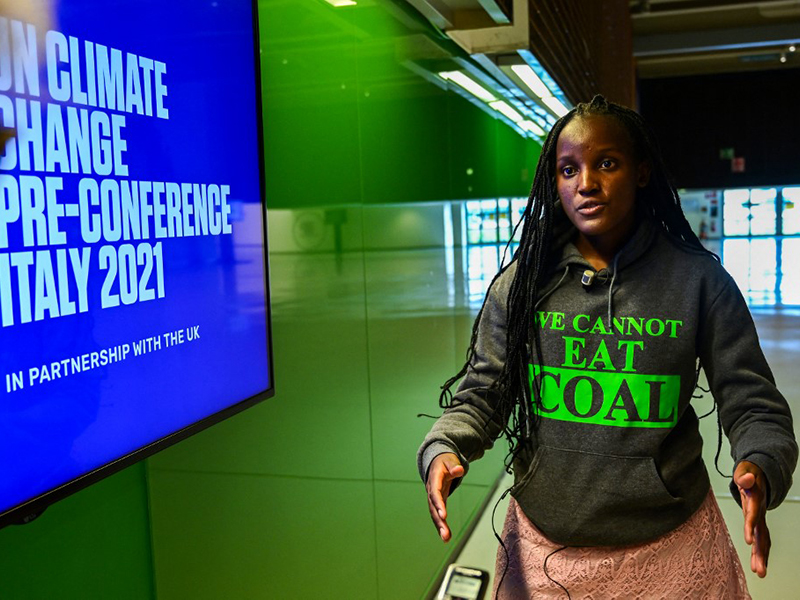 For Vanessa Nakate, climate change is at its heart an issue of inequality and injustice.
Image: Miguel Medina / AFP

Vanessa Nakate, a 24-year-old Ugandan activist who campaigns for climate justice for vulnerable communities is helping to spread the demands of developing nations with her simple but effective slogan: "We cannot eat coal".

The maxim is designed to call out the seemingly insatiable investment from governments and corporations in the very fossil fuels science says must become obsolete in order to stave off climate disaster.

"There are so many things I would love to do, but I think it would be stopping investments in fossil fuels projects, because we cannot eat coal, we cannot drink oil, we cannot breathe gas," she told AFP on the sidelines of a youth climate summit in Milan this week.

"If someone really cared about the lives of the communities, the people who are facing the worst of the climate crisis, then true leadership would be stopping investment in fossil fuels projects."

For Nakate, climate change is at its heart an issue of inequality and injustice.

The vast majority of planet-warming carbon emissions have been pumped out by just a handful of rich emitters.

Conversely, it is vulnerable communities in the developing world—particularly in Africa and Southeast Asia—which are already grappling with the extreme flooding, drought and storms supercharged by global heating.

"The people and communities the least responsible for the rise in global emissions are facing the worst of the climate crisis right now," she said.

Nakate, a business management graduate, has taken matters into her own hands, using her Rise Up Movement to launch the "Vash Green Schools" project to install solar panels and green ovens in rural schools to replace traditional—but planet-unfriendly—wood-fired stoves.

But she admits the project is but a drop in the ocean in terms of what is needed, and Nakate believes nations that got rich off of oil, gas and coal, should pay countries that are blameless for climate change to green their grids.

In addition, she is calling for a dedicated funding mechanism for climate "loss and damage", which is likely to be a key debate at the forthcoming COP26 UN climate summit in Glasgow.

She admits to being "overwhelmed" by the attention she receives at climate gatherings (at the Milan event she was the second attraction after only Greta Thunberg).

But back home in Uganda she is able to go back to being "more or less unrecognisable", which she says she prefers.

Despite the dire warnings from scientists and the lack of action from world leaders to address global warming, Nakate says she is optimistic about the future.

"It's hope that really drives me to keep demanding for climate justice," she said.

"If there were no hope, then I don't think I would be doing it."

Tweets by @forbesindia
A 'pacemaker for the brain': No treatment helped her depression—until this
First Russian film in space an 'experiment': Director Klim Shipenko