Why the upheaval in Kazakhstan could rattle energy markets

Kazakhstan, where violent protests against the government have been raging, has some of the largest oil fields on earth and more than 40% of the world's uranium production 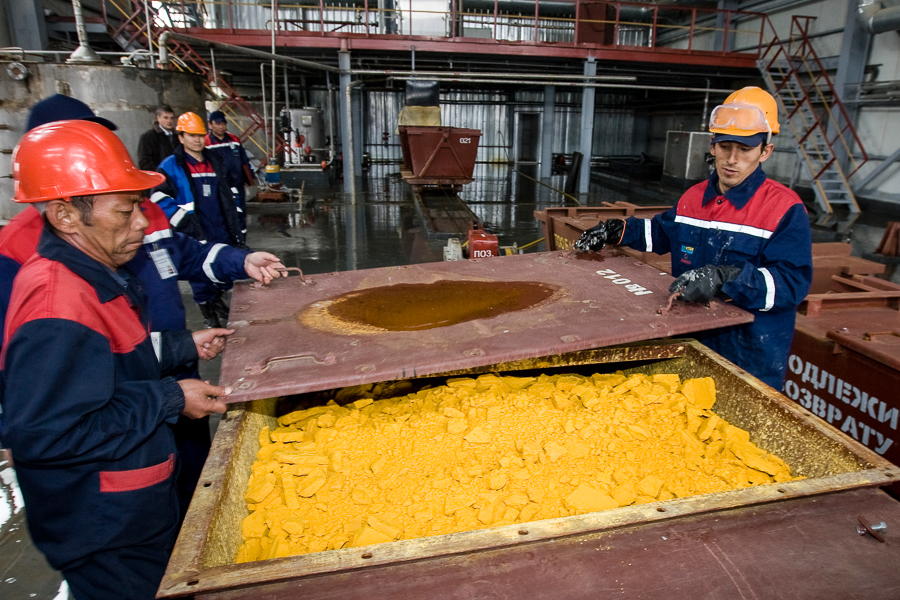 A file photo of a container of uranium oxide at the Khorasan-1 uranium mine in southern Kazakhstan.
Image: Shamil Zhumatov / Reuters

Kazakhstan, where violent protests against the government have been raging, has some of the largest oil fields on earth and more than 40% of the world’s uranium production.

So far the unrest does not seem to have cut into production of either oil or uranium, but it has the potential to ripple through critical energy markets.

Uranium prices, which have risen in recent months on hopes of a revival of the nuclear industry to combat climate change, rose 8% Wednesday amid reports of clashes in the Central Asian country. Some 22% of the uranium purchased by nuclear plants in the United States in 2020 came from Kazakhstan, according to U.S. government statistics.

“Without Kazakhstan right now, the world would not be anywhere near well-supplied for uranium,” said Jonathan Hinze, president of UxC, which tracks the market, though he noted that utilities buy the fuel with long lead times.

Any drop in oil output from Kazakhstan, which produces about 2% of world supplies, would also likely be felt in an already tight market. Some oil producers are not meeting the quotas allocated to them under agreements by the so-called OPEC Plus producers group.

Kazakhstan, a member of the group, has been substantially exceeding its quota and is one of the few producers that looked likely to be able to increase output in the coming months.

“This is the sort of supply risk that has not been on anybody’s radar screen,” said Bill Farren-Price, director for intelligence at Enverus, an energy research firm. He added that oil analysts had mostly focused on problems elsewhere, including tensions between Saudi Arabia and Iran, and recent cuts in production in Libya because of political turmoil.

Since becoming independent with the fall of the Soviet Union three decades ago, Kazakhstan has been a magnet for Western energy investment. The Tengiz oil field, in the western part of the country near the Caspian Sea, is one of the world’s largest. Chevron and Exxon Mobil, the two largest American oil companies, are in the midst of an estimated $37 billion expansion at Tengiz field, which is a critical source of earnings for Chevron.

Exxon, Shell, France’s Total, and Italy’s Eni are all shareholders in another huge field called Kashagan in the Caspian.

These fields have helped make Kazakhstan a substantial oil producer, pumping about 1.6 million barrels a day (more than Nigeria, comparable to Mexico) and one of the few that is growing. The oil operations are also a crucial source of revenue for the Kazakh government.

The fields are in remote areas, but oil workers have demonstrated at the Chevron-operated Tengiz field in sympathy with the protests.

“A number of contractor employees are gathered at the Tengiz field in support of protests taking place across Kazakhstan,” said a statement Thursday from Tengizchevroil, the Chevron-led joint venture in the country. It added, “Production operations continue.”

Farren-Price said that the locations of these fields would tend to insulate them from disruption. But if the unrest gains momentum, he said, the oil companies might encounter operating problems, like difficulties moving people and supplies in and out of the sites.

The widespread disorder could also hurt Kazakhstan’s prospects for investment and credit.

In a comment Thursday, Standard & Poor’s, the credit rating group, attributed the civil unrest to what it called “structural weaknesses” in Kazakhstan’s institutions. The agency said that government policy was subject to what it called “succession risk,” with longtime leader Nursultan Nazarbayev having been succeeded by another strongman, President Kassym-Jomart Tokayev, in 2019, and noted that “perceived corruption is high.”