CATL already supplies batteries to almost all of the world's automakers, including GM, Volkswagen, BMW and Tesla and has emerged as one of the biggest winners of the electric car boom, along with Tesla

By Keith Bradsher and Michael Forsythe 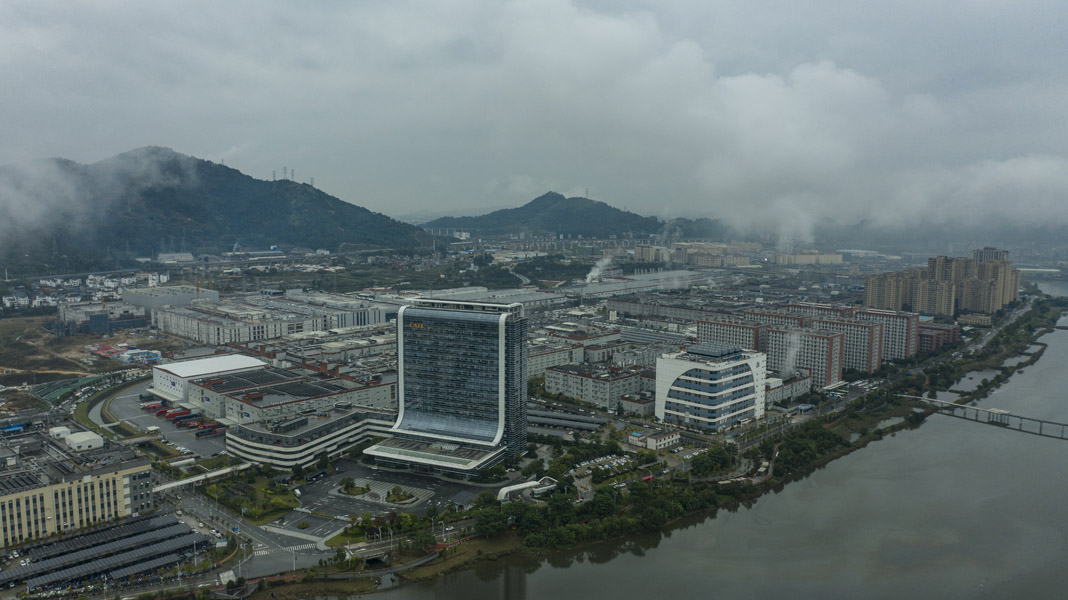 The lithium battery-shaped headquarters of CATL, a leading maker of electric car batteries, in Ningde, China, Nov. 17, 2021. Beijing gave CATL lavish subsidies, a captive market of buyers and soft regulatory treatment, helping it to control a crucial technology of the future. It is now worth more than General Motors and Ford combined. (Qilai Shen/The New York Times)

NINGDE, China — As the global pandemic hit, the world’s biggest maker of electric car batteries, a Chinese company now worth more than General Motors and Ford combined, suddenly faced its own crisis.

A rival had released a video suggesting that a technology used by the company, CATL, and other manufacturers could cause car fires. Imitating a Chinese government safety test, the rival had driven a nail through a battery cell, one of many in a typical electric car battery. The cell exploded in a fireball.

Chinese officials took swift action — by dropping the nail test, according to documents reviewed by The New York Times. The new regulation, released two months later, listed who had drafted it: First on the list, ahead of the government’s own vehicle testing agency, was CATL.

The shift did not expose the world to unsafe batteries — other countries do not require a nail test — but it showed China’s commitment to nurturing a corporate champion with a strong and growing sway over the future of driving. CATL has given China a commanding lead in electric car batteries, a technology central to the broader green revolution. The company already supplies batteries to almost all of the world’s automakers, including GM, Volkswagen, BMW and Tesla. CATL has emerged as one of the biggest winners of the electric car boom, along with Tesla.

The battery giant stands as a crucial link in a green-technology supply chain increasingly dominated by China. Chinese companies, particularly CATL, have secured vast supplies of the raw materials that go inside the batteries. That dominance has stirred fears in Washington that Detroit could someday be rendered obsolete and that Beijing could control American driving in the 21st century the way that oil-producing nations sometimes could in the 20th.

Chinese government officials made sure CATL’s business stayed in Chinese hands. They created a captive market of battery customers. And when CATL needed money, they doled it out.

“CATL definitely seems like it’s the concept and creation of a master plan,” said Michael Dunne, a former GM executive in Asia and now an analyst.

CATL isn’t government-owned, according to its filings, but investors with connections to Beijing have held stakes during its rise, according to a Times analysis of its filings. So did a Chinese investment firm that counted Hunter Biden, son of President Joe Biden, as a board member and shareholder.

From Detroit to Milan to Wolfsburg, Germany, auto executives who spent their careers trying to perfect pistons and fuel-injection systems are now obsessing about how to compete with a nearly invisible yet formidable industry giant.

“China’s problem with internal combustion engines was they were forever playing the game of catch-up,” said Bill Russo, a former chief of Chrysler in China who is now a Shanghai electric car consultant. “Now, the United States has to play the game of catch-up with electric vehicles.”

Out of the shadows

While Tesla and its garrulous chairman, Elon Musk, have epitomized the electric car boom, CATL — its legal name in English is Contemporary Amperex Technology Co. Ltd. — has stayed in the shadows.

Its founder and chairman, Robin Zeng, is one of the wealthiest men in Asia, with a fortune of about $60 billion. Its towering headquarters, shaped like an oversize lithium battery, and several of its biggest factories are in his hometown, Ningde, a former fishing village and military base in southeastern China. The municipal government has locked down access to a wide array of documents, particularly from the early days of CATL.

After studying marine engineering at a Shanghai university, Zeng went to work on battery chemistry for TDK, a Japanese company, in China. In 1999, he joined fellow battery chemistry experts who set up their own company supplying lithium-cobalt batteries for mobile phones, camcorders and other portable consumer electronics. The team sold the company to TDK in 2005 for $100 million and continued to run it as a subsidiary.

The Chinese government, which has long identified batteries as a strategic industry, in 2011 took one of several steps to nurture a homegrown industry. It required that foreign automakers that want to sell electric cars in China transfer crucial technology to a local company. Only then would the government subsidize the sale of their autos, which could amount to up to $19,300 for car buyers.

TDK allowed a group of Chinese investors led by Zeng to acquire an 85% stake in its nascent electric car battery business at the end of 2011. They called it CATL. BMW, its first main customer, switched from A123, a battery supplier in Massachusetts and Michigan.

The financial terms of the sale aren’t clear, but Zeng and his partners reaped a windfall. TDK now has a market capitalization of $16 billion. CATL? Almost $240 billion.

TDK referred questions to CATL, which, in turn, said only TDK could discuss how much had been paid.

CATL’s batteries require ready supplies of lithium and cobalt. Chinese firms have rushed to secure cobalt in places like Congo, where huge deposits were once mined by an American company. This year, CATL acquired a quarter of the Kisanfu cobalt reserve, one of the world’s richest, in Congo for $137.5 million.

Corporate records show that within a year of setting up CATL, Zeng had started a subsidiary in western China’s Qinghai province. Qinghai had something that Zeng needed: dried-out salt lake beds with thick underground brine laden with lithium. The government wanted development in the country’s poorer western regions. CATL locked in contracts for the most lithium-rich deposits, people familiar with the company said.

The Chinese government helped. In 2015, it unveiled the Made in China 2025 plan, a guide to achieving independence in major industries of the future, including electric cars, in a decade.

Chinese policy banks, which lend to government-endorsed projects that may be too risky for local banks, stepped in to provide more than $100 million to CATL projects in Qinghai, documents show. The provincial government of Qinghai offered roughly $33 million from 2015 through 2017, CATL filings showed. The Qinghai government did not respond to requests for comment.

In a written reply to questions, CATL said its investments “guarantee the stability of raw material supply, and avoid sharp price fluctuations.”

With subsidies and a protected home market, CATL became extremely profitable. The auto industry considers after-tax profit margins of at least 5% of sales a success. CATL’s margin last year was 11.1%. Despite that profitability, the company continued to collect government subsidies last year equal to a fifth of its net income.

The effort has also made China a giant in electric car batteries. China has 14 times the electric car battery-making capacity of the United States, according to Benchmark Mineral Intelligence, a London consulting firm. It projects that China will keep the lead even after a U.S. buildup, including projects like the planned North Carolina plant announced in early December by Toyota, and would have seven times the United States’ capacity in four years.

CATL’s initial public offering in 2018 made Zeng and two CATL vice chairmen, who together own a 40% stake, rich. Other early investors, some with deep political connections, did well, too.

An even earlier investor in CATL was a Chinese private equity company connected to Hunter Biden.

Biden left BHR’s board in April 2020, according to Chinese corporate records, and no longer has any ownership interest in BHR, Chris Clark, his lawyer, said.

It isn’t clear what, if anything, Biden gained from the CATL deal, and Clark declined to comment further. Another BHR board member — who, like Biden, controlled a 10% stake in the firm — received a payout of about $230,000 from the deal, said the board member, who asked not to be identified in order to discuss internal business. Jonathan Li, BHR’s chief executive, didn’t respond to phone calls and emailed questions.

When asked about the investments, CATL referred to its IPO prospectus, saying, “All investors acquired their shares based on common rules for private equity fundraising activities.”

Help with a fire

CATL holds one-third of the global electric-car-battery market. Its biggest rival globally is LG, with a one-quarter share. At one time, CATL also faced a tough rival at home.

BYD, based in the city of Shenzhen, boasted a big-name backer, investor Warren Buffett. Unlike CATL, which has invested heavily in lithium-cobalt batteries, BYD bet on traditional lithium batteries.

Last year, BYD questioned the safety of cobalt batteries. It produced the video of a test resembling one used by Chinese regulators until recently to determine the safety of a battery cell by pounding a nail through it.

BYD declined to identify the manufacturer. The cell’s lithium-cobalt chemistry was similar to that used by CATL as well as South Korean companies.

Chinese regulators have not responded to requests for comment about why they dropped the nail test two months later. They replaced it with a test of whether an entire battery can contain a fire for five minutes — similar to what other countries do. CATL said that what counts is the safety provided by its entire battery system.

For now, CATL is building a vast factory more than three times the size of Tesla and Panasonic’s electric car battery gigafactory in the Nevada desert. CATL’s giant factory in Fuding, a 90-minute drive northeast of downtown Ningde, is one of eight that CATL now has under construction, at a cost of more than $14 billion. The company has mustered small armies of construction workers to put up 50-foot-high, steel-walled buildings longer than five football fields.

Yu Bin, a cement worker in Fuding, said he had worked 20 hours straight recently to finish a roof. “The lights on the cranes,” he said, “lit up the night.”

Tweets by @forbesindia
You've got mail: Wake up, and start your Jurni
Omicron infections seem to be milder, three research teams report