The Russian president's window for an invasion is limited, dictated by temperatures that will freeze the ground before a spring thaw, which could begin by March, creating a muddy quagmire 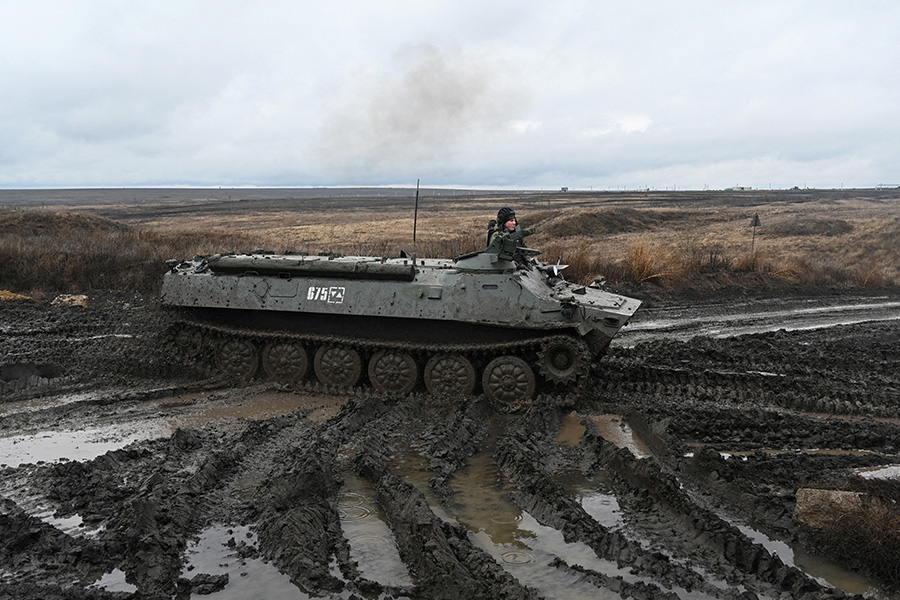 As long as the ground remains muddy, senior administration officials said, Putin might be forced to push back a ground offensive until February at the earliest

WASHINGTON — The number of Russian troops at Ukraine’s border has remained steady in recent weeks, despite U.S. intelligence predictions of a surge, but U.S. officials say that President Vladimir Putin has begun taking steps to move military helicopters into place, a possible sign that planning for an attack continues.

U.S. officials had expected additional Russian troops to stream toward the Ukrainian border in December and early January, building toward a force of 175,000.

While troop movements have slowed, there are still 100,000 military personnel near the border and now the Russians have positioned additional attack aircraft there, U.S. officials said. Attack and transport helicopters, along with ground attack fighter jets, would be a critical Russian advantage, should Putin decide to invade Ukraine.

U.S. officials say the Russian president’s window for an invasion is limited, dictated by temperatures that will freeze the ground — allowing for the easy movement of heavy vehicles and equipment — before a spring thaw, which could begin by March, creates a muddy quagmire.

But a relatively mild winter has slowed the ground’s freezing, and Putin’s deadline for committing his forces has slipped further toward the spring, officials say. The hard winter freeze that typically comes to Ukraine by January has not happened in many areas of the country. As long as the ground remains muddy, senior administration officials said, Putin might be forced to push back a ground offensive until February at the earliest. n

To get a better sense of possible conditions this year, the Biden administration has enlisted meteorologists to look more closely at the likely weather in Ukraine in the coming weeks, according to a U.S. official.

The officials interviewed for this article requested anonymity to discuss sensitive and classified assessments of Russian military movements, along with American efforts to learn about those deployments.

The United States has been regularly flying Air Force RC-135 Rivet Joint electronic-eavesdropping planes over Ukraine since Dec. 27. The planes allow U.S. intelligence operatives to listen to Russian ground commanders’ communications. The Air Force is also flying E-8 JSTARS ground-surveillance planes to track the Russian troop buildup and the movements of the forces.

The United States is particularly interested in indications that Russia may deploy any of its tactical nuclear weapons to the border, a move that Russian officials have suggested could be an option.

The intelligence agencies have told administration officials that while the Russians have continued planning an invasion, they do not believe Putin has decided whether to begin an incursion. For their part, Russian officials reiterated on Monday that they do not plan to invade Ukraine.

A fierce diplomatic push to give Putin face-saving alternatives to military action began this week in Geneva, where Deputy Secretary of State Wendy Sherman led a U.S. delegation for talks with her Russian counterpart, Sergei A. Ryabkov, and other Russian officials.

But Secretary of State Antony Blinken told reporters at the State Department on Friday that “actual progress is going to be very difficult to make, if not impossible, in an environment of escalation by Russia.” And after eight hours of meetings with the Russians, Sherman told reporters that such de-escalation had not occurred and that the talks had amounted merely to “a discussion, a better understanding of each other and each other’s priorities.”

Putin has made several demands, including that NATO formally pledge never to admit Ukraine and Georgia as members, that U.S. and NATO officials call nonstarters. Instead, the United States is dangling more modest offers, like assurances that U.S. missiles will not be placed in Ukrainian territory — something Washington has never seriously contemplated.

Despite publicly expressing uncertainty about Putin’s intentions, U.S. officials have assessed that there is little likelihood that he will back down from what they have described as maximalist positions. The Biden administration has promised allies that it will not make any offers to Russia that they do not support, taking off the table any sort of unilateral troop withdrawal from Eastern Europe or pledge not to further integrate Ukraine with the rest of Europe.

Putin has massed his forces along Russia’s border with eastern Ukraine, where for nearly eight years he has supported a pro-Russian insurgency in the Donbas region that has left up to 14,000 people dead.

In addition to building up aviation assets, the Russian government has ordered in more units specializing in logistics. While aviation assets would be critical to protecting ground troops during the invasion, the logistics units would be needed to support the ground forces in the event Putin orders his forces across the border.

Pentagon officials have warned their Russian counterparts that they need to de-escalate the situation, because an invasion would not end well for Moscow. Gen. Mark Milley, the chairman of the Joint Chiefs of Staff, spoke bluntly to Gen. Valery Gerasimov, Russia’s chief of the general staff, on Dec. 22. Defense Secretary Lloyd Austin followed that with more diplomatic comments to Russia’s defense minister, Sergei K. Shoigu, on Thursday.

On Monday, Milley spoke with his Ukrainian counterpart, Lt. Gen. Valery Zaluzhny, about the Russian troop presence and the security situation.

There is still no consensus within the administration, much less the alliance, on how or when to support an insurgency in Ukraine should Russia conduct a full-scale invasion, expand its presence in the Donbas region or some other scenario, according to a senior administration official. Officials in the Biden administration are intensely debating what the available options might be depending on which situations play out.

Tweets by @forbesindia
Career management 4.0: The hybrid workplace edition for Industry 4.0
In a first, man receives a heart from a genetically altered pig