In a first, man receives a heart from a genetically altered pig

Scientists have worked feverishly to develop pigs whose organs would not be rejected by the human body, research accelerated in the past decade by new gene editing and cloning technologies 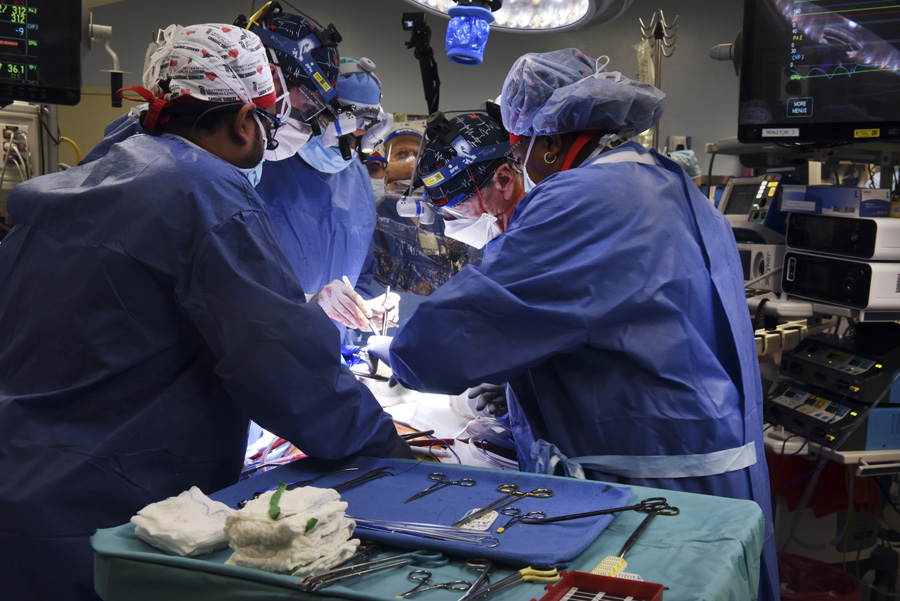 A 57-year-old man with life-threatening heart disease has received a heart from a genetically modified pig, a groundbreaking procedure that offers hope to hundreds of thousands of patients with failing organs.

It is the first successful transplant of a pig’s heart into a human being. The eight-hour operation took place in Baltimore on Friday, and the patient, David Bennett Sr. of Maryland, was doing well Monday, according to surgeons at the University of Maryland Medical Center.

“It creates the pulse; it creates the pressure; it is his heart,” said Dr. Bartley Griffith, director of the cardiac transplant program at the medical center, who performed the operation.

“It’s working, and it looks normal. We are thrilled, but we don’t know what tomorrow will bring us. This has never been done before.”

Last year, some 41,354 Americans received a transplanted organ, more than half of them receiving kidneys, according to the United Network for Organ Sharing, a nonprofit that coordinates the nation’s organ procurement efforts.

But there is an acute shortage of organs, and about a dozen people on the lists die each day. Some 3,817 Americans received human donor hearts last year as replacements, more than ever before, but the potential demand is still higher.

Scientists have worked feverishly to develop pigs whose organs would not be rejected by the human body, research accelerated in the past decade by new gene editing and cloning technologies. The heart transplant comes just months after surgeons in New York successfully attached the kidney of a genetically engineered pig to a brain-dead person.

Researchers hope procedures like this will usher in a new era in medicine in the future when replacement organs are no longer in short supply for the more than half a million Americans who are waiting for kidneys and other organs.

“This is a watershed event,” said Dr. David Klassen, chief medical officer of the United Network for Organ Sharing and a transplant physician. “Doors are starting to open that will lead, I believe, to major changes in how we treat organ failure.”

But he added that there were many hurdles to overcome before such a procedure could be broadly applied, noting that rejection of organs occurs even when a well-matched human donor kidney is transplanted.

“Events like these can be dramatized in the press, and it’s important to maintain perspective,” Klassen said. “It takes a long time to mature a therapy like this.”

Bennett decided to gamble on the experimental treatment because he would have died without a new heart, had exhausted other treatments and was too sick to qualify for a human donor heart, family members and doctors said.

His prognosis is uncertain. Bennett is still connected to a heart-lung bypass machine, which was keeping him alive before the operation, but that is not unusual for a new heart transplant recipient, experts said.

The new heart is functioning and already doing most of the work, and his doctors said he could be taken off the machine Tuesday. Bennett is being closely monitored for signs that his body is rejecting the new organ, but the first 48 hours, which are critical, passed without incident.

He is also being monitored for infections, including porcine retrovirus, a pig virus that may be transmitted to humans, although the risk is considered low.

“It was either die or do this transplant,” Bennett said before the surgery, according to officials at the University of Maryland Medical Center. “I want to live. I know it’s a shot in the dark, but it’s my last choice.”

Xenotransplantation, the process of grafting or transplanting organs or tissues from animals to humans, has a long history. Efforts to use the blood and skin of animals go back hundreds of years.

In the 1960s, chimpanzee kidneys were transplanted into some human patients, but the longest a recipient lived was nine months. In 1983, a baboon heart was transplanted into an infant known as Baby Fae, but she died 20 days later.

Pigs offer advantages over primates for organ procurements because they are easier to raise and achieve adult human size in six months. Pig heart valves are routinely transplanted into humans, and some patients with diabetes have received porcine pancreas cells. Pig skin has also been used as a temporary graft for burn patients.

Two newer technologies — gene editing and cloning — have yielded genetically altered pig organs less likely to be rejected by humans. Pig hearts have been transplanted successfully into baboons by Dr. Muhammad Mohiuddin, a professor of surgery at University of Maryland School of Medicine who established the cardiac xenotransplantation program with Griffith and is its scientific director. But safety concerns and fear of setting off a dangerous immune response that can be life-threatening precluded their use in humans until recently.

The heart transplanted into Bennett came from a genetically altered pig provided by Revivicor, a regenerative medicine company based in Blacksburg, Virginia.

The pig had 10 genetic modifications. Four genes were knocked out, or inactivated, including one that encodes a molecule that causes an aggressive human rejection response.

A growth gene was also inactivated to prevent the pig’s heart from continuing to grow after it was implanted, said Mohiuddin, who, with Griffith, did much of the research leading up to the transplant.

In addition, six human genes were inserted into the genome of the donor pig — modifications designed to make the porcine organs more tolerable to the human immune system.

The team used a new experimental drug developed in part by Mohiuddin and made by Kiniksa Pharmaceuticals to suppress the immune system and prevent rejection. It also used a new machine perfusion device to keep the pig’s heart preserved until surgery.

The Food and Drug Administration worked intensely toward the end of the year, finally giving the transplant surgeons an emergency authorization for the operation on New Year's Eve.

The surgeons encountered a number of unexpected turns.

“The anatomy was a little squirrelly, and we had a few moments of ‘uh-oh’ and had to do some clever plastic surgery to make everything fit,” Griffith said. As the team removed the clamp restricting blood supply to the organ, “the heart fired right up,” and “the animal heart began to squeeze.”

Tweets by @forbesindia
Russia positioning helicopters, in possible sign of Ukraine plans
Storyboard18 - The rise of 'key opinion leaders' in the celebrity vs creator battle