Hosting the Olympics is costly. For China, it's worth every billion

With the 2022 Winter Olympics, China is hoping to nurture an abiding interest in skiing, curling, ice hockey and other winter sports that could increase consumer spending, particularly in the country's chilly and economically struggling northeast 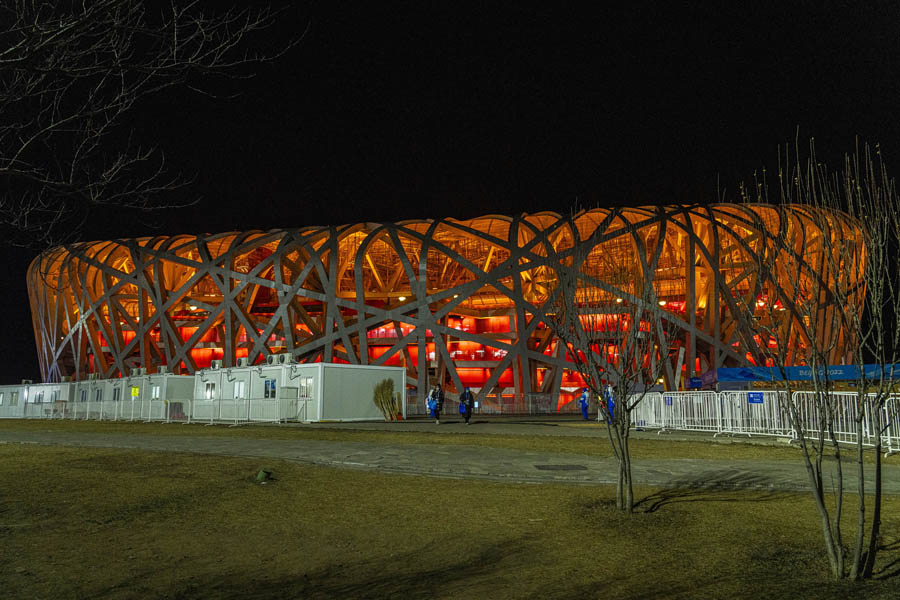 China’s National Stadium in Beijing, on Feb. 4, 2022, which was built ahead of the 2008 Summer Olympic Games and is being used again. For many cities, the Games make no economic sense, but national pride and an enthusiasm for building transportation infrastructure change the equation for Beijing. (Hiroko Masuike/The New York Times)

ZHANGJIAKOU, China — To make an Olympic ski jump, China clad a hillside in steel and blanketed it with artificial snow. To construct a high-speed rail line linking the venues and Beijing, engineers blasted tunnels through the surrounding mountains. And to keep the coronavirus at bay, workers are conducting tens of thousands of PCR tests on Games participants every day.

Hosting the Winter Olympics is costing China billions of dollars, a scale of expenditure that has made the event less appealing to many cities around the world in recent years. More and more of them have concluded that the Games are not worth being left with a hefty bill, white elephant stadiums, and fewer benefits from tourism than they had hoped.

But China looks at the Games with a different calculus. Beijing has long relied on heavy investments in building railway lines, highways and other infrastructure to provide millions of jobs to its citizens and reduce transportation costs. With the 2022 Games, it also hopes to nurture an abiding interest in skiing, curling, ice hockey and other winter sports that could increase consumer spending, particularly in the country’s chilly and economically struggling northeast.

Perhaps most important of all to China’s leader, Xi Jinping, the Olympics are a chance to demonstrate to the world his country’s unity and confidence under his leadership.

“For China’s international image, prestige, and face, as the Chinese would say, nothing is too expensive,” said Jean-Pierre Cabestan, a political scientist at Hong Kong Baptist University.

Still, with China’s economy already slowing, and a dimming outlook for global growth, as well as concerns that the omicron variant of the coronavirus would lead to more shutdowns and choking of global supply chains, Beijing has been wary of spiraling costs. Even Xi acknowledged the event had to be streamlined, saying last year that the aim was to hold a “simple, safe, splendid” event.

Practically every Olympic Games in recent years has triggered disputes over cost overruns. A study at Oxford University had found that the operating costs of Olympics held since 1960 have averaged nearly three times what the host cities originally bid.

The city of Sochi in Russia, which hosted the Winter Olympics in 2014, spent and invested more than $50 billion — half of which was on infrastructure. When Beijing hosted the Summer Olympics in 2008, it said it had spent $6.8 billion, but that did not include the tens of billions more it used to build roads, stadiums, subway lines and an airport terminal.

This time, China has set a budget of about $3 billion, a figure that includes the building of competition venues, but not projects like a $1 billion high-speed rail line and a $5 billion expressway.

The pandemic is making the Games even more expensive. The bill for last summer’s Olympics in Tokyo included $2.8 billion in coronavirus prevention costs alone. China’s “zero COVID” strategy, which focuses on eradicating outbreaks, has meant infection control measures are much more elaborate.

China’s concerns about the pandemic have dashed hopes that the Games would draw tourists. Organizers said last autumn that they would not sell tickets to foreign spectators. Then they announced last month that most Chinese residents would not get to go either, prompting a last-minute rush by hotel managers in Beijing to cut drastically the high room rates they had set for February.

Despite these difficulties, Chinese authorities have insisted that they have stayed within the operating budget.

Officials have said the lack of spectators has meant fewer employees are needed at the Games. China also saved money by canceling a welcoming ceremony for foreign visitors and shortening the torch relay to just three days, the Beijing organizing committee said in an emailed reply to questions. Beijing has also been able to reuse competition venues, a giant media center and other facilities built for the 2008 Summer Olympics.

At $3.1 billion, China’s operating budget is comparable to the average, inflation-adjusted cost of hosting previous Winter Olympics, according to the University of Oxford researchers.

The government has also pressed businesses to take on more of the cost of hosting the Games. Other host cities of previous Olympics spent heavily to build lodging for athletes and journalists and a media center. China has taken a different approach.

In Zhangjiakou, an area near Beijing where some competitions are being held, Chinese authorities have temporarily taken over the Malaysian-owned Genting Secret Garden ski resort. The resort expanded its capacity to 3,800 rooms and vacation apartments, up from 380 before China won its Olympic bid. Lim Chee Wah, founder and a co-owner of the resort, said that he had not been told how much the government would compensate him for the use of the resort for most of the winter season, but that he trusted it would be fair.

“We said, fine, thank you, but we’ll negotiate how to do the compensation — that will be done later,” he said.

China also doesn’t count long-term infrastructure investments made in the years before the Games.

The national government spent $2 billion building an expressway from northwest Beijing to Yanqing, where Olympic sliding and Alpine skiing events are being held, and an additional $3.6 billion to extend the expressway to the Taizicheng valley, where the ski resorts are.

Before Beijing won its bid to host the 2022 Olympics, the government began spending $8.4 billion on a high-speed rail line that whisks travelers from Beijing toward Inner Mongolia at speeds of up to 217 mph. After winning the Olympics, Beijing added $1 billion to that project to build an extra segment that peels off the main line and goes up into the mountains to Taizicheng.

China regards the Olympics as transforming Beijing, which gets only a foot of natural snow most winters, into a global destination for winter sports.

“The success in opening the Winter Olympics has brought positive economic benefits and created new sources of growth for the local economy,” said the top spokesman for the city of Beijing, Xu Hejian.