Beijing wanted the Winter Olympics. All it needed was snow

The competitions that began this weekend are for the first time taking place almost entirely on artificial snow, necessitating an Olympic snow-making and water-management operation of enormous scale, and foreshadowing the reality of snow sports everywhere as the planet warms

By Matthew Futterman and Raymond Zhong 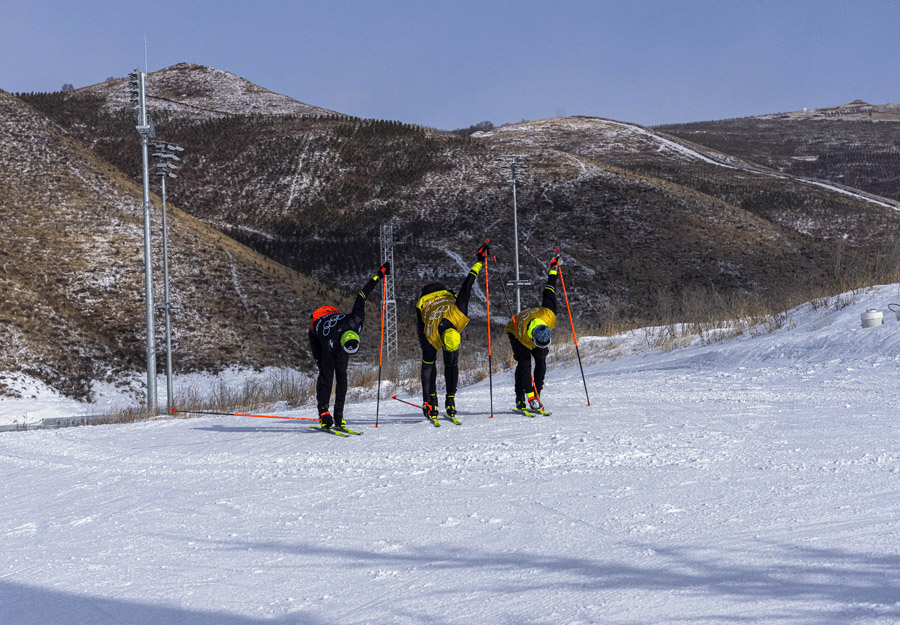 Athletes train at the national cross-country skiing center in Zhangjiakou, China, on Jan. 31, 2022, a day after a light snow dusted the nearby hills. The environmentally unfriendly secret of winter sports is that many competitions take place on artificial snow, and China’s water-scarce capital had to go to enormous lengths to make enough of it. (Hiroko Masuike/The New York Times)

BEIJING — China did not move mountains to host the 2022 Winter Olympics. But it flooded a dried riverbed, diverted water from a key reservoir that supplies Beijing and resettled hundreds of farmers and their families, all to feed one of the most extensive snow-making operations in the history of the Games.

This is what happens when the International Olympic Committee decides to bring the Winter Games to a place almost completely lacking in one of the main ingredients for winter sports: snow. What’s more, Beijing and its nearby mountains did not have that much water to make the artificial kind, either.

Machine-made snow has played a major role in winter sports for decades, even in snowier places like Norway, Switzerland and Colorado. In Beijing’s version of the Winter Games, the competitions that began this weekend are for the first time taking place almost entirely on artificial snow, necessitating an Olympic snow-making and water-management operation of enormous scale, and foreshadowing the reality of snow sports everywhere as the planet warms.

On the mountains where the Alpine competitions are taking place, which do not have any recreational skiing, narrow strips of white, visible from miles away, now cut through the brown.

Beijing officials insist that snow production for the Games will not strain local water supplies, which have struggled to keep pace with the city’s demands. But China’s herculean investments in snow making are part of larger efforts to turn the arid mountains near Beijing into a permanent ski and snowboard hub, a project that could face challenges as climate change upends patterns of rainfall and drought.

Worldwide, the environmentally unfriendly secret of skiing and snowboarding competitions is that, as natural snow becomes less reliable, they almost always take place on the artificial kind. As the planet continues to heat up, machine-made snow will play an ever-larger role in guaranteeing a consistent, high-caliber field of play.

“You could not have winter sports now without man-made snow,” said Michael Mayr, the Asia manager of TechnoAlpin, the Italian company in charge of snow-making for the Beijing Games and at six previous Winter Olympics.

What sets Beijing apart from many of those past venues are its tight supplies of water, whether for snow making or for anything else. Over the past few decades, rapid development has sapped Beijing’s groundwater. July and August often bring heavy rains, but the city and nearby mountains get only sprinkles of precipitation in the winter: less than 2.5 inches per season on average in recent decades, according to data from a weather station near the Olympic venues.

In 2017, the last year for which international figures are available, Beijing had only about as much freshwater resources per resident — 36,000 gallons — as the western African nation of Niger, at the edge of the Sahara. Zhangjiakou, the city 100 miles northwest of the capital that is hosting some skiing and snowboarding events, had 83,000 gallons per resident, comparable to Djibouti in the Horn of Africa.

The United States, by contrast, had 2.3 million gallons per person. Countries with less than 260,000 gallons of freshwater resources per person are considered water-scarce.

Florian Hajzeri, who has been in China for four years overseeing the snow-making project for TechnoAlpin, said he realized the magnitude of his task as soon as he saw the landscape of the Olympic competition areas.

Before TechnoAlpin could install pumps and build more than 40 miles of pipe, at a cost of nearly $60 million, Chinese officials first had to figure out how to deliver enough water to the mountains.

How much water? Roughly 1 million cubic meters, according to TechnoAlpin, enough to fill 400 Olympic-size swimming pools. And that was just to start the Games. More snow, and more water, will likely be needed as the competitions take place.

To gather it all, Chinese authorities have built pumping stations to carry water from reservoirs miles away.

According to a state-run newspaper, Beijing has diverted water from the city’s Baihebao Reservoir to the Guishui River, which flows near the Olympic zone but had long been mostly dried up in winter. Previously, Baihebao had primarily supplied the Miyun Reservoir, one of the largest stores of clean water for Beijing households.

Officials in Zhangjiakou — which is pronounced sort of like “jong jah coe” — have turned off irrigation across tens of thousands of acres to conserve groundwater, and resettled farmers who were living in what is now the Olympic competition area in high-rise apartments.

For skiers and snowboarders, competing entirely on machine-made snow changes everything about how they prepare for the Olympics, the biggest event of most of their lives, from the wax they use to increase speed, to training for the heightened risk of a slicker surface. In warmer weather, man-made snow surfaces tend to break down more quickly than those made of natural snow, athletes said.

“This is not the first time we have been racing on artificial snow, and unfortunately it does not seem like it’s going to be the last,” said Jessie Diggins, a gold medalist in cross-country in 2018 who has become a climate change activist in recent years.

“It’s harder and icier and transforms differently with different weather,” she said. “And because it is faster, some of the downhills ski much faster when you are rolling in. It can make the course — I don’t want to say dangerous — but more tricky in terms of figuring out how you are going to navigate corners.”

Under certain conditions, though, such as the very cold temperatures expected in China, Alpine skiers sometimes prefer artificial snow, because technicians can produce wet flakes that freeze into the kind of smooth, rock-hard surface they prefer.

“It is more dense,” said Travis Ganong, an American who specializes in speed events. “It doesn’t really form flakes, and when it is groomed it gets more packed. It just sits really well, and it becomes very uniform. It’s actually how we like it.”