China no longer needs to prove its standing on the world stage; instead, it wants to proclaim the sweeping vision of a more prosperous, more confident nation under Xi, the country's most powerful leader since Mao Zedong 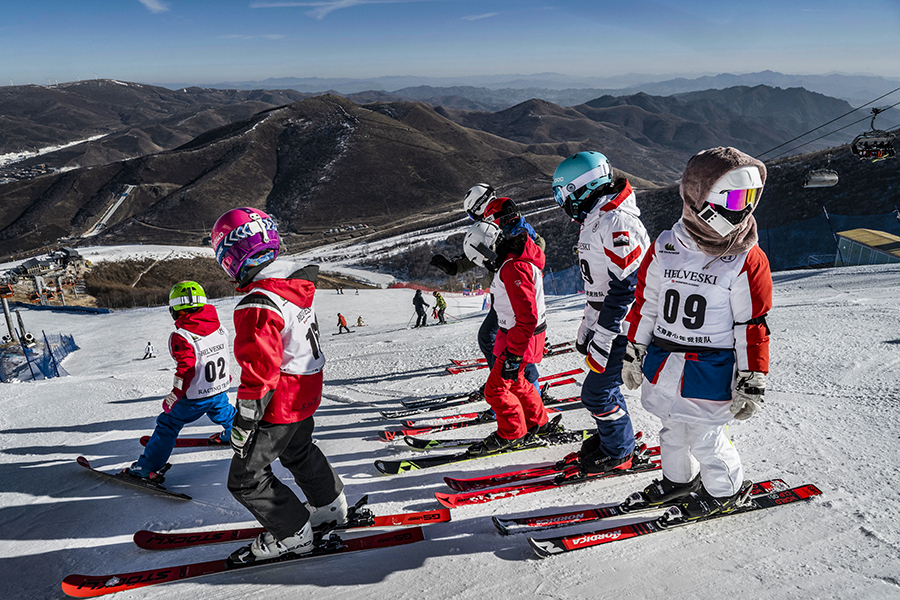 Young Chinese ski racers stand at the top of the Thaiwoo Ski Resort before it closed for the Beijing 2022 Winter Olympics, in Chongli county, Zhangjiakou, Hebei province, northern China. The area, which will host ski and snowboard events during the Winter Olympics and Paralympics was closed off to all tourists and visitors as of January 4, 2022 and will be part of the bubble due to the global coronavirus pandemic for athletes, journalists and officials taking part in the games. The Beijing 2022 Winter Olympics are set to open February 4th. (Photo by Kevin Frayer/Getty Images)

When the International Olympic Committee met seven years ago to choose a host for the 2022 Winter Games, China’s leader, Xi Jinping, sent a short video message that helped tip the scale in a close, controversial vote.

China had limited experience with winter sports. Little snow falls in the distant hills where outdoor events would take place. Pollution was so dense at times that it was known as the “Airpocalypse.”

Xi pledged to resolve all of this, putting his personal prestige on what seemed then like an audacious bid. “We will deliver every promise we made,” he told the Olympic delegates meeting in Malaysia’s capital, Kuala Lumpur.

With the Games only days away, China has delivered. It has plowed through the obstacles that once made Beijing’s bid seem a long shot and faced down new ones, including an unending pandemic and mounting international concern over its authoritarian behavior.

As in 2008, when Beijing was host of the Summer Olympics, the Games have become a showcase of the country’s achievements. Only now, it is a very different country.

China no longer needs to prove its standing on the world stage; instead, it wants to proclaim the sweeping vision of a more prosperous, more confident nation under Xi, the country’s most powerful leader since Mao Zedong. Where the government once sought to mollify its critics to make the Games a success, today it defies them.

Xi’s government has brushed off criticism from human rights activists and world leaders as the bias of those who would keep China down. It has implicitly warned Olympic broadcasters and sponsors not to bend to calls for protests or boycotts over the country’s political crackdown in Hong Kong or its campaign of repression in Xinjiang, the largely Muslim region in the northwest.

It has overruled the IOC in negotiations over health protocols to combat COVID-19 and imposed stricter safety measures than those during the Summer Olympics in Tokyo last year. It has insisted on sustaining its “zero COVID” strategy, evolved from China’s first lockdown, in Wuhan two years ago, regardless of the cost to its economy and its people.

China’s critics, activists for human and labor rights and others have accused the committee of failing to press Xi to change the country’s increasingly authoritarian policies. However, that presumes the committee has leverage to use.

China’s tenacious — many say ruthless — efficiency was precisely what appealed to Olympic delegates after the staggering costs of the 2014 Winter Games in Sochi, Russia, and the white-knuckle chaos of preparations for the 2016 Summer Games in Rio de Janeiro.

Christophe Dubi, executive director of the upcoming Games, said in an interview that China proved to be a partner willing and able to do whatever it took to pull off the event, regardless of the challenges.

The committee has deflected questions about human rights and other controversies overshadowing the Games. Although the committee’s own charter calls for “improving the promotion and respect of human rights,” officials have said it was not for them to judge the host country’s political system.

Instead, what matters most to the committee is pulling off the Games. By selecting Beijing, the committee had alighted on a “safe choice,” said Thomas Bach, committee president.

Beijing’s bid to become the first city to host a Summer and Winter Olympics took root when Lim Chee Wah, the scion of a Malaysian developer of casinos and golf courses, moved to a booming Beijing in the 1990s and wanted a place to ski.

He drove up winding roads northwest of Beijing for five hours to a mountainous region populated by cabbage and potato farmers. The area’s only ski resort was a single wooden building with a dining room, a handful of hotel rooms and a small ski shop.

“I went out and said, ‘Where is the ski lift?’ and they said, ‘You see this road going up?’” he recalled in an interview. A Toyota Coaster minibus ferried skiers up the road to the top of the slope.

Lim, who had learned to ski in the U.S. resort town of Vail, Colorado, soon struck a deal with local authorities to turn 24,700 acres of mostly barren hills into China’s largest ski resort.

In 2009, he met with Gerhard Heiberg, Norway’s representative on the executive board of the Olympic committee, who had overseen the organization of the 1994 Winter Games in Lillehammer. Together, they began envisioning how to hold the Games in the hills near the Great Wall of China.

China promised to spend only $1.5 billion on capital projects at venues, plus that much in operating expenses, a fraction of the cost for Sochi or the 2018 Games in Pyeongchang, South Korea, which cost nearly $13 billion.

China’s bid seemed unlikely to succeed, especially since the 2018 Games were also taking place in Asia and officials expected the next host to be in Europe. Then one European city after another pulled out, leaving Beijing competing only against Almaty, the former capital of Kazakhstan, once a republic of the Soviet Union.

The final tally was 44-40 for Beijing, with 1 abstention. Almaty’s supporters were left to fume over a glitch in the electronic voting system that prompted a manual recount to “protect the integrity of the vote.” That Kazakhstan has plunged into political turmoil on the eve of the Games seems now, in hindsight, further validation of the choice to pick Beijing.

“I don’t think it’s a stretch, and I’m not being disingenuous or negative toward the Chinese — they probably would not have been victorious had some of those European cities stayed in the race,” said Terrence Burns, a marketing consultant who worked on Almaty’s bid and for Beijing when it secured the 2008 Games. “But you know what? They hung in there, and you know, winners find a way to win.”

In the months before the 2008 Olympics, Xi was put in charge of the final preparations. He had only recently joined the country’s highest political body, the Politburo Standing Committee. The role was effectively a test of his leadership potential.

He took a particular interest in military preparations for the Games, including the installation of 44 anti-aircraft batteries around Beijing, even though the likelihood of an aerial attack on the city seemed far-fetched.

Preparations for these Games reflect Xi’s style of governance. He has been at the center of each decision — from the layout of the Olympic Village in Chongli to the brands of skis and ski suits. In keeping with increasingly nationalistic policies, he voiced a preference for Chinese ski equipment over imports.

When Xi went to inspect venues in the Chongli district of Zhangjiakou for the first time in January 2017, he ordered local authorities to make sure that they did not build too much — a frequent tendency of officials in China who use any international event as an excuse for extravagant projects.

He has visited the Olympic venues five times altogether to check on progress, most recently earlier this month, when he said managing the Games well was China’s “solemn pledge to the international community.”

Because of the coronavirus, foreign spectators and even ordinary Chinese are prevented from attending the Games. Instead, China will allow only screened spectators of its own choosing. It will mostly be a performance for Chinese and international television audiences, offering a choreographed view of the country, the one that Xi’s government has of itself.

If the coronavirus can be kept under control, Beijing could weather the Olympics with fewer problems than seemed likely when it won the rights to the Games seven years ago. Xi’s government has already effectively declared it a success. A dozen other Chinese cities are already angling for the 2036 Summer Olympics.

“The world looks forward to China,” Xi said in a New Year’s address, “and China is ready.”

Tweets by @forbesindia
From Byju-Aakash to PharmEasy-Thyrocare: Top 10 startup acquisitions of 2021 in India
From pearl necklace to pastel pink, the 'soft-boy' style is all the rage