Zhang Wenquan scours eBay daily for new listings, with the most expensive find being a $1,900 torch from the 2002 Salt Lake City Winter Olympics 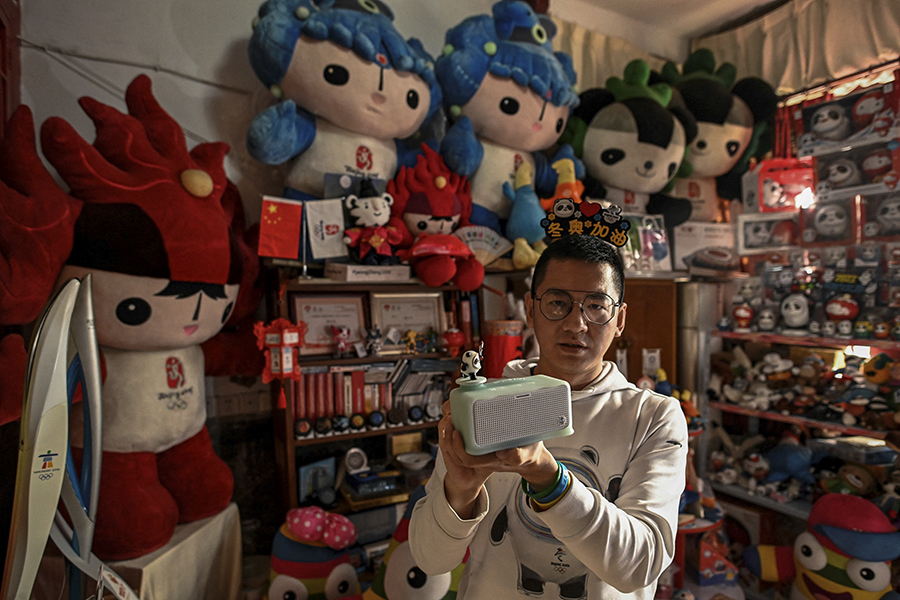 
The Chinese superfan scours the internet for rare souvenirs and snaps selfies several times a week by the countdown clock to the 2022 Winter Games in the capital.

Beijing will become the first city to host both the Summer and Winter Olympics when the event kicks off in February—a dream come true for the construction firm worker.

Zhang's interest was first piqued when he became glued to the 2000 Sydney Olympics as a high-school student.

When the Games came to Beijing in 2008, he worked as an official volunteer—a life-changing experience that sparked his passion for collecting souvenirs.

Wearing a 2022 Winter Olympics scarf and sweatshirt emblazoned with its mascot—plus a headband reading "Come on, Winter Olympics!"—Zhang shows off the array of merchandise covering his home.

The house is so full of piles of boxes that he has been forced to sleep elsewhere.

Zhang scours eBay daily for new listings, with the most expensive find being a $1,900 torch from the 2002 Salt Lake City Winter Olympics.

He has row upon row of the mascot "Bing Dwen Dwen" for the coming Winter Games—a panda wearing a shell made of ice—in various colours and sizes.

He also receives donations of merchandise from Olympic volunteers.

"Some of these people I've never even met but they still send things to me, so I feel extremely moved," he said.

His collection is now being displayed in local schools and universities in the run-up to the Games.

He proudly showed off to AFP one of his favourites, a first-edition mascot for the 1972 Munich Games that was later redesigned.

"I hear that there are only 10 of the original, so it is extremely rare," he said, carefully turning the small brown dachshund figurine over in his hands.

In 2008, Zhang helped with scoring at Beijing's Wukesong Baseball Stadium—a photo from the time shows a scrawny, bespectacled young man in a sky-blue Olympic jersey proudly holding a baseball bat aloft in an empty arena.

In his cluttered house, a framed certificate of participation hangs on the wall.

The mega-fan said he often skipped meals during the Games to collect the food and drink tokens given to volunteers rather than exchanging them for supplies— despite catching a cold.

"I suffered not a small amount back then!" he chuckled.

But Zhang was intoxicated by the atmosphere in 2008 at a time of extraordinary national pride.

China won 48 gold medals and displayed its growing strength as a global power.

Zhang was not successful in the competitive selection process to be a 2022 volunteer but hopes to obtain tickets for the opening and closing ceremonies—as well as his favourite sport, figure skating.

His face lights up when he recounts waiting outside the capital's "Bird's Nest" stadium during a dress rehearsal for February's Games, watching rays of light beam into the night sky.

"The stadium was lit up spectacularly, it was several hundred times more beautiful than the 2008 Beijing Olympics," he said.

And Zhang is already making plans to go to Paris for the 2024 Games.

"I really want to collect the Paris 2024 torch and mascot. Although they haven't been released yet, I'm ready and waiting."

Tweets by @forbesindia
London, Paris, Amsterdam: Cities are recycling energy from the subway to heat buildings
5 predictions for 2022—autonomous mobile robots will step out and drones will go everywhere