Tokyo's first Paralympics helped break down barriers to the acceptance of people with disabilities in Japan, experts say, and this year's Games offers a chance to highlight and address the difficulties that remain 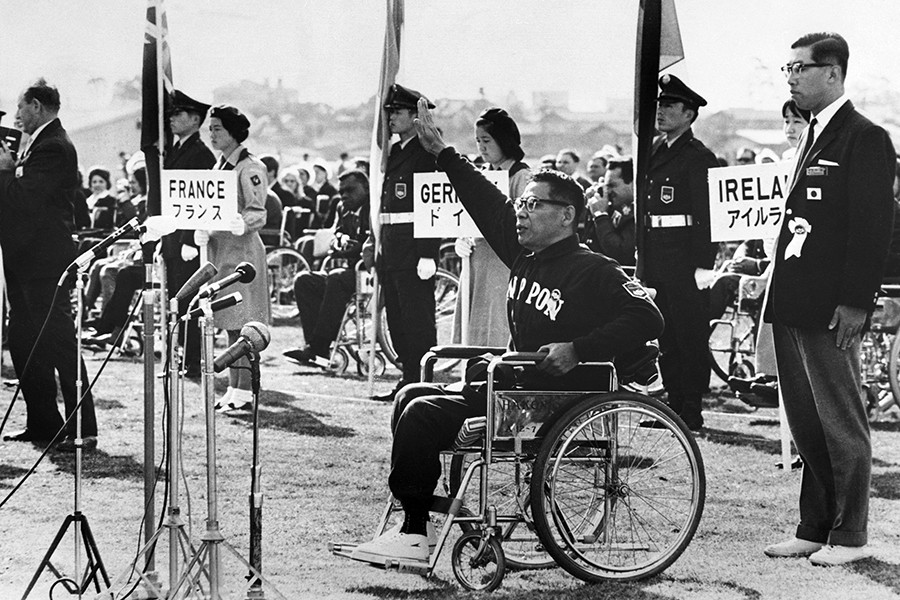 Toshio Aono takes oath, on November 12, 1964, during the opening ceremony of the Para-Olympic games in Tokyo
Image: Staff / AFP

Tokyo is the first city to host the Paralympics twice, and Hideo Kondo says taking part in the 1964 Games was a life-changing experience that inspired him to pioneer accessibility improvements.

Tokyo's first Paralympics helped break down barriers to the acceptance of people with disabilities in Japan, experts say, and this year's Games offers a chance to highlight and address the difficulties that remain.

For Kondo, who competed in archery, wheelchair basketball and athletics, the 1964 Games were a turning point after years of being treated like an object of pity.

"A window suddenly opened in my life after participating in the Paralympics," the 86-year-old told AFP.

Kondo has used a wheelchair since the age of 16, following a spinal cord injury suffered at work in a coal mine.

Before being invited to join the Games by Yutaka Nakamura, a doctor who campaigned to bring the Paralympics to Tokyo, he lived at a rehabilitation facility in western Japan.

"Kind facility staff would take us to various places, including bathing beaches, but all those beaches were in isolated places," he recalled.

"We swam at a beach hidden behind pine trees, where we watched a crowd of people swimming at another beach in the distance," Kondo said.

"It was at a time when staff members felt sorry for us, the disabled, for being exposed to eyes of the public," because of unspoken social stigma, he added.

The Games has grown massively since the Tokyo edition in November 1964, when 378 athletes took part in nine sports over five days.

It was only the second Games after Rome 1960, and the first in which the word "Paralympic" was used.

For Kondo, it meant a series of new experiences -- from his first plane journey to his first time riding a bus without having to get out of his wheelchair.

Staying in the step-free athletes' village, he was also able to use the bathroom without help from others for the first time.

That helped him realise that "with the right environment, people with impairments can lead an independent life that is no different to people without disabilities".

He went on to work for a local government in western Tokyo's Machida, where the mayor pledged to incorporate the needs of wheelchair users into the city's redevelopment.

"No construction plan could be implemented without my personal stamp," Kondo said.

He requested the removal of steps, and made sure that inclines were gentle enough for a wheelchair.

Their work was a "historic first step" that paved the way for improvements to accessibility nationwide, he said.

"What we were doing was Japan's first barrier-free city planning," Kondo added, and laws on accessible infrastructure later used Machida as a reference point.

Before 1964, there were no Japanese sports events for people with disabilities, who were often excluded from society, said sports sociology expert Tadashi Watari.

"If a child was born with a disability, it was felt as shameful and they were hidden inside a room of the house," Watari, an associate professor at Juntendo University, told AFP.

So when people watched the Paralympics, they "keenly felt the gap between Japan and developed countries" in terms of sporting and other opportunities for disabled people.

The 1998 Winter Paralympics in Japan's Nagano was another landmark event, with local media covering the event as sports news rather than social affairs, he said.

While this year's Games has provided a welcome focus on the problems that remain in terms of disability inclusion in Japan, there has been mixed reaction among Japanese people with impairments.

Some feel medallists are "superhumans in a distant world, who have nothing to do with them", Watari said.

Kondo agrees that the training regimes of elite para athletes and their record-breaking performances are "incomparable with my time".

And despite big leaps in accessible environments in Japan, social isolation remains a "huge problem" for many people with disabilities, he said.

"I hear TV commentators cheering on athletes, saying they are moved by their performances, but I wonder what the impact will be on Japanese society once this Paralympics is over."

Tweets by @forbesindia
Jet, Set, Debt: How InnoVen built its equity among unicorns
AI adoption and its significance in retail world