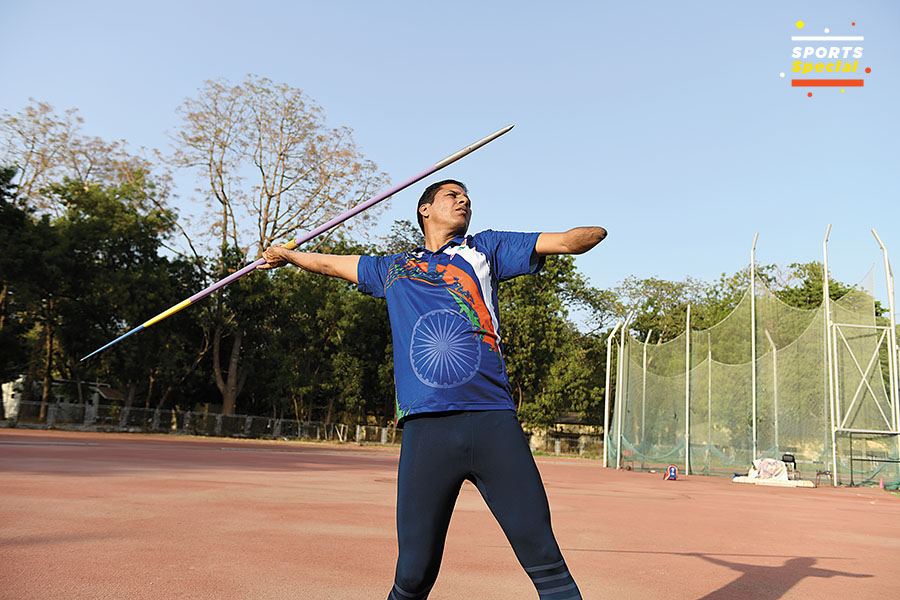 Devendra Jhajharia was nine when, climbing a tree in his hometown Churu in Rajasthan, he came in contact with an 11,000V electric cable. He lost his left arm and doctors said that the boy, born into a family of farmers, would never be mentally or physically strong.

Days later, when Jhajharia saw a schoolmate throw a javelin, he too wanted to throw one. And he did—farther than what the first boy had. Enthused, Jhajharia built a javelin at home with bamboo and an old spear head, and started practising. At 14, he competed at a district-level championship with his homemade javelin, and won, despite not having any formal training. “It felt like I had won an Olympic Gold, because it was a huge achievement for me,” says Jhajharia, 38, sitting at home, which is a quarter in the Sports Authority of India campus in Gandhinagar, Gujarat. “Somewhere deep inside my heart I didn’t want anyone to call me weak. I proved myself to be strong, and showed everyone that I was as capable as any other athlete.”

Jhajharia is the first Indian to win two Golds at the Paralympics (in 2004, Athens, and 2016, Rio), and in 2015 he won Silver at the IPC Athletics World Championships, Doha. At present, he is training for the 2020 Summer Paralympics.

The Paralympic Games, which started out as an archery event in 1948 for British World War II veterans, has grown to become a major international sporting event. At the last Paralympic Games in Rio in 2016, there were 4,333 participants from 159 countries, plus the Independent Paralympic Athletes (IPA), competing in 528 medal events. India, which debuted at the Summer Paralympics in 1968, won more medals at the 2016 event—four medals, in high jump, javelin and shot-put—than the country’s contingent at the Olympics, which brought home only two medals, their worst performance in 12 years. This improved performance was on display at the 2018 Asian Para Games in Jakarta, Indonesia, as well, where India won a total of 72 medals (15 Golds, 24 Silvers and 33 Bronzes), up from the 2014 tally of 33 medals (three Golds, 14 Silvers, and 16 Bronzes).

Para athletes, long relegated to the shadows in India, now find themselves in the limelight. What this new-found recognition has done is highlight the ambitions and capabilities of differently abled sportspeople, and their ability to overcome immense physical and mental trauma. 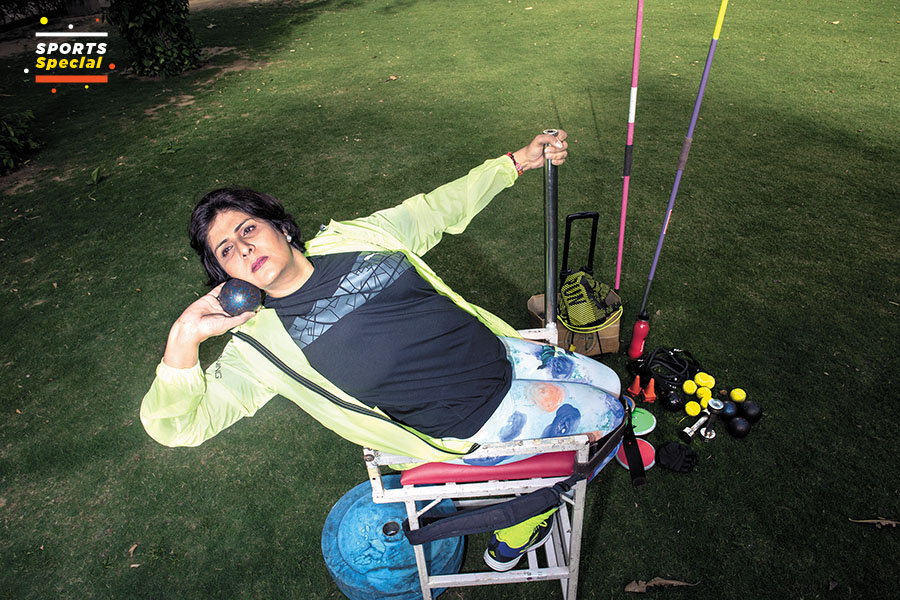 Para athlete Deepa Malik was the recipient of the Arjuna Award in 2012
Image: Amit Verma
Deepa Malik (48) was diagnosed with a spinal tumour when she was six. Following surgery and physiotherapy, the Bengaluru-born girl resumed a normal life, which, in her teenage years, included a healthy dose of sporting activities such as swimming, cycling and basketball. However, at 29, Malik was once again diagnosed with a spinal tumour, which left her paralysed from the chest downwards, despite two more surgeries. “The doctors said I would never be able to walk again,” says Malik, who now lives in Gurugram. “But giving up was never an option for me.”

A mother of two daughters, she started training in athletics at Ahmedanagar in Maharashtra. At 36, she won Silver for shot-put at the 2011 World Championships in New Zealand, and became the first Indian woman to participate in and win Silver for shot-put at the Paralympic Games in 2016. In 2018, she won Gold at the F-53/54 javelin event at the para athletic Grand Prix in Dubai. With 23 international medals and 68 national and state-level medals in swimming, javelin, shot-put and discus events, Malik has been listed as one of the 10 most inspirational women para-athletes in the world by International Paralympic Committee, and was the recipient of the Arjuna Award in 2012.

“I still remember the time while training, when she used to be in a lot pain. Her neck and shoulders used to become stiff but still she wouldn’t give up. She is a very disciplined student,” says Dr Chirag Sethi, Malik’s nutritionist. 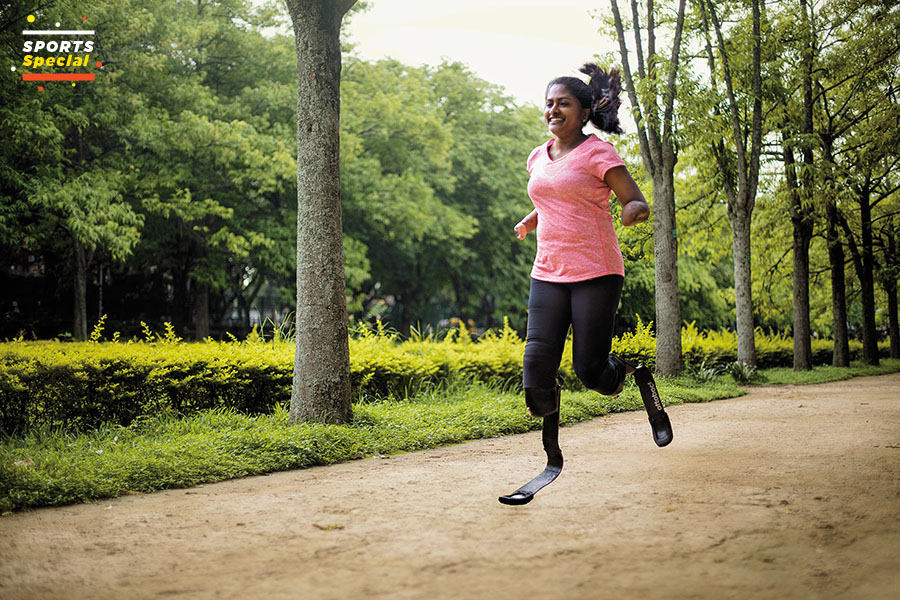 Blade runner Shalini Saraswathi came third in the 2018 National Para Athletic Championship in Panchkula
Similar is the story of Shalini Saraswathi (40), who was leading a rather normal life till the age of 32—she was celebrating her fourth wedding anniversary in Cambodia. On her return to India, she was diagnosed with a rickettsial infection, which caused a miscarriage and multiple organ failure. Two years later, the doctors had to amputate both her arms (below the elbow), and both her legs (below the knee).

“For two years, we tried every possible way and alternative to cure the disease, but nothing worked,” says Saraswathi, who lives in Bengaluru. “I accepted that amputation was the only way forward with life. It was quite painful, both mentally and physically, but with constant support from family and friends I fought back.”

Saraswathi had no background or earlier interest in sports, but took to athletics after she lost her limbs. She began running and training with prosthetics, and went on to participate in the 2016 10-km run sponsored by software services company TCS; she completed the run in 2 hours and 2 seconds. The following year, she bettered her timing to 1 hour 35 minutes. Saraswathi has subsequently participated in the 2018 National Para Athletic Championship in Panchkula, where she came third.

“All of us got our strength from Shalini,” says her elder sister Shanthi Saraswathi. “She never gave up. There were times when I gave up, the pain that she went through was unimaginable. I prayed that she should just pass on, I really did that.” 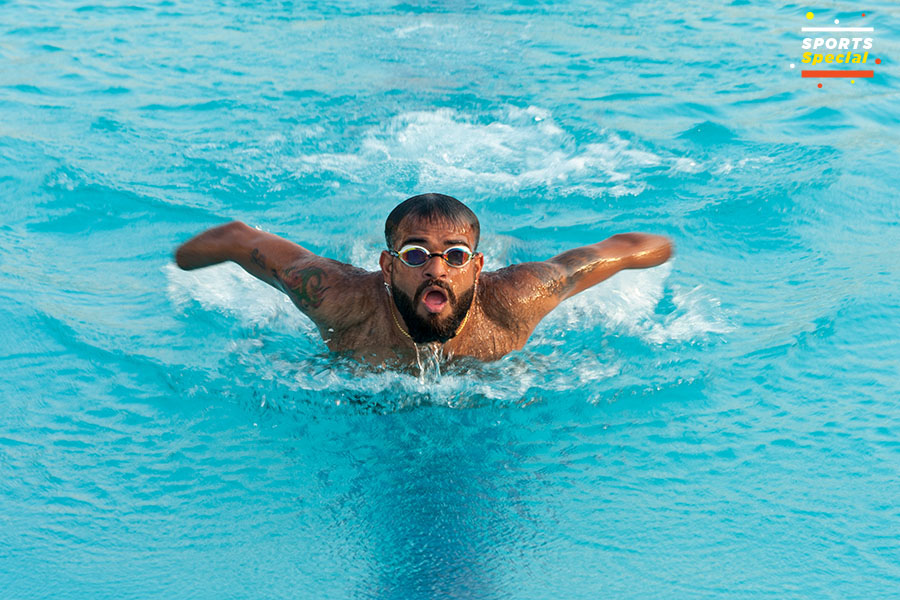 In 2018, Swimmer Suyash Jadhav made history at the Asian Para Games by becoming the first Indian to win three medals in any major international event
Image: Mexy Xavier
Friends and family often underestimate the strength and capabilities of those who have endured physical disabilities. As was the case with Suyash Jadhav (26) from Solapur. He was a Class 6 student when he got electrocuted at a construction site, causing both his arms to be amputated. The boy, who had learnt swimming at the age of two from his father Narayan Jadhav, a national-level swimmer who could not continue his sporting career because of circumstances, was not expected to swim again.

“After his accident, we were shattered and couldn’t understand what to do,” recalls Narayan. “But one day, we went on a family trip to Trimbakeshwar Shiva temple in Nashik. There was a pond inside the temple complex, where all the family members were swimming. I challenged Ayu [Suyash] and pushed him inside the pond to see whether he was able to swim or not. To everyone’s shock, he could swim normally and from there on we got our confidence back. Today I’m very proud of him because he is fulfilling my dreams.”

Jadhav, who now trains at the Sports Authority of India facility in Balewadi, on the outskirts of Pune, won Silver and Bronze at the 2015 IWAS World Games in Sochi, Russia, and is the only Indian para swimmer to achieve the ‘A’ qualifying mark at the 2016 Rio Paralympics. . “I couldn’t participate in the 2014 Asian Commonwealth Games even after rigorous practice due to lack of technical knowledge,” says Jadhav. “I was supposed to get my licence renewed for playing in international games. I have missed a lot of competitions because I did not know the procedure. I practised day and night, missed my college lectures and examinations, and still couldn’t participate. I almost went into depression in 2015 and stopped swimming for three months.”

He eventually decided to get back to swimming. Jadhav created history at the 2018 Asian Para Games by becoming the first Indian to win three medals at any major international event. “It was a great feeling to become the first Indian para swimmer to win Gold for my country,” says Jadhav.

"As per Census 2011, in India, of the 121 crore population, about 2.68 crore are ‘differently abled’, which means about 2.21 percent of the population," says Deepthi Bopaiah, executive director, GoSports Foundation, which works towards supporting athletes across various sports disciplines. There is a need to create awareness in society about the challenges faced by differently abled individuals, as well as the need for a better support system.

“For instance, if 10 to 12 percent of India’s population is disabled, then you should have seen 10 to 12 disabled students in school. If you didn’t, it’s not because they don’t exist but because they are not included in your everyday life. Since you never go to school with people with disabilities, you don’t really know how to cope around them,” says Saraswathi. For para athletes, there is a lack of support and infrastructure, which means most have to find their own means to train and fund their sporting careers.

GoSports Foundation, started in 2008 by Nandan Kamath, takes care of the financial expenses of Jadhav and supports 45 para athletes, providing them with equipment, coaching facilities, and access to sports centres across the country including Invictus Performance Lab (Bengaluru), Pro-Health Asia (Delhi) and LiveActive Physiotherapy (Mumbai).

“In 2015, we introduced the Para Champions Programme exclusively for differently-abled athletes. It focuses on their specific sporting requirements and gives them a platform to compete without worrying about external obstructions thus allowing them to focus on their sport. As an organisation, we understood that para athletes must get the same opportunities as able-bodied athletes who compete at higher levels. The aim is to bring structure, planning and vision to the Indian Paralympic movement,” says Bopaiah.

“The government needs to organise more competitions for para athletes. Better facilities and equipment are provided to abled athletes and there are many competitions organised for them,” says Jadhav. “Since this January, there has not been a single competition for disabled athletes.”

Tweets by @forbesindia
Yes, India's economy is growing, but can you trust the data?
Nirmala Sitharaman is new Finance Minister, Amit Shah gets Home portfolio