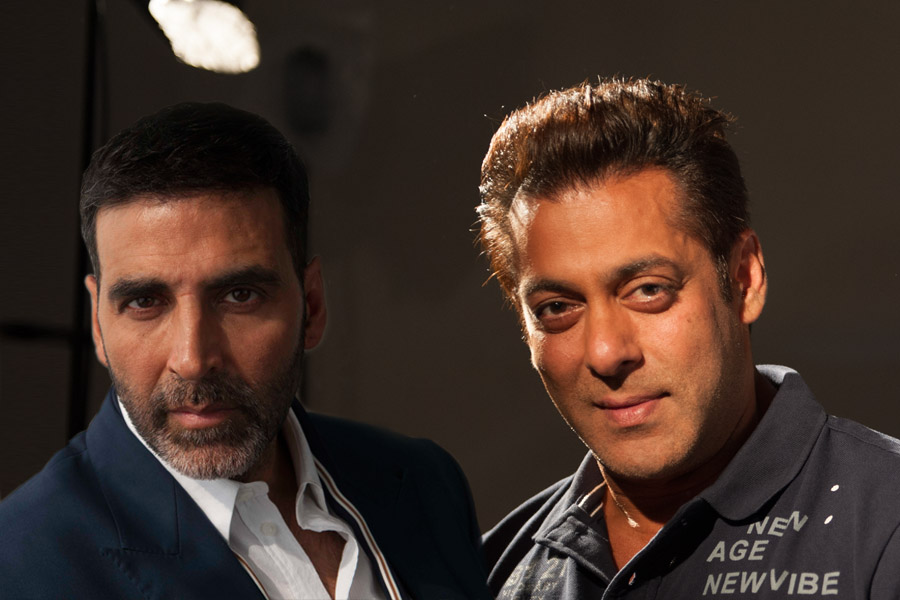 (Left to right) Akshay Kumar and Salman Khan
Bollywood actors Salman Khan and Akshay Kumar (for the second successive year) have made it to the ‘World’s 100 highest-paid entertainers', released by Forbes on Tuesday. Another popular superstar Shah Rukh Khan – who was ranked 65th in the Forbes 2017 list – has dropped out of this year’s Forbes list.

Akshay Kumar has secured the 76th spot – tied with Scarlett Johansson -- in the 2018 top 100 list with earnings of Rs 270 crore ($40.5 million) this year. Salman Khan’s earnings in 2017-18 so far have been Rs 251 crore ($37.7 million) which gave him the 82nd spot. The Bollywood film stars join the ranks of international actors such as George Clooney and Dwayne Johnson in 'The World's Highest-Paid Entertainers 2018 list which is topped by American Boxer, Floyd Mayweather ($285 million).

The methodology of the listing for ‘Forbes Celebrity 100’ ranks the global celebrities using their pretax earnings from June 1, 2017 till June 1, 2018, before accounting for manager fees, lawyers and agents. The figures taken into consideration have been shared by Nielsen, Pollstar, IMDB, SoundScan, NPD BookScan and ComScore, including interviews with industry experts and many of the stars themselves.

Kumar has been described by Forbes as one of Bollywood's leading men, “who has transitioned to socially-conscious roles, such as 'Toilet: Ek Prem Katha,' a comedy supporting government campaigns to improve sanitation, and 'Padman,' about a guy hoping to provide inexpensive sanitary pads to rural communities. He still mints millions from backend profits and endorsing some 20 brands, including Tata and Eveready.”

According to Forbes, Salman Khan has been called Bollywood's "mainstay" who "continues to produce and star in hits such as ‘Tiger Zinda Hai’, cashing in on backend profits. Coupled with a slew of endorsements from Suzuki motorcycles to Chlormint gum, he remains one of India's top earners."

Dwayne "The Rock" Johnson ($124 million) is among the top 5 in 'The World's Highest-Paid Entertainers' 2018 list, followed by Musicians, U2 ($118 million) at No.6 and Coldplay ($115.5 million) at No. 7.
Following Mayweather at No. 1 is George Clooney (earnings $239 million) and Kylie Jenner (No. 3 with $166.5 million). Kylie, the 20-year-old mother, reality television star and owner of Kylie Cosmetics, is youngest on the list. Later this year, she’ll likely take the title Mark Zuckerberg and Bill Gates once held: the world’s youngest ever self-made billionaire, Forbes noted.

Like The Rock, Jenner has leveraged social media to market her wares to a mammoth audience—over 110 million followers on Instagram alone, according to Forbes.

“The world’s 100 top-earning entertainers pulled in a combined $6.3 billion pretax over the past 12 months, up 22 percent from last year; 11 superstars crossed the $100 million threshold, more than double the number from the last two years combined.,” it noted.

Tweets by @forbesindia
Ofo: Wheels of fortune
Banking on the LIC lifeline