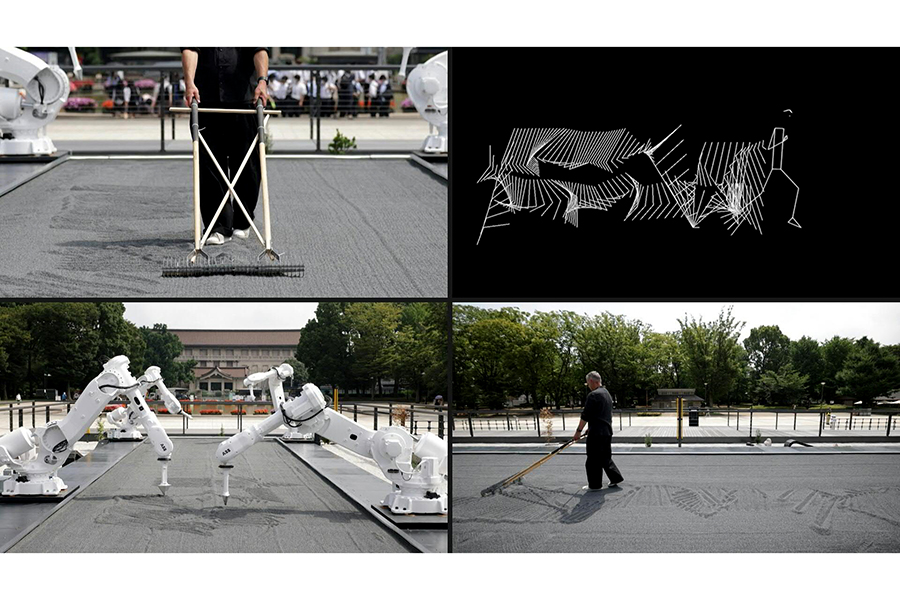 At a serene zen garden in a Tokyo park, abstract lines inspired by the movements of Olympic athletes are carefully traced in the gravel— not by monks, but by robots.

Their drawings are generated by a bespoke AI computer programme that analyses video footage from past Olympic Games, tracking the position of athletes' limbs to create unique designs.

"They're acting as performers to create this cultural intervention next to the backdrop of the Games," the installation's creator, British artist Jason Bruges, told AFP.

The robotic "gardeners", each about two metres (6.6 foot) tall, have been given a new lease on life in Tokyo's Ueno Park following 10 years of use by a car manufacturer.

They will create around 150 different illustrations throughout the virus-postponed Tokyo 2020 Olympics and Paralympics, which end on September 5.

Bruges said he wants to make people look at technology in different ways and was "inspired by the athletes preparing for and taking part in the Games".

Data gleaned from clips of the athletes in action is used to "form or make lines" that mirror the movement of their limb joints, said the team's creative technologist Joel Luther-Braun.

A 25-year-old Tokyo resident who stopped by to see the artwork said he was intrigued by the robots' "human-like" movements, unlike regular machines designed to work at high speed.

"I don't get bored by looking at them. They look almost human and I find them cute," Masato Ito told AFP.

Bruges said he was surprised that people who came to see the installation wanted to know the robots' names.

"It's fantastic being in the culture where there's a lot of exposure to technology," he said.

"There's definitely a culture (that means) people here are attaching human characteristics to these machines," he said, adding that there may be an opportunity for viewers to name the robots.

Tweets by @forbesindia
AI and human ethics: On a collision course
This business trip could have been a Zoom call: Companies rethink travel