Unlike Tokyo's mostly empty stadiums, the Beijing Games will take place in front of crowds, albeit tickets will only be sold to people living in China 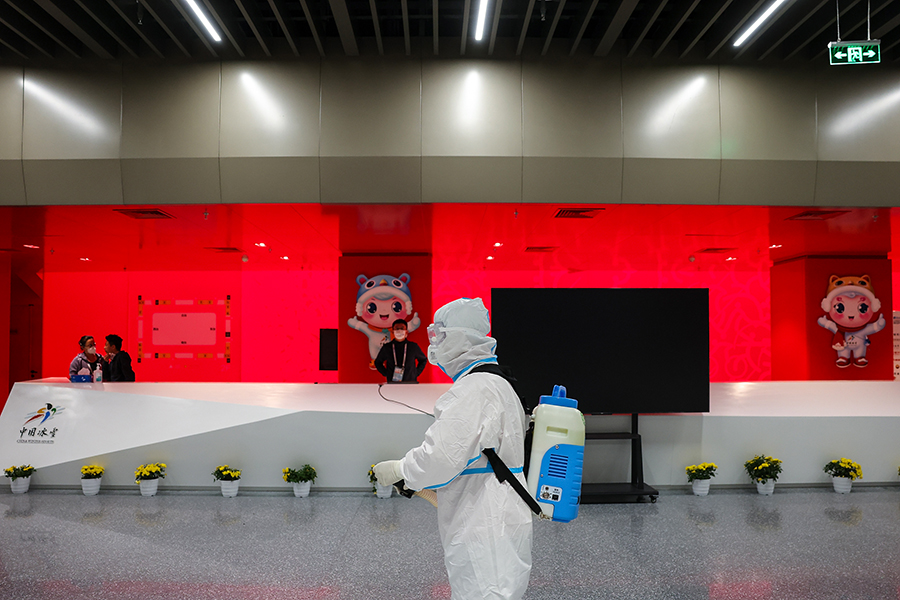 A worker in a protective suit sprays disinfectant during the 2021 Asia Open Figure Skating test event for the Beijing 2022 Winter Olympics at Capital Indoor Stadium on October 15, 2021 in Beijing, China. Photo by Lintao Zhang/Getty Images

Beijing, which will host the 2022 Winter Olympics, is staging a series of test events—giving a strong taste of what the Games will look like and what coronavirus measures will be in place. AFP Sport takes a look at what athletes and spectators—only people living in mainland China are allowed to attend—can expect when the real thing happens on February 4-20 next year:

What are the rules for athletes?

China plans to host the Games under what could be the strictest Covid-19 safety rules at a mass sporting event since the pandemic began, even compared to the summer's mostly crowd-free Tokyo Olympics.

Chinese officials say participants will stay in a "closed loop"—a strict bubble insulating them from spectators and the outside world for the whole Games.

Athletes will have to be fully vaccinated or undergo a 21-day quarantine on arrival in the Chinese capital. Athletes did not have to be vaccinated in Tokyo.

Everyone in the closed loop will have to take daily virus tests.

Like in Tokyo, athletes will have to wear masks pretty much all of the time, except when they are competing and for a quick photo on the podium if they win a medal.

China has largely sealed its borders since the virus emerged there towards the end of 2019, but about 2,000 overseas athletes, coaches and team officials were expected to be involved in the test events.

What are athletes saying?

The ongoing test events, which are a chance for organisers to fine-tune preparations, last until the end of the year and include domestic and international competitions in everything from ice hockey to luge and speed skating.

Athletes currently in Beijing appear resigned to the rules.

Chinese snowboarder Cai Xuetong said that the main disruption has been in the build-up to the Games—China's sports authorities have prevented athletes from competing overseas because of the virus.

"We always travel to different countries and do lots of competitions, but last season, it was totally off," Cai recently told AFP in Shanghai.

What about fans and media?

Unlike Tokyo's mostly empty stadiums, the Beijing Games will take place in front of crowds, albeit tickets will only be sold to people living in China.

There have been no crowds yet at the test events, but others, such as AFP reporters, had to prove they tested negative for the virus in the previous 48 hours and show their recent travel history.

Once inside, they had to wear N95 masks -- a higher-spec alternative to surgical masks—and interview athletes via video only.

That is different from Tokyo, where reporters were able to interview athletes face to face, albeit at a distance. Such rules could yet change for the real thing in February.

Organisers argue that the measures will give Beijing the best chance to hold a safe, smooth Games.

But they also admit they face "great pressure in epidemic prevention and control".

If any athletes test positive for the virus they will be taken in negative-pressure ambulances to designated medical centres for treatment, said Zhao Chengfang, deputy director for Covid-19 prevention at the Capital Indoor Stadium.

A small army of about 100 emergency-response personnel is on standby to enter the stadium if needed, Zhao added.