What is missing are the normal sounds that animate an Olympic host city, a window ajar with the TV broadcasting a thrilling final or a bar crowded with revelers celebrating the latest gold medal. There are few Olympic billboards in Tokyo 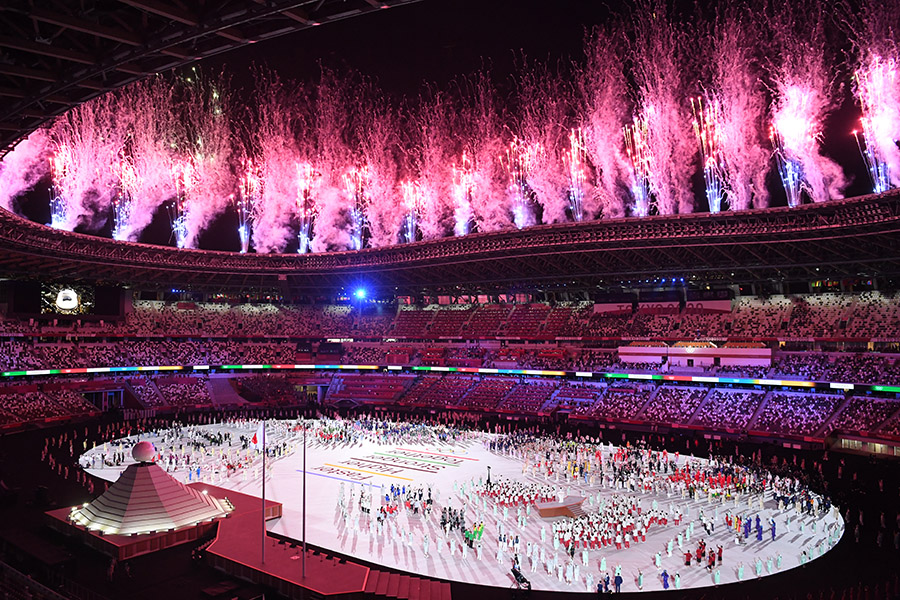 The opening ceremony of the Tokyo Olympics is held with nearly no spectators on July 23, 2021. The sequestered Games have left the host city feeling like anything but; Image: James Hill/The New York Times

TOKYO — Outside the Olympic bubble is a city that does not want us.Like many of the tens of thousands of people visiting Tokyo for the Games, I am in a permeable cocoon that is supposed to keep me separate from the city’s residents. Those people include my mother.Shuffling from table tennis to archery to taekwondo, from diving to boxing to weight lifting, I hear snippets of Tokyo’s summer soundtrack: the shrill of cicadas, the clomp of kids in cleats heading home from soccer, the trill of a wind chime not quite stilled in the August heat.What is missing are the normal sounds that animate an Olympic host city, a window ajar with the TV broadcasting a thrilling final or a bar crowded with revelers celebrating the latest gold medal. There are few Olympic billboards in Tokyo. Toyota and other Japanese companies have read the mood and refrained from running advertisements tied to the Games. Apart from the athletic venues scattered across the Japanese capital, there is little sign that the greatest and most expensive sporting spectacle on earth is taking place here.It is strange to be in a host city that has so determinedly turned its back on the Games, especially given the Japanese sense of hospitality. Yet who can blame the residents of Tokyo, my family and friends included?

The Games may have brought Japan 18 golds as of Tuesday afternoon, including victories for nine judoka and a 13-year-old street skateboarder. Yet the people of Tokyo have been sequestered from the Olympics. With a state of emergency in place because of the coronavirus, they are barred as spectators. They cannot tour the venues. The only people who can witness each shattered Olympic record are people from the outside, people like me.With us, though, we have brought the threat of disease. The Olympics have coincided with Tokyo’s highest daily caseloads since the pandemic began. Prime Minister Yoshihide Suga has insisted that the rising count has nothing to do with the influx of foreigners. Most of the cases inside the Olympic bubble are among locals, contractors or others who live in the capital, Japanese Olympic officials have said. That means domestic transmission is to blame, made all the worse by Japan’s sluggish vaccine rollout. Less than a third of the country is fully vaccinated. 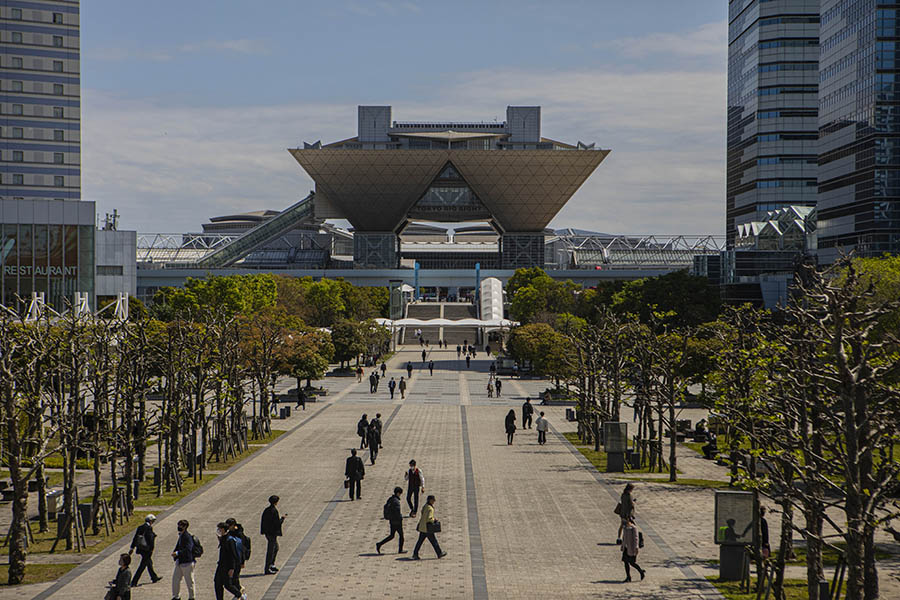 Big Sight, the main broadcasting and news center for the Olympic Games, in Tokyo on April 15, 2021. The sequestered Games have left the host city feeling like anything but; Hiroko Masuike/The New York TimesWhile thin crowds of onlookers gather to catch a glimpse of a soaring bike at a BMX event or to peer through the fence at the Olympic Stadium, many others in Tokyo have given up on the Games altogether. On Sunday, a group of protesters gathered near the tennis arena and shouted anti-Olympic slogans that wafted into the men’s singles final taking place inside. Another rally was held in front of the prime minister’s residence.The Japanese news media have resorted to gotcha journalism, trying to catch foreigners who have breached quarantine protocols, traveling on public transport or lingering at restaurants when they are supposed to be eating at their hotels. On Monday, the broadcaster NHK denounced the lack of social distancing on crowded Olympic buses. Although those of us here for the Games have gone through many rounds of COVID testing, there were no requirements that we be vaccinated to enter the country.Inside the bubble, the legion of volunteers, some of whom have not received their injections, try their best. Old men swing their arms with the vigor of cricket bowlers — not an Olympic sport yet — guiding a straggling journalist to a crosswalk. Young women offer squirts of anti-mosquito spray and paper fans, as well as neck towels with instructions in English on what to do should heat stroke strike: “Move to a cool area, loosen clothes and cool down the body.”Just like a COVID bubble that will supposedly keep Tokyo safe from us, the Olympics’ guardians pretend that the Games float above politics. No protests should sully the Olympic podium, they have warned. Yet the Olympics are a fundamentally political act by a city or a nation, for good or for bad. Berlin 1936 exposed the racism and malevolence of Nazi ideology. Tokyo 1964 was Japan’s announcement that it had transcended wartime defeat and aimed for economic glory. Seoul 1988 showcased a similar statement of arrival, as did Beijing 2008.What will Tokyo 2020, held in 2021, signify? The organizers have taken “peace” as one of their bywords. It’s a hard ideal to dispute. And given Imperial Japan’s brutal sweep through Asia in the past century, pacific ambitions are worthy. At the Olympic opening ceremony, in a nearly empty stadium saddled with cost overruns, paper doves fluttered from the sky.On Friday at 8:15 in the morning, Japan will mark the 76th anniversary of the U.S. atomic bombing of Hiroshima, which is believed to have killed more than 150,000 people. At the 1964 Games, a runner who was born on that day was chosen to light the Olympic flame.This time around, the International Olympic Committee has declined to remember the detonation of the atomic bomb, which was followed by another in Nagasaki three days later, with a moment of silence, despite a petition led by a onetime mayor of Hiroshima.So much of Tokyo burned, too, in the last months of the war from American firebombing. My grandmother, who would soon be a war widow, recalled the crackle of wooden houses consumed like kindling, how the flames danced as the shoji paper screens caught fire.Years before, in Shanghai, Japanese air raids left a city gutted. Then the Imperial Japanese troops turned to Manchuria, to the Philippines, to Indonesia, and left a trail of blood.Most of what those in the Olympic bubble will see of Tokyo comes from the postwar era. Skyscrapers sprouted from the ashes of war. Many athletic venues are on reclaimed land, like the archery field known as Yumenoshima, or the Island of Dreams.This Tokyo is impressive, all steel and glass and soaring atriums, ingeniously engineered to withstand earthquakes and landscaped with plenty of trees. But it is an unyielding place, bound by endless regulations and cautionary fine print, and during a state of emergency, it feels particularly lonely.The Tokyo that is missing from these Olympics, the one out of view of the buses shuttling from stadiums to hotels, is a city constructed on a more intimate scale. Here, buildings have wooden embellishments and entryways so low that heads must be bowed to enter. They are the kind of convivial places where taxi drivers take off their white gloves at the end of the day and sit next to workmen in boots for a beer or a bowl of Tokyo’s hearty offal hot pot.Late last week, I went to watch badminton at the Musashino Forest Sports Plaza in western Tokyo. Toward the end of World War II, the neighborhood was bombed because it was home to a military aircraft factory. (A couple of incarnations later, the company that owned it turned into Subaru, the airplane and car manufacturer.)When the Japanese mixed-doubles badminton pair beat their rivals from Hong Kong to claim bronze, a group of volunteers jumped up and down in excitement. It was a display of patriotism that surely broke Olympic protocol. But it had been a long day, and there were no spectators to take in the victory.Later, I walked out of the sports arena into the simmering heat. The badminton journalist corps, such as there was, had dispersed. There was no one around, just a row of white tents and empty corridors, more the feel of a field hospital than an athletic venue. The air sang with the sound of summer insects. The intensity of their thrum is perhaps highest before they die.Sweat pooled on my upper lip inside my face mask. Before me, on the path, lay a single cicada wing, glistening in the sun.