The 2022 Beijing Winter Olympics will be spread over three distinct zones and merge new venues with existing ones from the 2008 Games, including the "Bird's Nest" stadium 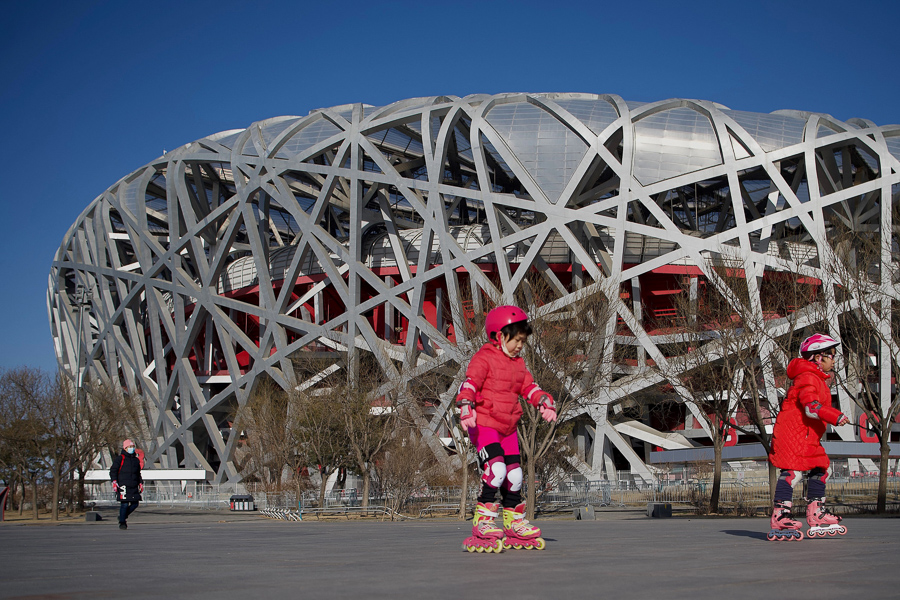 Children skating past the Bird's Nest stadium, the venue for opening and closing ceremonies for the 2022 Winter Olympics, in Beijing

The 2022 Beijing Winter Olympics will be spread over three distinct zones and merge new venues with existing ones from the 2008 Games, including the "Bird's Nest" stadium.

With 100 days to go, AFP Sport takes an in-depth look at where the Olympics will take place:

Other sites from the 2008 Games have also been spruced up. Notably, the "Water Cube" aquatics centre has been restyled as an "Ice Cube" for curling.

The Wukesong Sports Centre and fan-shaped National Indoor Stadium—which held the basketball and gymnastics events in 2008—have been renovated to host ice hockey.

The only new addition to Beijing's existing Olympic Park is a 12,000-capacity speed skating oval nicknamed the "Ice Ribbon".

New venues have been built in other parts of the city, such as the striking location for some of the skiing and snowboarding events.

The 60-metre-high "Big Air" jumping platform stands in the shadow of four vast cooling towers at a former steel mill that once employed tens of thousands of workers and is now a trendy bar, restaurant and office complex.

The Beijing Olympics has prompted a government-backed winter sports drive that aims to build a one-trillion-yuan ($156 billion) industry by 2025.

The Olympic zone of Yanqing—a suburb about 75 kilometres (50 miles) northwest of the city centre—is already home to several ski resorts and swanky hotels.

It's also the site of China's first bobsleigh, skeleton and luge tracks at the National Sliding Center, which can seat 2,000 people and accommodate a further 8,000 standing spectators.

China has linked the small city of Zhangjiakou—about 180 kilometres northwest of Beijing—to the other two Olympic hubs via what state media claims is the first rail line allowing driverless trains to reach speeds of up to 350 kilometres per hour.

Organisers have temporarily taken charge of an existing resort to hold the freestyle skiing and snowboarding competitions.

It lies a few kilometres from Zhangjiakou hub's Olympic Village, a cluster of chalet-style apartments ringed by mountains.

There are three newly constructed villages—one in each of the three hubs—to accommodate over 6,000 athletes and officials in total.

They will be converted into public housing or business parks after the Games.

Tweets by @forbesindia
Marshmello, David Guetta: Who's the most popular DJ of the moment?
Investors call it the 'Amazon of Construction'. Meet the builders of Infra.Market, the now $2.5 billion behemoth