As in all conflicts with roots in the Cold War and its aftermath, the subtext of any negotiation includes how the world's two largest nuclear-armed states manage their arsenals—and use them for leverage 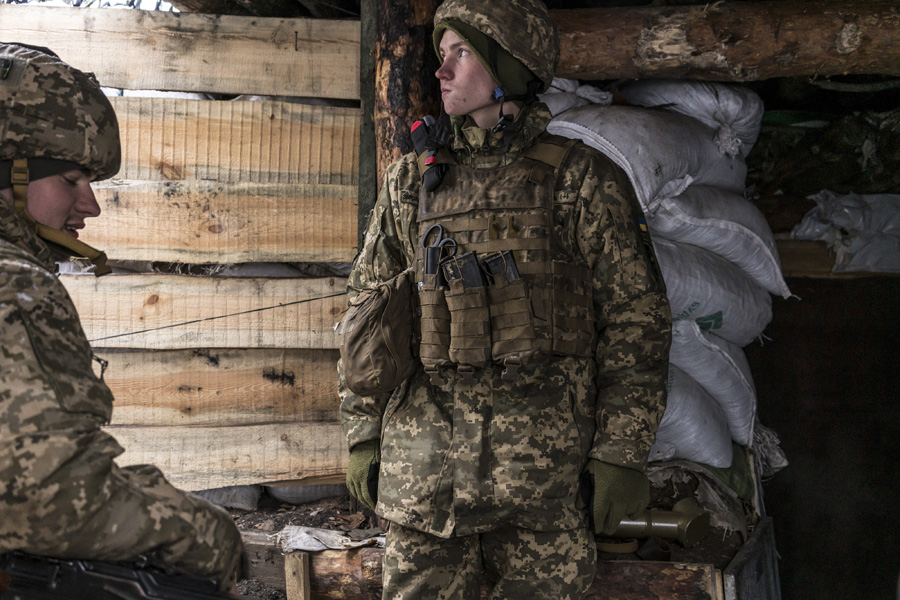 Ukrainian soldiers with the 24th Brigade in a trench on the front line in Popasna, Ukraine, Jan. 24, 2022. Fears of a Russian invasion of Ukraine are growing, but there are still diplomatic options, with the Biden administration and NATO expected to respond in the next several days to Russian President Vladimir Putin’s demands. (Brendan Hoffman/The New York Times)

WASHINGTON — Russian troops are encircling Ukraine from three sides. In Washington and Brussels, there are warnings of crushing sanctions if Vladimir Putin orders an invasion. Embassy families — both American and Russian — are being evacuated from Kyiv.

Yet there are still diplomatic options — “off-ramps” in the lingo of the negotiators — and in the next several days the Biden administration and NATO are expected to respond, in writing, to Putin’s far-reaching demands.

The question is whether there is real potential for compromise in three distinct areas: Russia’s demand for ironclad assurances that Ukraine won’t enter NATO; that NATO won’t further expand; and that Russia can somehow restore some approximation of its sphere of influence in the region to before the strategic map of Europe was redrawn in the mid-1990s.

The hardest issue of all defies negotiation: Putin’s demand that Ukraine reverse its “drift” toward the West. That is a matter of national sentiment, and polls show that in the years since Russia’s seizure of Crimea in 2014, Ukrainians are more desirous than ever of joining the Western alliance. Putin’s massing of the troops is likely to accelerate that trend, U.S. officials say, rather than reverse it.

And as in all conflicts with roots in the Cold War and its aftermath, the subtext of any negotiation includes how the world’s two largest nuclear-armed states manage their arsenals — and use them for leverage.

While there is still time to avoid the worst, even President Joe Biden’s top aides say they have no idea if a diplomatic solution, rather than the conquest of Ukraine, is what Putin has in mind. The Russian president views Ukraine not as a separate nation but as a land that was negotiated away after the collapse of the Soviet Union. Many who have dealt with Putin believe he now sees it as his mission to correct that error, even if that means risking war to redraw the map of Europe.

It is possible that Putin’s bottom line in this conflict is straightforward: that he wants to stop Ukraine from joining NATO and get an assurance that the United States and NATO will never place offensive weapons that threaten Russia’s security in Ukrainian territory.

On those two issues, it would seem, there is trading space. While the United States says it will never abandon the NATO “open door” policy — which means that every nation is free to make its own choice about whether it seeks to join the Western alliance — the reality is clear: Ukraine is so corrupt, and its grasp of democracy is so tenuous, that no one expects it to be accepted for NATO membership in the next decade or two.

On this, Biden has been clear.

“The likelihood that Ukraine is going to join NATO in the near term is not very likely,” he said at a news conference Wednesday, giving voice to a previously unspoken truth. “So there is room to work if he wants to do that.”

It seemed an open invitation to offer Russia some kind of assurance that, for a decade or maybe a quarter-century, NATO membership for Kyiv was off the table. But the Biden administration has drawn a red line at allowing Putin a right to veto which nations can join NATO.

To hear Putin, those weapons are more offensive than defensive — and Russian disinformation campaigns have suggested that Washington’s real goal is to put nuclear weapons in Ukraine. Administration officials say the United States has no such plans — and some kind of agreement should be, as one official said, “the easiest part of this,” as long as Russia is willing to pull back its intermediate-range weapons as well.

Putin has made clear that he wants to restore what he calls Russia’s “sphere of influence” in the region — essentially a return to the Cold War order, before Bill Clinton and Boris Yeltsin agreed in 1997 that former Soviet states and Warsaw bloc nations could choose whether to seek membership in NATO. Since then, the alliance has roughly doubled in size.

Putin also wants all nuclear weapons out of Europe, even though those weapons — mostly gravity bombs that have been stored in Germany, Turkey, Italy and Belgium — have been there for decades.

Asked Wednesday whether he would take those weapons out or stop troop rotations through the former Soviet bloc, Biden said, “No, there’s not space for that.”

Rose Gottemoeller, who negotiated New START, the last major nuclear accord with Russia, said at the Center for the National Interest on Monday that Putin’s demands were partly “a temper-tantrum effect” after years in which Putin’s grievances have, in his view, never been taken seriously.

So is there room for negotiation? Perhaps there is, Gottemoeller said. She noted that Putin “cares about summitry with Biden,” which suggests that the two men might, ultimately, come to some kind of broader understanding about Europe’s future. At a minimum they could address the nuclear issues by reviving the Intermediate Nuclear Forces agreement, which Putin violated for years and President Donald Trump scrapped.

And the United States has suggested reviving an old agreement that would limit military exercises, prescribe how far away from borders they needed to be and reduce the fear that an “exercise” turns into an invasion.

The problem with this approach is that it sounds a lot like continuing the kind of grinding, incremental arrangements that have marked the post-Cold War era. And that is exactly the era Putin is trying to blow up.

If all these sound like quarter-century-old problems, well, they are. Which is why any new accords with Russia, to be truly effective, would have to embrace Russia’s turn toward deniable, hard-to-detect cyberweapons. As the Department of Homeland Security reminded private industry over the weekend, U.S. critical infrastructure, including the power grid, is laced with Russian-planted malware. So far, none has been triggered — and as a deterrent the United States has planted code in the Russian grid as well.

Such weapons do not lend themselves to arms control — they are hard to find and impossible to count. But no agreement with Russia that excludes them will address the constant, asymmetric battling that goes on between the two countries every day.

And then there is the problem that dominated the Cold War: nukes.

In the past week, Putin has been on the phone — not just to his old allies, but to the leaders of Venezuela, Nicaragua and Cuba. Some Russian news organizations have said the topics might be what Putin likes to call a “military-technical” response to the Ukraine crisis.

There have been hints from Russian officials about what that means: Russia could consider placing nuclear weapons back in the Western Hemisphere, within easy, short reach of U.S. cities. If that sounds familiar, it should. It was the core of the Cuban Missile Crisis in 1962, the closest the world came to annihilation during the Cold War.

Putin’s motivation is clear: If the United States won’t remove its weapons from Europe — even aging tactical weapons that need to be dropped from airplanes — he is determined to put U.S. cities at similar risk. So far, there is no evidence that he is doing anything but talking. But even the suggestion of it has revived old fears.