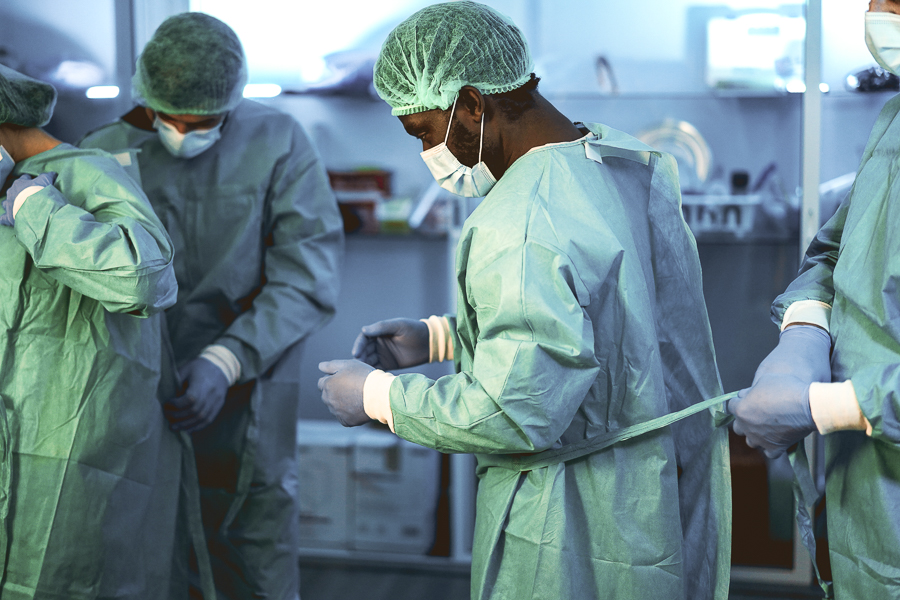 Canada is among numerous wealthy nations, including the United States and United Kingdom, that are aggressively recruiting medical workers from the developing world to replenish a health care workforce drastically depleted by the COVID-19 pandemic
Image: Shutterstock

LUSAKA, Zambia — There are few nurses in the Zambian capital with the skills and experience of Alex Mulumba, who works in the operating room at a critical care hospital. But he has recently learned, through a barrage of social media posts and LinkedIn solicitations, that many faraway places are eager for his expertise, too — and will pay him far more than the $415 per month (including an $8 health risk bonus) he earns now.

Mulumba, 31, is considering those options, particularly Canada, where friends of his have immigrated and quickly found work. “You have to build something with your life,” he said.

Canada is among numerous wealthy nations, including the United States and United Kingdom, that are aggressively recruiting medical workers from the developing world to replenish a health care workforce drastically depleted by the COVID-19 pandemic. The urgency and strong pull from high-income nations — including countries such as Germany and Finland, which had not previously recruited health workers from abroad — has upended migration patterns and raised new questions about the ethics of recruitment from countries with weak health systems during a pandemic.

“We have absolutely seen an increase in international migration,” said Howard Catton, CEO of the International Council of Nurses. But, he added, “The high, high risk is that you are recruiting nurses from countries that can least afford to lose their nurses.”

About 1,000 nurses are arriving in the United States each month from African nations, the Philippines and the Caribbean, said Sinead Carbery, president of O’Grady Peyton International, an international recruiting firm. Although the United States has long drawn nurses from abroad, she said demand from American health care facilities is the highest she has seen in three decades. There are an estimated 10,000 foreign nurses with U.S. job offers on waiting lists for interviews at American embassies around the world for the required visas.

Since the middle of 2020, the number of international nurses registering to practice in the United Kingdom has swelled, “pointing toward this year being the highest in the last 30 years in terms of numbers,” said James Buchan, a senior fellow with the Health Foundation, a British charity, who advises the World Health Organization and national governments on health worker mobility.

“There are 15 nurses in my unit and half have an application in process to work abroad,” said Mike Noveda, a senior neonatal nurse in the Philippines who has been temporarily reassigned to run Covid-19 wards in a major hospital in Manila. “In six months, they will have left.”

As the pandemic enters its third year and infections from the omicron variant surge around the world, the shortage of health workers is a growing concern just about everywhere.

The British government introduced a “health and care visa” program in 2020, which targets and fast tracks foreign health care workers to fill staffing vacancies. The program includes benefits such as reduced visa costs and quicker processing.

Canada has eased language requirements for residency and has expedited the process of recognizing the qualifications of foreign-trained nurses. Japan is offering a pathway to residency for temporary aged-care workers. Germany is allowing foreign-trained doctors to move directly into assistant physician positions.

In 2010, the member states of the WHO adopted a Global Code of Practice on the International Recruitment of Health Personnel, driven in part by an exodus of nurses and doctors from nations in sub-Saharan Africa ravaged by AIDS. African governments expressed frustration that their universities were producing doctors and nurses educated with public funds who were being lured away to the United States and Britain as soon as they were fully trained, for salaries their home countries could never hope to match.

The code recognizes the right of individuals to migrate but calls for wealthy nations to recruit through bilateral agreements, with the involvement of the health ministry in the country of origin.

In exchange for an organized recruitment of health workers, the destination country should supply support for health care initiatives designated by the source country. Destination countries are also supposed to offer “learn and return” in which health workers with new skills return home after a period of time.

But Catton, of the international nurses organization, said that was not the current pattern. “For nurses who are recruited, there is no intention for them to go back, often quite the opposite: They want to establish themselves in another country and bring their families to join them,” he said.

Dr. Brian Sampa, a general practitioner in Lusaka, recently began the language testing that is the first step to emigrate to the United Kingdom. He is the head of a doctors union and vividly aware of how valuable physicians are in Zambia. There are fewer than 2,000 doctors working in the public sector — on which the vast majority of people are reliant — and 5,000 doctors in the entire country, he said. That works out to 1 doctor per 12,000 people; the WHO recommends a minimum of 1 per 1,000.

Twenty Zambian doctors have died of COVID-19. In Sampa’s last job, he was the sole doctor in a district with 80,000 people, and he often spent close to 24 hours at a time in the operating theater doing emergency surgeries, he said.

The pandemic has left him dispirited about Zambia’s health system. He described days treating critically ill COVID-19 patients when he searched a whole hospital to find only a single C-clamp needed to run oxygenation equipment. He earns slightly less than $1,000 a month.

“Obviously, there are more pros to leaving than staying,” Sampa said. “So for those of us who are staying, it is just because there are things holding us, but not because we are comfortable where we are.”

Tweets by @forbesindia
War may loom, but are there off-ramps?
Will insurance improve cyber-security practice for businesses?