Across the world, Covid anxiety and depression take hold—again

Uncertainty bedevils plans. Panic spreads in an instant even if, as with the omicron variant, the extent of the threat is not yet known. Vaccines look like deliverance until they seem a little less than that 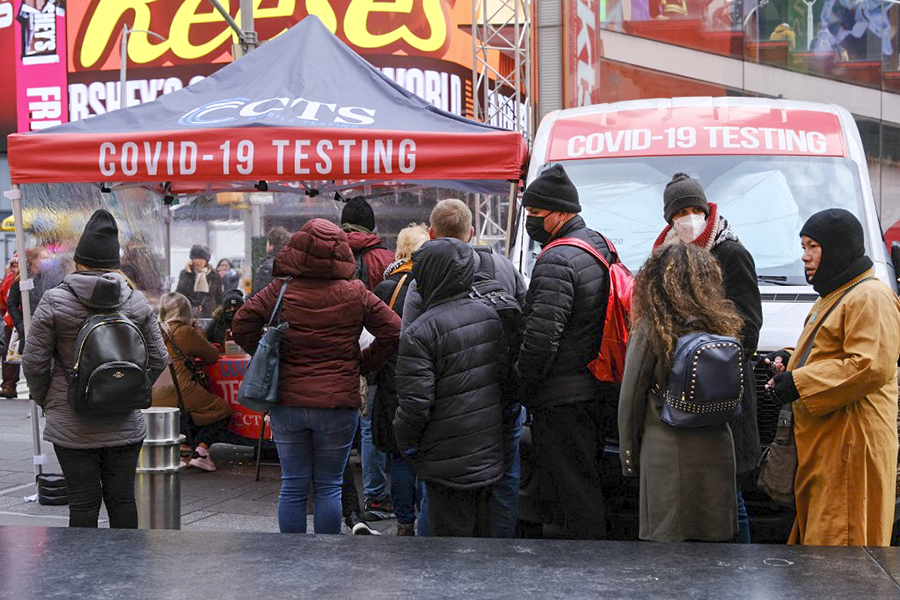 People wait in line to get tested for COVID-19 at a testing facility in Times Square on December 09, 2021 in New York City. As the fast-spreading new Omicron variant of COVID-19 has been detected in at least 19 states, health officials are urging Americans to get vaccinated and receive their booster shots.
Image: Spencer Platt/Getty Images/AFP

PARIS — A recent cartoon in the French daily Le Monde featured a bedraggled man arriving at a doctor’s office for a COVID-19 vaccine. “I am here for the fifth shot because of the third wave,” he says. “Or vice versa.”

His bewilderment as France suffers its fifth wave of the pandemic, with cases of the delta variant rising sharply along with omicron anxiety, captured a mood of exhaustion and simmering anger across the world two years after the deadly virus began to spread in China.

Uncertainty bedevils plans. Panic spreads in an instant even if, as with the omicron variant, the extent of the threat is not yet known. Vaccines look like deliverance until they seem a little less than that. National responses diverge with no discernible logic. Anxiety and depression spread. So do loneliness and screen fatigue. The feeling grows that the COVID era will go on for years, like plagues of old.

Even in China, with no reported COVID deaths since January, some confess weariness with the measures that have kept them safe when so many others perished.

“I’m so tired of all these routines,” Chen Jun, 29, a tech company worker in the southern Chinese city of Shenzhen, said the other day. He was forced to take three COVID-19 tests in June following an outbreak in the city, and then had to quarantine for 14 days. Thumbtacks he used to pin on a world map to trace his travels have stopped multiplying. “I’m starting to think we’ll never see an end to the pandemic.”

This sense of endlessness, accompanied by growing psychological distress leading to depression, was a recurrent theme in two dozen interviews conducted in Asia, Europe, Africa and the Americas. After two years of zigzagging policy and roller-coaster emotions, terrible loss and tantalizing false dawns, closing borders and intermittently shuttered schools, people’s resilience has dwindled.

That is sure to pose new challenges for leaders trying to protect their people and their economies. Will the weary obey new restrictions, or risk seeing family and friends after months of forced separation? The question of just how draconian leaders can be when people’s mental health has become so fragile appears to be a core quandary as the pandemic enters its third year.

“I know it will only get worse, it won’t stop, the pandemic will only turn more life-consuming,” said Natalia Shishkova, a teacher in Moscow. “It is all chaos, like a fantasy film. You watch all these apocalypse films and realize their writers were real prophets.”

Real progress in fighting the virus has been made. A year ago, vaccine rollouts were in their infancy. Today, about 47% of the world’s population is inoculated. If case numbers remain high, death rates have plunged. Yet life seems out of control.

The pandemic not only makes this month’s vacation or holiday celebrations seem uncertain, but also sometimes overwhelms understanding. How to assess the avalanche of statistics, opinions, warnings, closures, reopenings? What to make of the big business COVID-19 has become, with its vested interests? What to do about the glaring inequality in vaccine distribution? How to avert one’s gaze from the discarded masks that still dot streets, the pandemic’s perennial detritus?

Once linear, life now seems circular. Schools open. They close again. Travel becomes easier, only for new obstacles to arise. Sickness from COVID-19 subsides, to be replaced by long COVID and now indications that even those who have recovered from the virus might get reinfected with omicron. At the Paris laboratory of Maria Melchior, a French public health researcher who specializes in mental illness, in-person meetings had just been reinstated when, this week, she was told they would cease, with a return to Zoom gatherings.

“We no longer know when we will get back to normal,” Melchior said. And what is normal now? She paused. “Well, at least a life without masks.”

In Kenya, with infections declining in October, President Uhuru Kenyatta lifted a long-standing curfew. Bars filled. Musicians lined up concert dates, as they have in many parts of the world, where theaters and opera houses have reopened. Spirits rose.

Then, the omicron variant hit. Even before any cases were reported there, Kenya’s leaders announced plans to bar unvaccinated people from offices and warned of new holiday-season restrictions.

Corrie Mwende, a communications specialist in Nairobi, said she had felt like “freedom was coming back” after a long period when “you could say it was like the end of the world.”

Today she is unsure her hope will be fulfilled.

Such hesitation is pervasive. The pandemic began with evasiveness from the great powers of the 21st century, first President Xi Jinping’s China and then President Donald Trump’s America. Trust was dented, time lost. Ever since, a cohesive global response has appeared elusive.

China has pursued a zero COVID policy, virtually shutting its borders and deploying mass-testing, snap lockdowns and high-tech contact tracing. At the other extreme, Russia, despite a high rate of deaths, has done little to restrict movement.

The 27-nation European Union is split over whether to make vaccines obligatory, and policies vary widely: soccer stadiums are empty again in Germany, where infection rates have surged, but full in France, where they have, too, but a presidential election looms in four months.

Britain, under Prime Minister Boris Johnson, has veered between herd immunity temptations and the kind of periodic restrictions now in force again to combat the omicron variant.

In Brazil, whose president, Jair Bolsonaro, has persistently minimized the pandemic’s threat, the death toll has plunged to fewer than 300 a day from 3,000 in April. Samba concerts are back in the streets. Fireworks, after some back-and-forth, will light the sky over Copacabana beach to mark the New Year — unless some new disaster strikes.

Maybe that will be omicron; maybe not. Some other variants have come and gone without driving the pandemic to terrifying new heights.

For now, every plan is a provisional plan.

Conspiracy theories abound, in part because the pandemic has enriched the wealthy as markets have soared, and punished those without investments.

Yakov Kochetkov, head of the Center for Cognitive Therapy in Moscow, said, “In Russia there has been a strong increase in mistrust of vaccines, even the term ‘pandemic’ itself. This greatly affects the psyche.”

Just this month, a 45-year-old man reported to view the pandemic as a conspiracy opened fire at a Russian government office and killed two people after being told to put on a mask.

In Italy, hit to devastating effect early in the pandemic, access to everything from movie theaters to offices has been strictly curtailed for anyone who does not have the “green pass” of the vaccinated. The government is promising a “semi-normal” Christmas without the need to resort to lockdowns. Still, the mood of the country is somber.

Massimiliano Valerii, the director general of CENSIS, a Rome-based research group, observed that the pandemic had exacerbated anxieties about the future. “The social ladder has been blocked, the mechanism for being able to improve one’s position in life,” he said.

David Lazzari, the president of Italy’s psychologists’ guild, said recent studies in Italy showed the incidence of anxiety and depression had doubled since the pandemic began. For those under 18, levels had reached 25%. “One in four,” he noted. “That’s very high.”

Among adolescents and young adults — stuck on their screens, often unable to date over the past two years, inundated with online friends but short of actual contact — anorexia and bulimia have spread, said Melchior, the French public health researcher who focuses on mental illness.

Chanel Contos, 23, an Australian student in London who is uncertain whether she will be able to fly home this month, expressed acute frustration at having been told that “once we had adequate vaccines in the country you’re in, things would be OK.”

She asked a question frequently heard among her generation: “How much of our lives can we give up for this?”

Governments are acutely aware of this frustration. Nicolas Franck, a French psychiatrist, said, “We fell short initially, now we are in the phase of excess precaution.”

“People are so exhausted their greatest fear is not so much a new variant, but a new curfew,” he added.

Tweets by @forbesindia
Innovation is everyone's business
Storyboard18: Do you need a degree or just YouTube to be a marketer today?