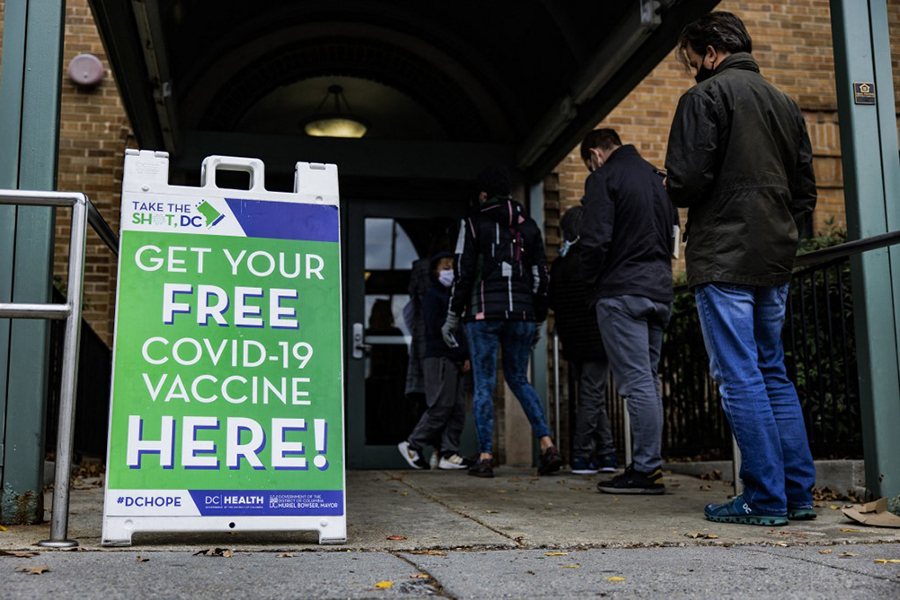 People line up outside of a free COVID-19 vaccination site that opened today in the Hubbard Place apartment building on December 3, 2021 in Washington, DC. The DC Department of Health is stepping up vaccination and booster shots as more cases of the Omicron variant are being discovered in the United States.   Samuel Corum/Getty Images/AFP (Photo by Samuel Corum / Getty Images North America / Getty Images via AFP)

As the emergence of the omicron variant of the coronavirus has spurred governments of wealthy nations to step up booster-shot campaigns, the World Health Organization again expressed concern Thursday that the push could further undermine global vaccine equity.

The administration of boosters is now outpacing first shots around the world.

Richard Mihigo, coordinator for the WHO’s Immunization and Vaccines Development Program in Africa, said: “If we looked at the data today, even before omicron, we are seeing high-income countries administering more booster doses than even vaccines that are being given in developing countries.”

Because most current infections, which are still overwhelmingly being driven by the delta variant, are affecting unvaccinated people, the WHO said, getting vaccines to those who have no protection should be the priority.

“Remember that we only have 8% — 8% — of people who have been fully vaccinated in this region,” Mihigo said of Africa. “This represents around 103 million people in a continent of 1.3 billion.”

The WHO’s reticence on boosters has put it out of step with governments around the world. Data from both Israel and Britain has shown that an extra vaccine dose can sharply lower a person’s likelihood of catching the coronavirus and getting sick, leading many countries to expand their booster programs.

The WHO advisory group said Thursday that preliminary data has suggested that extra shots could be useful if administered to older or immunosuppressed people. However, Mihigo said that, at the moment, there appeared to be “very little benefit of the booster dose for the younger population.”

Now scientists are racing to understand how omicron might affect the pandemic and to determine the effectiveness of vaccines in combating its spread and preventing serious illness and death.

Pfizer and BioNTech said Wednesday that laboratory tests suggested a booster shot of their coronavirus vaccine offered significant protection against the fast-spreading variant.

While limited in scope, the findings provided a bit of hopeful news at a time of renewed uncertainty. Blood samples obtained from people who had received a booster shot contained antibodies neutralizing omicron at levels comparable with those combating the original variant after two doses, Pfizer’s statement said. While antibodies are the first line of defense against infection, they are only part of a wider-ranging and powerful response by the immune system. Because antibodies are the fastest and easiest part to measure, those results typically come first.

President Joe Biden called Pfizer’s data “encouraging,” adding on Twitter, “This reinforces what my medical advisors have been emphasizing: that boosters give you the highest protection yet.”

The WHO has cautioned about the risks that booster campaigns present as tens of millions in lower-income countries have not had access to a single dose.

Dr. Kate O’Brien, the WHO’s vaccine director, said that in the face of the omicron variant, there was a risk that wealthy countries would go back to hoarding vaccine supplies.

But Andrea Taylor, who tracks vaccine production for the Duke Global Health Innovation Center, said that while it was hard to know the true status of vaccine supply and delivery because of a lack of transparency, booster campaigns should not significantly affect supplies for lower-income countries.

“Globally, we are producing a staggering 1.5 billion doses a month, and we theoretically have enough doses now to provide boosters across wealthy countries, as well as first and second doses to at least 40% of the population in other countries,” she said. “In reality, however, these doses are not where they need to be.”

“Too many of them are sitting unused in wealthy countries,” she said, adding that estimates showed that the world’s wealthiest nations would have about 770 million excess doses on hand at the end of this month.

O’Brien noted that efforts by wealthy countries to donate surplus vaccines had been threatened because the doses they were offering have a relatively short shelf life.

Many poorer countries, especially in Africa, are finding they do not have the capacity to get shots in arms before they expire.

Tweets by @forbesindia
Amazon fined $1.3 billion over antitrust violations in Italy
Photo Of The Day: Humans against rights violation