The flights, like the cruise ships of the early pandemic, have prompted fears of superspreader events and raised concerns about lessons unlearned 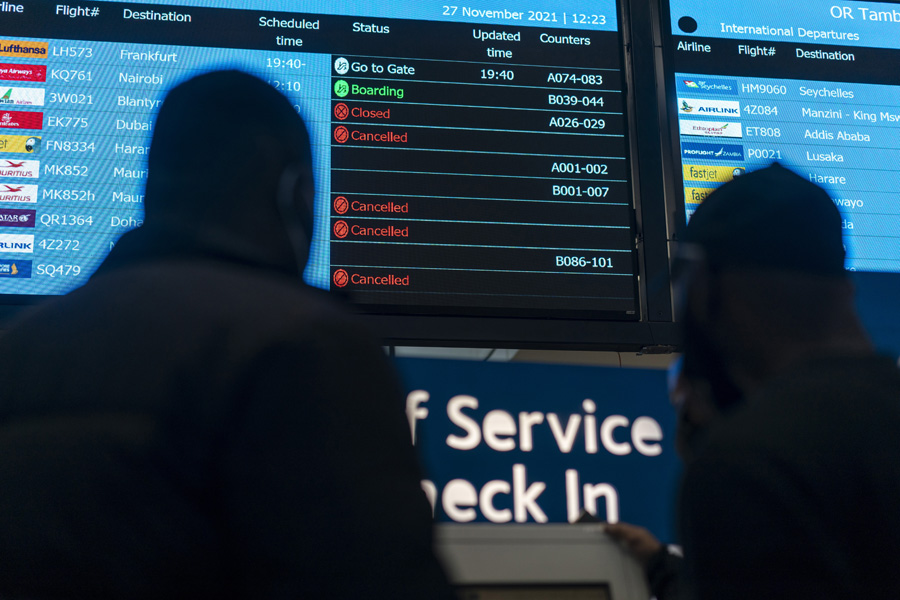 Flights to numerous destinations were cancelled at O.R. Tambo International Airport in Johannesburg, Nov. 27, 2021. A confounding array of Covid rules and lax enforcement of mask wearing may have sent infected passengers on two KLM flights from South Africa into ‘who knows where.’ (Joao Silva/The New York Times)

For the hundreds of passengers traveling from South Africa to Amsterdam on Friday, flight KL592 had all the trappings of international travel in the COVID era.

They came armed with paperwork proving their eligibility to fly, and check-in agents sifted through a bewildering assortment of requirements determined by final destination. Some countries, like the United States, required vaccinated travelers to show negative test results. Others didn’t. On the long flight, only some wore masks, passengers said, as flight attendants often let the slipping masks slide.

But while the flight was en route, and the passengers slept or watched their screens, everything changed on the ground.

Panic about the new omicron variant that had been discovered in southern Africa prompted countries to close their borders. The arrivals descended into a new post-omicron reality, and it was a hellish one, with hours spent breathing stale air as their planes sat on the tarmac, then fighting exhaustion in crammed waiting rooms, awaiting swab results in close quarters with fellow travelers who would turn out to be infected with the new and possibly more dangerous variant.

“We were in the same place, the same room,” said one passenger, Jan Mezek, 39, a laboratory technician whose company services swab-test machines and who was returning from a two-week work trip to his home in Prague. “I felt like a pig in a pen,” he said, adding “they were completely spreading the virus around us.”

Of the more than 60 people on that and another KLM flight from South Africa who tested positive for the virus, at least 14 had omicron, according to Dutch officials. The Dutch authorities have quarantined them — and arrested a couple who had tried to break out and fly to Spain — while requiring the hundreds who showed negative results from the PCR test administered at the airport to go home or board connecting flights to their final destinations.

“They went around the world, who knows where,” said Fabrizio Pregliasco, a prominent Italian virologist at the University of Milan. He said that all the passengers should have been quarantined or isolated and monitored closely for seven to 10 days, especially because they could have caught the virus on the flight and tested negative as it incubated.

“If this variant is very contagious, this flight is an explosive bomb,” Pregliasco said.

The flights, like the cruise ships of the early pandemic, have prompted fears of superspreader events and raised concerns about lessons unlearned. But they are also emblematic — with the varying testing and quarantining criteria, the inconsistent mask-wearing and confusion over contact tracing — of the scattershot global response, and often lax enforcement, that may worsen a possibly more infectious stage of the pandemic.

The omicron variant, though designated “very high” risk by the World Health Organization, is still an unknown variable. It will probably take weeks to know if it amounts to an overblown scare or a highly contagious new mutation with the ability to dodge the vaccines and potentially plunge the world back into lockdowns, packed hospitals and unattended funerals.

The security conferred by the vaccines and by planes with air filtration systems led the United States to open up to European Union travelers and other nationalities earlier this month, allowing for embraces, tears and giddy reunions long denied. But European countries had different rules from those in the United States — and often from one another — about the testing and self-isolation criteria required for vaccinated people to board a flight. The result was an often shifting patchwork of regulations by countries.

The rules for any given passenger on any given flight are generally determined by that person’s final destination country, said Karen Grépin, a professor at the School of Public Health at the University of Hong Kong, who has been studying travel rules during the pandemic. Countries and often airlines have their own testing requirements, and transferring passengers sometimes have to meet still different criteria.

But all that confusion and agita may soon seem like the good old days, when travel, if confounding, was at least possible.

After the emergence of the omicron variant in Africa last week, the United States and the European Union and other nations banned flights from southern Africa. Israel and Morocco slammed their doors on the world. Australia, Japan and other countries postponed opening up and joined China, which has adopted a fortress mentality as it seeks to vanquish the virus at home altogether.

For all the focus on the flights to the Netherlands, positive cases of omicron have already emerged in several countries, and public health experts consider its emergence everywhere inevitable.

A vaccinated Italian, who has not been publicly identified, returned from business in Mozambique earlier in November to the southern town of Caserta. He said on Italian radio that he had tested negative before boarding his flight on Nov. 11, as was required by Italy. Since he was traveling for work, he did not, per Italian rules, have to self-isolate upon return.

It was only during a medical checkup in Milan, where he also underwent a Covid test so that he could return to Mozambique, that he tested positive for the coronavirus, and then, amid the heightened attention to the new variant, for omicron. Now he and his wife and children, who are also positive for the virus, are in isolation, all for now with light symptoms.

On Tuesday, KLM, the airline which operated the two flights Friday from South Africa, apologized to passengers. But Marjan Rozemeijer, a spokeswoman for the company, suggested it had been just as caught off guard by the variant as anyone.

Upon the landing of the flights at Schiphol Airport, she said, the company was “asked by the Dutch government to park our aircrafts in a particular location so that all passengers could be tested,” and added that the airport and the Dutch public health authorities had organized and performed the testing.

A spokesman for the Dutch public health service, by contrast, said it had gone above and beyond in its efforts and saw nothing wrong with letting the passengers who had tested negative for the virus proceed on their journeys.

Mezek, who is vaccinated and tested negative, said he had received a call from the Dutch public health service on Saturday, and then an email imploring him to stay home and supply it with his travel details after leaving the Netherlands. “It is important to know your whereabouts, so that health departments in various countries can contact the transfer passengers, to prevent further spreading” of the omicron variant, according to an email shown to The Times and verified by the health agency.

It added that he should be tested again for COVID five days after the South Africa-to-Amsterdam flight’s arrival. “Although you may not currently have any symptoms, you could already be infectious.”

Mezek said he was in isolation, and had already received a call from the Czech authorities on Monday making sure he was staying put, and not sick. But he noted that if he had made his original connection, and landed a day earlier, before the Czech Republic tightened its rules, he would be at work and at home with his children and wife, a teacher.

“I wouldn’t have been in isolation,” he said.

Tweets by @forbesindia
Photo Of The Day: Pay by a click
Slam Dunk: Can Rajan Bajaj grab a big slice of the fintech pie?