In the absence of more hard information, governments have reacted to omicron with sharp restrictions on international travel and new vaccination requirements 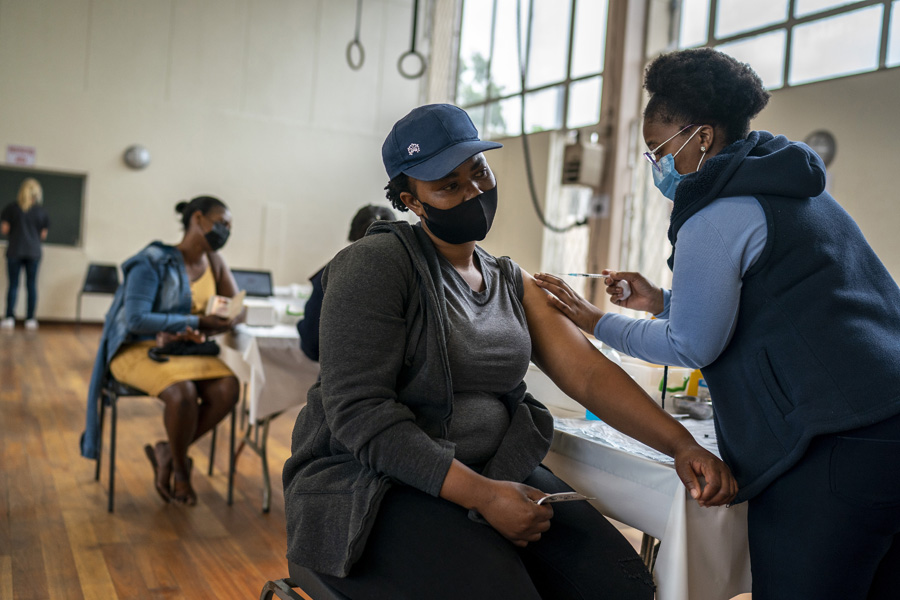 A coronavirus vaccination site in Johannesburg on Dec. 2, 2021. The COVID-19 virus is spreading faster than ever in South Africa, the country’s president said Monday, Dec. 6, 2021, an indication of how contagious the new omicron variant is, but there are early indications that it may be less serious than other forms of the virus. (Joao Silva/The New York Times)

JOHANNESBURG — The COVID-19 virus is spreading faster than ever in South Africa, the country’s president said Monday, an indication of how the new omicron variant is driving the pandemic, but there are early indications that omicron may cause less-serious illness than other forms of the virus.

Researchers at a major hospital complex in Pretoria reported that their patients with the coronavirus are much less sick than those they have treated before, and that other hospitals are seeing the same trends. In fact, they said, most of their infected patients were admitted for other reasons and have no COVID symptoms.

But scientists cautioned against placing too much stock in either the potential good news of less severity, or bad news such as early evidence that prior coronavirus infection offers little immunity to omicron. The variant was discovered just last month, and more study is needed before experts can say much about it with confidence. Beyond that, the true impact of the coronavirus is not always felt immediately, with hospitalizations and deaths often lagging considerably behind initial outbreaks.

Dr. Emily Gurley, a public health researcher at Johns Hopkins Bloomberg School of Public Health, said of the signs that the variant is less severe, “It would not be shocking if that’s true, but I’m not sure we can conclude that yet.”

In the absence of more hard information, governments have reacted to omicron with sharp restrictions on international travel and new vaccination requirements. World leaders who were accused of responding too slowly or weakly earlier in the pandemic are eager to be seen as taking action, although some experts question whether the travel restrictions are an overreaction.

The variant has spread rapidly and has been detected in more than 30 countries on six continents so far. Health officials and researchers say that it could be the most contagious form of the virus yet and that it could soon displace the delta variant that emerged last year as the predominant form. That has fueled fears that a world eager to emerge from two years of pandemic hardship could be headed into another cycle of illness, lockdown and economic suffering.

In Europe, as in South Africa, there are early indications that omicron cases may be fairly mild, if easy to contract.

In Britain, the government said Monday that the number of omicron cases there had climbed to 336, 2 1/2 times as many as on Friday. Denmark reported 261 cases, quadruple the number on Friday, and local media there have reported that a holiday lunch for high school students may have been a superspreader event, with dozens of people catching the new variant.

Britain and Denmark do an unusually large amount of genomic sequencing of virus samples, to tell one variant from another and detect changes, which suggests that many omicron cases in other countries are simply going undetected.

On Monday, the United States began requiring international travelers arriving in the country to provide proof of a negative coronavirus test taken no more than 24 hours before their flights, a standard that can be hard to meet. Previously, fully vaccinated travelers could show negative test results taken up to 72 hours before departure.

China, a major part of the global travel and tourism economy, announced that to maintain its zero-COVID approach, it would keep international flights at 2.2% of pre-COVID levels during the winter. Since August, it has almost entirely stopped issuing new passports, and it requires arriving travelers to quarantine for 14 days and provide extensive paperwork and multiple virus tests.

In South Africa, where scientists say omicron is already dominant, the pandemic is surging once again. A month ago, South Africa had fewer than 300 new virus cases a day; on Friday and again Saturday, the figure was more than 16,000. It fell somewhat Sunday and Monday, but that may be because of a reporting lag often seen on weekends.

A report released this past weekend from doctors at the Steve Biko Academic and Tshwane District Hospital Complex in Pretoria, South Africa’s administrative capital, offers the strongest support yet for a more hopeful take on omicron, although its author, Dr. Fareed Abdullah, gave reasons to be wary of drawing conclusions.

Abdullah, director of the Office of HIV/AIDS and Tuberculosis Research at the South African Medical Research Council, looked at the 42 patients with coronavirus who were in the hospital Thursday, and found that 29 of them, 70%, were breathing ordinary air. Of the 13 using supplemental oxygen, four had it for reasons unrelated to COVID.

Only one of the 42 was in intensive care, in line with figures released last week by the National Institute of Communicable Diseases, showing that only 106 patients were in intensive care over the prior two weeks, despite the surge in infections.

Most of the patients were admitted “for diagnoses unrelated to COVID-19,” the report said, and their infection “is an incidental finding in these patients and is largely driven by hospital policy requiring testing of all patients.” It said that two other large hospitals in Gauteng province, which includes Pretoria and Johannesburg, had even lower percentages of infected patients needing oxygen.

Abdullah said in an interview that he had walked into a COVID ward and found a scene unrecognizable from previous phases of the pandemic, when it would have been full of the humming and beeping of oxygen machines.

Gurley, of Johns Hopkins, noted that the severity of disease reflects not just the variant but also who it is infecting. Two years into the pandemic, far more people have some level of immunity to the virus through vaccination, natural infection, or both, and that could translate to milder cases.

“We don’t know how to read the genetic sequences to say exactly how this variant will play out,” she said. “We’re getting more information now from South Africa, which is a particular population with a particular profile of preexisting immunity.”

Tweets by @forbesindia
Indian mutual funds' AUM jumps five-fold in 10 years to Rs 37.33 lakh crore in 2021
White Collar Crime and Commercial Litigation in India — What are the Challenges and What needs to Change By Anand Desai & Vikrant Singh Negi