Why China is the world's last 'zero Covid-19' holdout

Over the past few weeks, China has locked down a city of 4 million, as well as several smaller cities and parts of Beijing, to contain a fresh outbreak that has infected more than 240 people in at least 11 provinces and regions 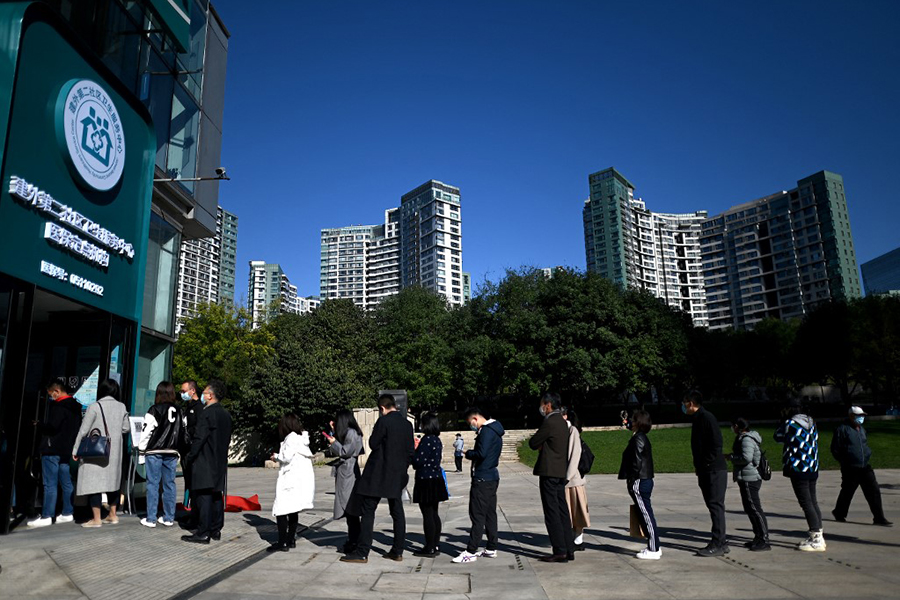 People queue to be tested for Covid-19 coronavirus at a nucleic acid collection station in Beijing on October 26, 2021. (Photo by Noel Celis / AFP)​

The trip began in Shanghai, where the couple, both former professors, joined a tour group of other retirees. They traveled through Gansu province and Inner Mongolia, staying at a bed-and-breakfast and eating three times at the same lamb chop restaurant. Flying south to Xi’an, they dropped into a 1,300-year-old temple. Their fellow tour group members checked out an art museum, strolled through parks and visited friends.

Then, on Oct. 16, the day they had planned to visit the Terracotta Warriors, the couple tested positive for the coronavirus.

Since then, China has locked down a city of 4 million, as well as several smaller cities and parts of Beijing, to contain a fresh outbreak that has infected more than 240 people in at least 11 provinces and regions. The authorities have shuttered schools and tourist sites. Government websites have detailed every movement of the unlucky couple and their sprawling web of contacts, including what time they checked into hotels and on which floors of restaurants they sat.

The no-holds-barred response is emblematic of China’s “zero COVID” policy, which has served the country remarkably well: China has reported fewer than 5,000 deaths since the pandemic began. The scale of the new outbreak, while tiny compared to many other countries, is large for China.

But the policy has also, increasingly, made China an outlier. The rest of the world is reopening, including New Zealand and Australia, which also once embraced zero tolerance. China is now the only country still chasing full eradication of the virus.

“Every locality should firmly adhere to the policy of ‘Defend externally against importation, defend internally against rebound,’ ” Mi Feng, a spokesperson for the National Health Commission, said at a news conference Sunday. “The current control measures cannot be relaxed.”

The government’s strict strategy is the product of a uniquely Chinese set of calculations. Its thriving exports have helped to keep the economy afloat. The ruling Communist Party’s tight grip on power enables lockdowns and testing to be carried out with astonishing efficiency. Beijing is set to host the Winter Olympics in February.

For many Chinese, the low case numbers have become a source of national pride. Xi Jinping, China’s leader, has repeatedly pointed to the country’s success in containment as proof of the superiority of its governance model.

But experts — both in China and abroad — have warned that the approach is unsustainable. China may find itself increasingly isolated, diplomatically and economically, at a time when global public opinion is hardening against it.

“The regime thinks it needs to maintain a ‘zero COVID’ policy to maintain its legitimacy,” said Lynette Ong, a political scientist at the University of Toronto. “At a huge cost, though.”

In the early phase of the pandemic, the Chinese Communist Party’s very hold on power seemed to hinge on its ability to control the virus. Its initial attempts to cover up the outbreak in Wuhan gave rise to a stunning outpouring of public anger. Images of overwhelmed hospitals and patients begging for help flooded the Chinese internet.

As the virus barreled across the rest of the world, that narrative changed. China’s strict lockdowns and mass testing campaigns, once criticized as heavy handed, became models for other countries. As deaths mounted in western democracies, Xi repeatedly emphasized how quickly China had flattened its caseload. Outrage about the initial response to Wuhan gave way to at-times strident nationalism.

Other countries that adopted “zero COVID” policies were hailed as models of competent governance that prioritized saving lives over convenience and economic growth.

As the virus has dragged into its second year, and with the onset of the far more contagious delta variant, countries are again reconsidering their strategies. Australia, which was home to the world’s longest lockdown, is scrapping quarantine requirements for vaccinated residents returning from overseas. New Zealand formally abandoned its quest for zero this month. Singapore is offering quarantine-free travel to vaccinated tourists from Germany, the United States, France and several other countries.

China has refused to change tack. When Zhang Wenhong, a prominent infectious disease expert from Shanghai, suggested this summer that China learn to live with the virus, he was attacked viciously online as a lackey of foreigners. A former Chinese health minister called such a mindset reckless.

There are also more practical reasons for China’s hesitation. Medical resources are highly concentrated in big cities, and more remote areas could quickly be overwhelmed by an uptick in cases, said Zhang Jun, an urban studies scholar at the City University of Hong Kong.

In addition, though China has achieved a relatively high full inoculation rate, at 75% of its population, questions have emerged about the efficacy of its homegrown vaccines.

And, at least for now, the elimination strategy appears to enjoy public support. While residents in locked-down areas have complained about seemingly arbitrary or overly harsh restrictions on social media, travel is relatively unconstrained in areas without cases. Wealthy consumers have poured money into luxury goods and fancy cars since they’re not spending on trips abroad.

“As long as they can still feel a certain level of freedom of mobility, I think that kind of COVID-zero policy doesn’t strike the domestic audience as too severe,” Zhang said.

Other governments that have chosen to live with the virus may yet lose their nerve. After lifting many restrictions this summer, Singapore reinstated them in September amid a spike in infections. (Still, the government is moving forward with travel lanes.)

But experts agree that the costs of expecting zero cases will hit eventually. China’s economic growth is slowing, and domestic travel during a weeklong holiday earlier this month fell below last year’s levels, as a cluster of new cases spooked tourists. Retail sales have proven fitful, recovering and ebbing with waves of the virus.

The country may also suffer diplomatically. Xi has not left China or received foreign visitors since early 2020, even as other world leaders prepare to gather in Rome for a Group of 20 summit and Glasgow for climate talks.

China’s hard-nosed approach is also trickling down to Hong Kong, the semi-autonomous territory and global financial hub. In trying to align their own COVID prevention policies with the mainland’s, Hong Kong’s leaders have introduced the world’s longest quarantine, ignoring escalating warnings from business leaders about an exodus of foreign firms.

And even those supportive of the restrictions wonder whether there is an exit strategy.

“I think the current policies are still in the right direction,” said Jason Qiu, 27, who grew up in Gansu province, not far from Lanzhou, the city of 4 million now under lockdown. “But if things go on like this for a long time — for example if the pandemic is going to continue for another five or 10 years, or become endemic — maybe it would be time to consider changing some measures.”

Tweets by @forbesindia
Photo Of The Day: Facebook Inc is now Meta
Never seen anything like it': Astronaut on 2021 climate disasters