Crack down hard, or wait and see? Europe splits on Omicron response

In all the countries, economic and political concerns are also guiding governments, amid uncertainty about just how big a risk the variant poses

By Norimitsu Onishi and Nicholas Casey 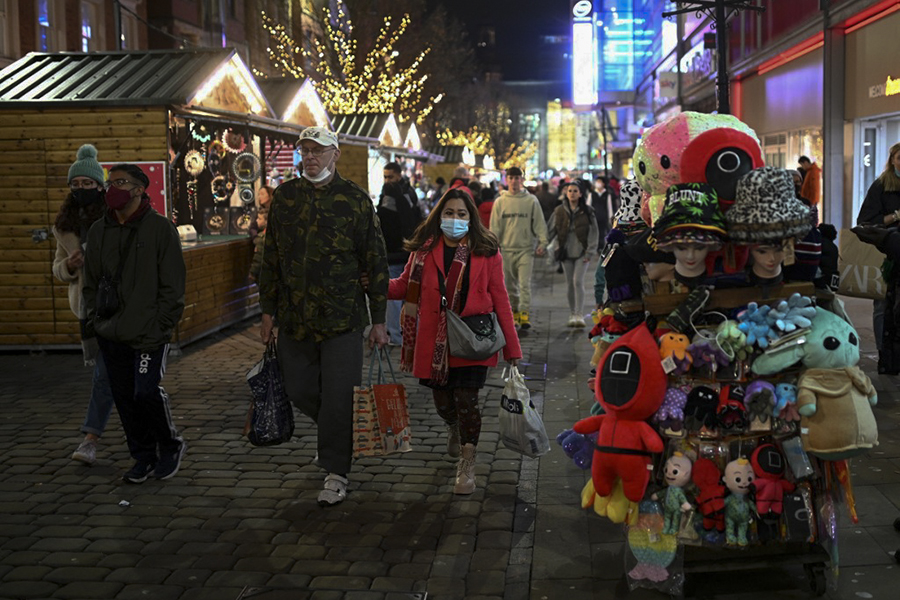 Shoppers, some wearing face coverings to combat the spread of Covid-19, walk past stores on the Monday before Christmas in Manchester in north-west England on December 20, 2021. - The UK Government on Monday faced pressure to tighten coronavirus restrictions to prevent the spread of the Omicron variant, despite opposition to do so before Christmas.
Image: Oli Scarff / AFP

PARIS — The Dutch can now invite only two guests to their homes as part of a new lockdown. In Denmark, where masks and other social restrictions had all but disappeared thanks to a successful vaccination campaign, cinemas, amusement parks, zoos and other establishments are closed once again.

By contrast, France has ruled out lockdowns, curfews or closures on a continent where new COVID-19 rules are being announced every day in the face of the omicron variant’s rapid spread. “The French exception,” the front page of one newspaper, Le Parisien, said Monday.

For now, France — as well as Spain and, to a lesser extent, Italy — is betting that high vaccine and booster coverage, along with earlier restrictions it put in place, will be enough to keep the coronavirus variant manageable, adopting a wait-and-see attitude as a sense of urgency grips the Netherlands, Denmark and Britain.

The numbers show why.

In London, the number of COVID cases rose by 30% last week, and the mayor declared a “major incident” — an emergency status that frees up resources. Denmark is now recording more than 9,000 new cases daily, one of the highest infection rates in the world. And the Netherlands became the first country in Europe to return to a full lockdown amid fears that its relatively low number of intensive care unit beds would be overwhelmed.

Spain, Italy and France all have lower COVID cases per 100,000 people than some of their northern neighbors, at least for now.

Governments are accelerating booster shots as the scientific evidence accumulates that two vaccine doses are insufficient to stop infection, though the vaccines appear to reduce the risk of hospitalization and serious illness. The United States is carefully watching Britain and Denmark for clues of what might happen at home, since both countries are good at tracking variants.

In France, the government said that omicron was now estimated to have caused hundreds of cases and that it would be the dominant variant by early next month. An average of 52,471 coronavirus cases per day were reported in France in the past week, according to a New York Times database, up 23% from the average two weeks ago.

The government of President Emmanuel Macron has encouraged vaccinations by issuing health passes to people who receive shots and has managed to keep schools and most establishments open. More than 70% of the French population has received two doses, though some 6 million have yet to receive a single shot.

Fresh restrictions would chip away at that success just four months before presidential elections.

The government is focused on tightening restrictions on unvaccinated people in the new year by making France’s health pass contingent on getting vaccinated. Currently, people can also obtain a pass with a recent negative COVID test.

The government has also shortened the wait before people can receive a booster shot to four months, from five. So far, about 17.5 million people have had boosters, or about 36% of the population that had received two doses.

“It’s annoying, but this year there’s at least more of a Christmas spirit than last year, when we had a curfew,” said Sherryline Ramos, a student in communications who was strolling with a friend along the Champs-Élysées in Paris. “We couldn’t go out and enjoy Christmas decorations.’’

In Spain, there has also been little appetite to return to the restrictions that became common during previous waves of the virus. Such a move, before the Christmas holiday, is considered both politically and economically treacherous.

Last week, officials raised the country’s alert level, and they now report 50 infections per 100,000 people, the steepest rate in months. But Monday, Prime Minister Pedro Sánchez signaled a wait-and-see approach, noting that hospitalizations remained lower than elsewhere in Europe and that the vaccines appeared to be doing their job.

“With notably higher contagion figures, we have lower hospitalization and intensive care occupation than a year ago,” he said. “The first conclusion is that vaccination works and that this health crisis can only be stopped by science.”

Medical experts agree that Spain’s high vaccination rates have set it apart from other European countries. More than 80% of the country is fully vaccinated.

But some in the public health community expressed reservations about the government’s current approach. Rafael Vilasanjuan, policy director of ISGlobal, a public health think tank in Barcelona, said that as countries in northern Europe move urgently to try to slow the variant, Spain could be losing valuable time in getting ahead of it.

In Italy, the government is considering imposing new measures amid concerns over omicron, but Prime Minister Mario Draghi said Monday that a final decision had not been made.

The government has made the vaccination campaign a national priority.

In the Netherlands, concerns over omicron’s effects on the health care system pushed the government over the weekend to order the closure of all but essential businesses until the second week of January. The number of guests allowed into people’s homes was limited to two, though four will be allowed on Christmas and New Year’s Eve.

Michel de Blaeij, 33, who lives in Terneuzen, a city in the south of the Netherlands, said he supported the measures, but he was critical of what he considers the government’s lack of clarity and consistency. The government’s decision to send schoolchildren home on Christmas vacation a week early had left many parents scrambling, he said.

“You just don’t know where you stand,” he said, adding, “The general mood is frustration right now.”