By reducing levies on petrol and diesel, the government has signalled a clear intent to fight inflation through tax cuts. Power, fertiliser and CNG prices will be closely watched 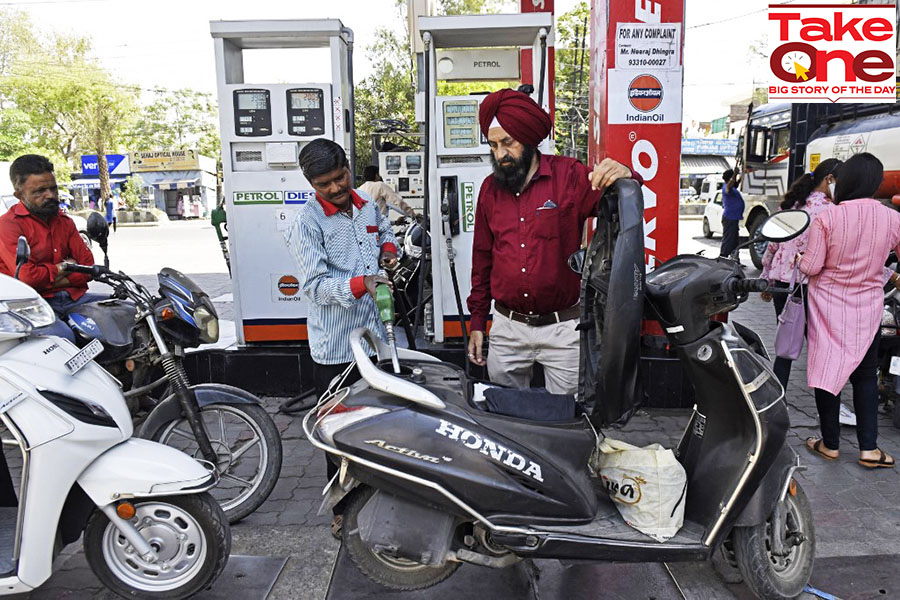 An announcement of a duty cut on petrol and diesel on Saturday made it clear which side the government is on—cut duties and risk a dent in government finances while keeping inflation in check. Image: Narinder Nanu / AFP

Over the last quarter, rising energy prices had put policymakers in a dilemma: Raise them and risk an upsurge in inflation or cut them and risk a dent in government finances.

An announcement of a duty cut on petrol and diesel on Saturday made it clear which side the government is on—cut duties and risk a dent in government finances while keeping inflation in check. With this, it is unlikely that the full extent of rising petrol and diesel prices will be passed on. Several states also moved to cut levies.

While it’s still early days in the government’s move to keep prices under control (and a tax cut could be one of the many strategies it adopts), what’s clear is that a repeat of an extended period of high prices like 2011-14 is what policymakers want to avoid at all cost. Once inflation gets out of hand and inflation expectations become entrenched, it becomes that much harder to fight.

Since fuel levies were cut on May 21, an export duty on steel has been introduced and an annual limit of 10 million tonnes on sugar exports imposed to keep domestic prices under check. Wheat exports were also banned this month as the war in Ukraine is expected to result in a global shortage. 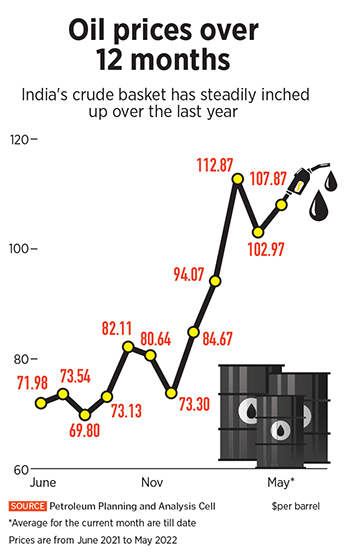 In India’s energy basket, key to watch will be power, fertiliser and CNG prices. It’s still unclear how relief will be provided for them and who will pay the bill.

Consumer price inflation at 7.7 percent and rising interest rates globally have meant that it’s likely that Indian rates will also move up in the next 12 months. Bond yields have moved from 6.9 to 7.35 percent in the last two months pricing in at least 125 basis points of monetary tightening.

“Given that interest rates are going to rise, if you want to forestall the recovery from getting derailed, the government has to come up with some kind of a fiscal stimulus and cutting fuel taxes is a relatively good way of doing it because then you are addressing both the inflation problem and giving a fiscal stimulus,” says Pronab Sen, former chief statistician of India.

Fuel and electricity make up 16 percent of the consumer price index but a fuel price cut also feeds into transportation costs, and that has an impact in keeping prices low. In the last 12 months, the Indian crude basket has moved up from $71 per barrel to $107. Crisil estimated that withoil prices in the $85-90 range, the current account deficit would be 2.4 percent of the GDP. At $90-100, that would rise by 50 bps.

CNG, the other key transportation fuel, has seen prices go up as natural gas prices under the administered pricing mechanism were raised 110 percent to $6.1/mmbtu. As its adoption becomes more widespread, this would start feeding into inflation as well. City gas distribution companies have passed on the increase to industrial users but have gone slow on passing them on to transport users. 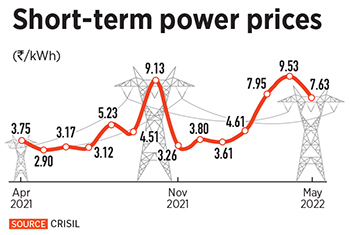 Another key area is power. “With an increase in demand, the government has asked some projects that run on imported coal projects to restart. In this case, the price will be passed on to the utility and they, with a lag, will pass it on to the consumer,” says Rahul Prithiani, senior director, energy, commodities and sustainability, Crisil. Prithiani believes the intent here would be to pass on tariffs but the manner in which it is done remains to be seen as there is often a lag between prices rising and utilities passing them on to consumers.

In May, short-term power prices moved to Rs 7 per unit from Rs 3 last November (see chart). It remains to be seen how state power utilities pass this on to end consumers as tariff revisions are usually done a year. Once again, industrial users may have to bear the brunt. Prithani believes the intent here would be to pass on tariffs but the manner in which it is done remains to be seen as there is a lag between prices rising and utilities passing them on to consumers. 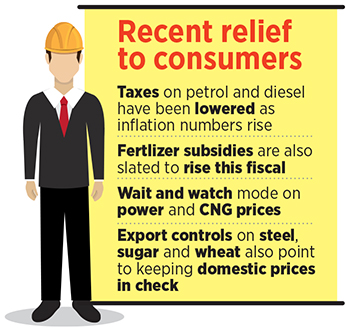 Lastly, there’s fertliser, where increasing input prices have necessitated a 55 percent increase in subsidy to Rs 250,000 lakh crore for FY23. While the government has made clear that farmers will not be made to pay higher prices, the manner in which this will be paid for remains to be seen.

What does this mean for government finances? Estimates suggest the fuel tax cut could impact revenue by up to Rs 100,000 crore (the final quantum depends on global oil prices). A large portion of the cut is expected to be made up with higher-than-budgeted tax revenues, especially from the Goods and Services Tax. But if inflation proves to be more sticky or the war in Ukraine grinds on growth, it would inevitably take a hit making it impossible to continue with this strategy of insulating consumers.