In a surprise move, the central bank increased repo rate by 40 bps and the cash reserve ratio by 50 bps, rattling equity and bond investors. Many economists see inflation around 7 percent levels in the near-term and do not rule out a 25 bps rate hike in June 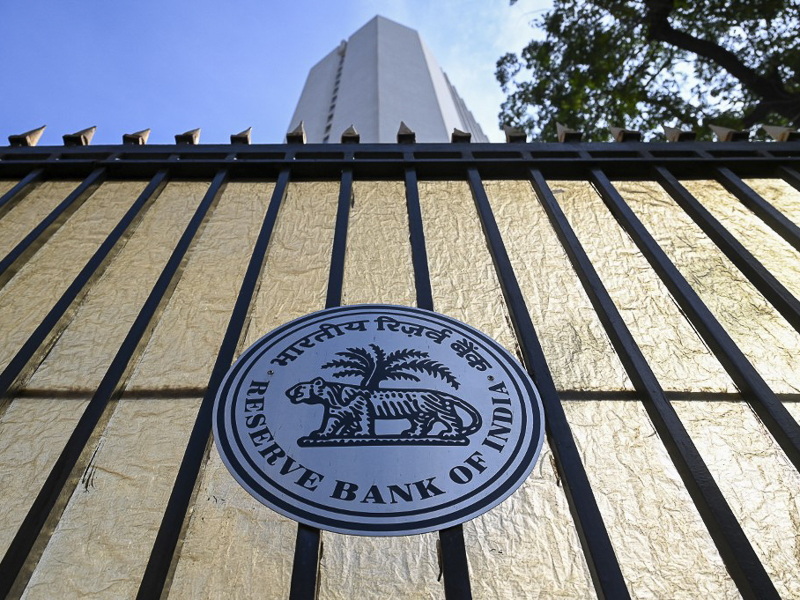 Economists had widely expected the central bank to change its stance to neutral before ushering in rate hikes of 100 to 125 basis points in the current calendar year Image: Punit Paranjpe / AFP


After nearly two years, the Reserve Bank of India (RBI) has partly come full circle on interest rates. In a surprise move on Wednesday, its Monetary Policy Committee (MPC) unanimously voted to hike the benchmark repo rate by 40 basis points (bps) to 4.4 percent with immediate effect in an off-cycle meeting.

The rate setting panel, however, decided to remain accommodative even as it said it will focus on gradual withdrawal of liquidity to tame inflation while supporting growth. In line with the objective of policy normalisation, the central bank increased the cash reserve ratio (CRR) by 50 basis points to 4.5 percent with effect from May 21, which will drain out close to Rs 87,000 crore from the system.

The MPC finally pulled the trigger on inflation after holding benchmark rates for eleven consecutive times. The MPC had slashed rates by 75 basis points in response to the coronavirus pandemic in March 2020. In less than a month, the MPC had further cut rates by 40 basis points in May 2020.

“Accordingly, the decision of the MPC today to raise the policy repo rate by 40 bps to 4.40 percent may be seen as a reversal of the rate action of May 22, 2020 in keeping with the announced stance of withdrawal of accommodation set out in April 2022,” Das said. 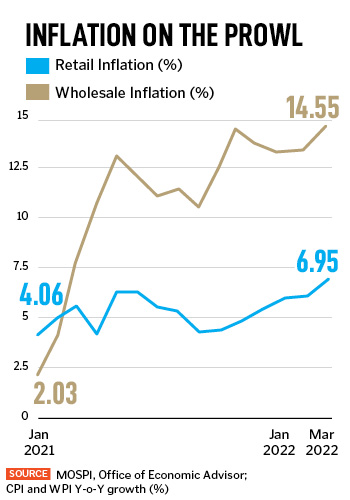 Economists had widely expected the central bank to change its stance to neutral before ushering in rate hikes of 100 to 125 basis points in the current calendar year. However, true to his words, governor Das has demonstrated the central bank’s resolve to” not be bound by any rulebook” and deploy “conventional and unconventional tools” to meet macroeconomic objectives.

Many analysts and economists were anticipating a repo rate hike of 25 basis points in June, rather than August, following the shocking retail inflation print of 6.95 percent in March. But the emergency MPC meeting on May 2 and May 4 caught markets and investors unprepared.

“The markets, mollycoddled by previous RBI comments and supporting the RBIs earlier stance, will feel cheated. The ‘shock and awe’ was visible with bond yields rising sharply, especially at the shorter end of the curve,” says Arvind Chari, CIO, Quantum Advisors. 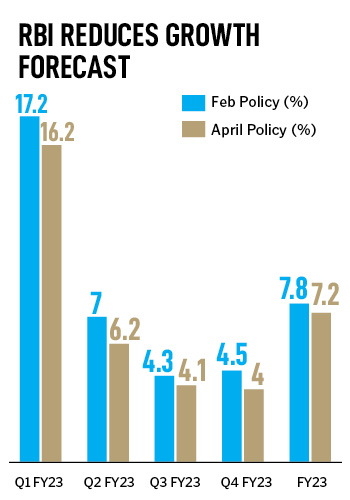 Ahead of the US Federal Reserve’s meeting on Wednesday, Das observed, “The normalisation of monetary policy in major advanced economies is now expected to gain pace significantly – both in terms of rate increases and unwinding of quantitative easing as well as rollout of quantitative tightening.”

Rampant and stubborn rise in inflation over the past several months has compelled the RBI to shift focus to its inflation mandate of price stability even though durable growth has not picked up significantly.

Confronted by elevated and sticky inflation, Das said, “There is the collateral risk that if inflation remains elevated at these levels for too long, it can de-anchor inflation expectations which, in turn, can become self-fulfilling and detrimental to growth and financial stability.”

In the coming month, inflationary pressures are most likely to increase and pinch consumption. There are several upside risks to the Reserve Bank’s inflation estimate of 5.7 percent in FY23. HSBC India’s Chief Economist Pranjul Bhandari expects consumer price index (CPI) inflation to average higher than the consensus 6.8 percent in FY23. “A series of rate hikes are likely to follow, starting with a 25 basis repo rate hike in June. We expect the terminal repo rate at 5.5 percent by mid-2023,” she says.

“While a back-to-back hike in the June 2022 policy is not yet certain, we do foresee an additional 35-60 basis points of rate hikes in the remainder of H1 FY2023. If a de-escalation in geopolitical tensions cools commodity prices, then we expect a pause to reassess the impact on growth, followed by another 25-50 basis points of rate hikes in CY2023,” says Aditi Nayar, chief economist, ICRA. 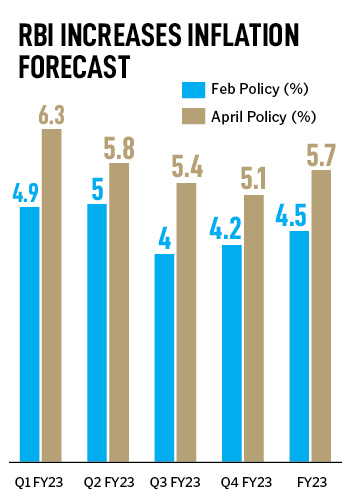 The domestic economy is already reeling under the spillover effects of rising global food and crude oil prices. Escalating geopolitical tensions have led to export bans, supply disruptions and shortages, stoking price volatility. The marked increase in edible oil and fertiliser prices have steeply pulled up food prices in the country. High fuel costs plus dearer raw materials have accentuated price pressures and could potentially drive retail inflation to around 7.5 percent levels in April.

Suvodeep Rakshit, senior economist, Kotak Institutional Equities, says, “While inflation is unlikely to decline in the near term, RBI’s move should help in pushing real rates towards neutral over the next few quarters. Rates across the curve will reprice factoring in a markedly more hawkish RBI.”

However, the central bank assured there would be adequate liquidity in the system to support credit offtake and economic growth. “We will focus on a careful and calibrated withdrawal of pandemic-related extraordinary accommodation, keeping in mind the inflation-growth dynamics,” said Das.

“Sustained high inflation inevitably hurts savings, investment, competitiveness and output growth. It has pronounced adverse effects on the poorer segments of the population by eroding their purchasing power. I would, therefore, like to emphasise that our monetary policy actions today – aimed at lowering inflation and anchoring inflation expectations – will strengthen and consolidate the medium-term growth prospects of the economy,” Das said.