In the backdrop of rising inflation and global central banks' liquidity tightening, calls for the RBI to act similarly and start raising interest rates have grown. Meanwhile, India's pace of growth post-pandemic remains patchy. All these, and an aggressive government borrowing programme have raised bond market concerns further 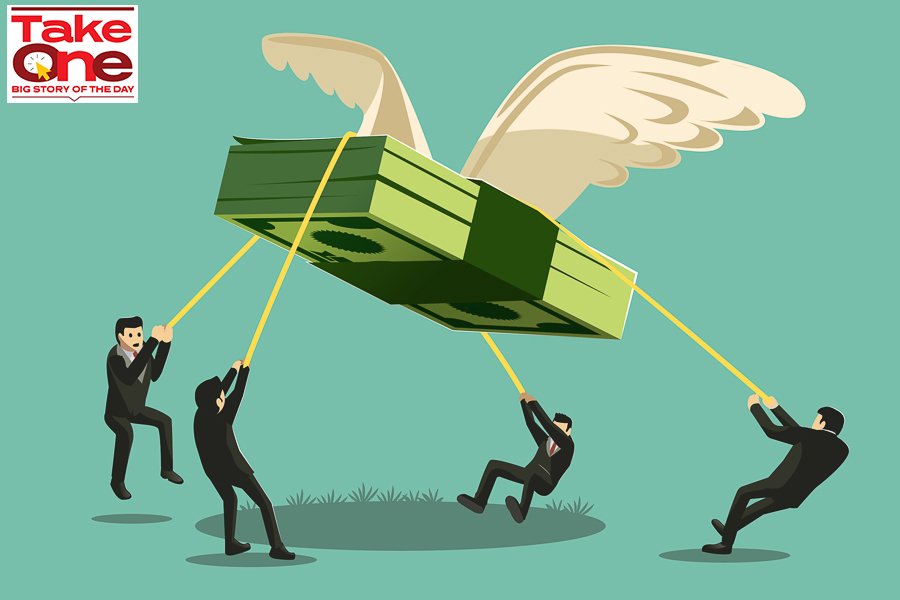 India’s 10-Year bond yields have been climbing relentlessly. They are close to their higher levels since July 2019
Image: Shutterstock

The upcoming Reserve Bank of India (RBI) monetary policy meeting, scheduled to be announced on February 10, has assumed significance due to a range of economic issues which need to be resolved. India’s wholesale price-based inflation is in double digits since April 2021 and needs taming, even as the governor Shaktikanta Das says the bank has remained ‘accommodative’ in its policy stance in an attempt to revive and sustain growth, as India rides out of the impact of the pandemic.

But, on the other side, India’s 10-Year bond yields have been climbing relentlessly. They are close to their higher levels since July 2019 (see chart), spooked by the global tightening of liquidity from central banks, increasing inflationary concerns and a rise in the government’s own borrowing programme, as announced in the FY23 budget. Higher bond yields not only put pressure on interest rates, but also lead to a rise in lending rates.

Das will be keenly heard by the market on inflation, trajectory of rates for 2022, the stance of the bank relating to growth and the message to the bond market. The market will also want to hear the RBI’s commentary in a scenario when several central banks have started to embark on tightening of liquidity measures.

The US Federal Reserve in January-end said it will raise interest rates soon for the first time in three years. The Bank of England, this month, hiked rates for the second time in three months and the European Central Bank has abandoned its stance of not raising rates in 2022, while recognising inflation risks. “Global tightening of liquidity, the US Fed turning hawkish, the rise in inflationary concerns across economies and the increase in the government borrowing are the reasons for the rise in yields,” says Devang Shah, co-head, fixed income at Axis Mutual Fund.

The RBI is unlikely to raise the repo rate but it may hike the reverse repo rate (the rate which the central bank pays banks when they park their excess liquidity with it). The reverse repo rate has been kept unchanged at 3.35 percent since May 2020. The gap between the two rates is now likely to be normalised soon.

But will the RBI signal the end of its accommodative stance and go neutral? The minutes of the RBI’s last policy meeting revealed that all members of the monetary policy committee (MPC), except Prof Jayanth R Varma, voted to continue with the accommodative stance as long as necessary to revive and sustain growth. The jury is out but experts we spoke to suggest it is likely to be signalled at the upcoming policy. 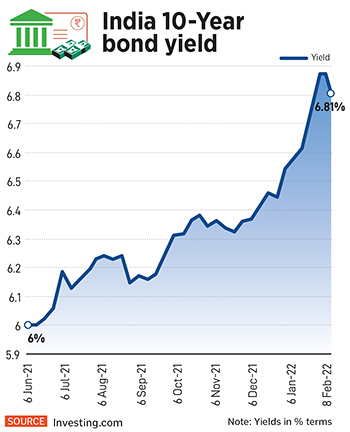 Nomura India’s Business Resumption Index rose to 113.2 for the week ending February 6, from 104.8 levels the week earlier, indicating 13.2 percentage points over the pre-pandemic level. All critical elements such as mobility, the labour participation rate and demand for power, rose week on week. “The improvement is indicative of the ebbing third wave and lower public risk perception…” analysts Sonal Varma and Aurodeep Nandi said in the note to clients.

“The RBI, in its monetary policy, has to move from accommodative to neutral to tightening. But this has to be done in a syncronised and calibrated manner,” says Dhawal Dalal, chief investment officer, fixed income, Edelweiss Asset Management. Axis’s Shah also suggested that there is a “50:50 probability of a change in RBI's accommodative stance to neutral”.

The shift in stance might also signal how soon the RBI will start to hike rates and show how worried the RBI is to tackle inflation. The WPI eased marginally to 13.56 percent for December 2021, from 14.23 percent in November as minerals, petroleum, food articles and natural gas fell, but remains in double digits for the ninth successive month. The RBI expects the Consumer price index (CPI), which was at 5.59 percent in December, to touch 5.7 percent for FY22. The Finance Ministry’s Economic Survey has already warned of the risk of ‘imported inflation’ due to high global energy prices, with crude oil testing the $95-per-barrel mark this week.

Will the RBI continue to signal the Omicron variant as a concern, even though new cases and the positivity rate have dropped across Mumbai and Delhi?  This appears likely and with growth expected to be uneven for the coming 12 months, the central bank is unlikely to raise the repo rate in this week’s policy meeting. The Economic Survey pegs India’s FY22 GDP at 9.2 percent coming from a low base and 8-8.5 percent GDP for FY23. Most economists and financial institutions have forecast India to grow by between 7.8 to 9 percent.

Das has another task on hand, to comfort the bond markets. Bond yields usually front-end interest rate hikes and have been rising over the past six months. Much of the negatives have already been priced in but the RBI cannot afford yields to keep pushing northwards. “The RBI should walk the talk, it must comfort market forces. They cannot allow yields to fly,” says Edelweiss AMC’s Dalal. Last year, the RBI had purchased government securities through open market operations (OMO) to cap yields.

The US Federal Reserve chair Jerome Powell, in January, said they would normalise their policy soon by ending interest rates in 2022 and a faster-than-expected withdrawal of their asset purchase programme, by March 2022, to support the economy. Powell said “several” rate hikes could be expected and a Reuters poll showed three hikes during 2022.

Another concern is rising crude oil prices, which, as it inches towards the $100-per-barrel mark, could spell huge pain for India. India meets about 85 percent of its crude oil demand through imports. This surge in prices not only hurts ‘import inflation’ but could also threaten to derail the fiscal deficit targets, if larger borrowing is required. All of this has led to bond yields going up further.

With the macro-economic concerns rising after global central banks have announced liquidity tightening measures, local sentiments have also worsened. In the FY23 budget, the government announced a gross borrowing of Rs 14.95 lakh crore for the year ending March 31, 2023, against Rs 12.05 lakh crore budget estimates for the current FY22 period. 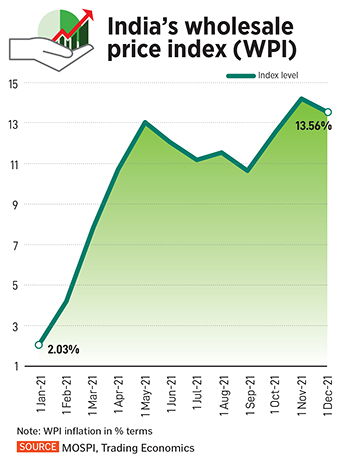 In a separate development, India expects to be included in the global bond indices, a move which Morgan Stanley Research had said was “imminent” in a report last October. If this inclusion takes place, it might attract more than $170 billion in bond inflows into India in the next decade and lower borrowing costs. The report expected India to be included in two out of the three major global bond indices in “early 2022”, its chief India economist Upasana Chachra had said.

This move would trigger index related inflows and allocations from global bond investors, and help corporates get improved access to capital and drive demand for other corporate fixed income securities. But this is yet to take place and has soured the bond market mood.

“The upcoming monetary policy committee meeting will convene in the shadow of FY23 budget, which rightly maintained its focus on growth but at the expense of high market borrowing,” says Churchil Bhatt, executive vice president (debt investments) at Kotak Mahindra Life Insurance. “In the upcoming meeting, the MPC will likely acknowledge the inevitability of policy normalisation and the challenges we face as global central banks accelerate their fight against inflation,” Bhatt said.

Bhatt, like other experts, forecasts a reverse repo rate hike in the February policy meeting and subsequently the MPC will change its accommodative stance to neutral. “With policy normalisation underway, RBI’s support to bond markets is expected to remain constrained going forward even as headline inflation remains within the RBI’s target band. Tough as it may be, [the] RBI will have to non-disruptively juggle between its objectives on policy normalisation and management of government’s borrowing programme in FY23.”

Another issue which has been a cause for concern for the bond markets is that a lot of the estimates relating to growth, fiscal deficit and inflation are coming with caveats, and not clear convictions. The fiscal deficit for FY23, pegged at 6.4 percent, is feared to rise higher and this is hurting sentiment.

“Policy and decision-makers are talking about hope that the third pandemic wave weakens; that crude oil prices do not shoot up further and that more allocations should not be made towards MNREGA. There is no clear assessment and this is spooking investors further,” said a bond analyst with an equity research firm.

With so many moving pieces and clarity from the RBI likely to emerge over the next two policy meetings, fund managers advise potential debt investors to eye passive exchange traded debt funds (ETFs). These would be cheaper than actively managed funds; also it would be more prudent to be patient and make investments in multiple tranches in such medium to long duration funds.

ETFs have been the most popular category of funds for investors in 2021. This category had assets worth Rs 3.84 lakh crore in 2021 compared to Rs 3.61 lakh crore for liquid funds, according to Crisil data. Several new asset management companies have, in recent months, launched various passive debt ETFs, at a time when timing and double-guessing the market and index movements have become more difficult. Thus while equity-oriented mutual fund schemes might have shown better returns on the back of record market highs, the average alpha for actively-traded funds continues to fall.

This shifts the focus back to how the RBI will react to the changing global macro-economic environment and central bank liquidity tightening.

Tweets by @forbesindia
Gokul Shrinivas: Putting energy conservation in your palms
We want to be the neural network for commercial buildings: Gokul Shrinivas—Forbes India 30 Under 30 2022